Finally, "a bulletproof black man": The perfect timing of "Luke Cage" and the black nerd renaissance

My first look at Netflix's new Marvel superhero series fills me with joy, hope and pain 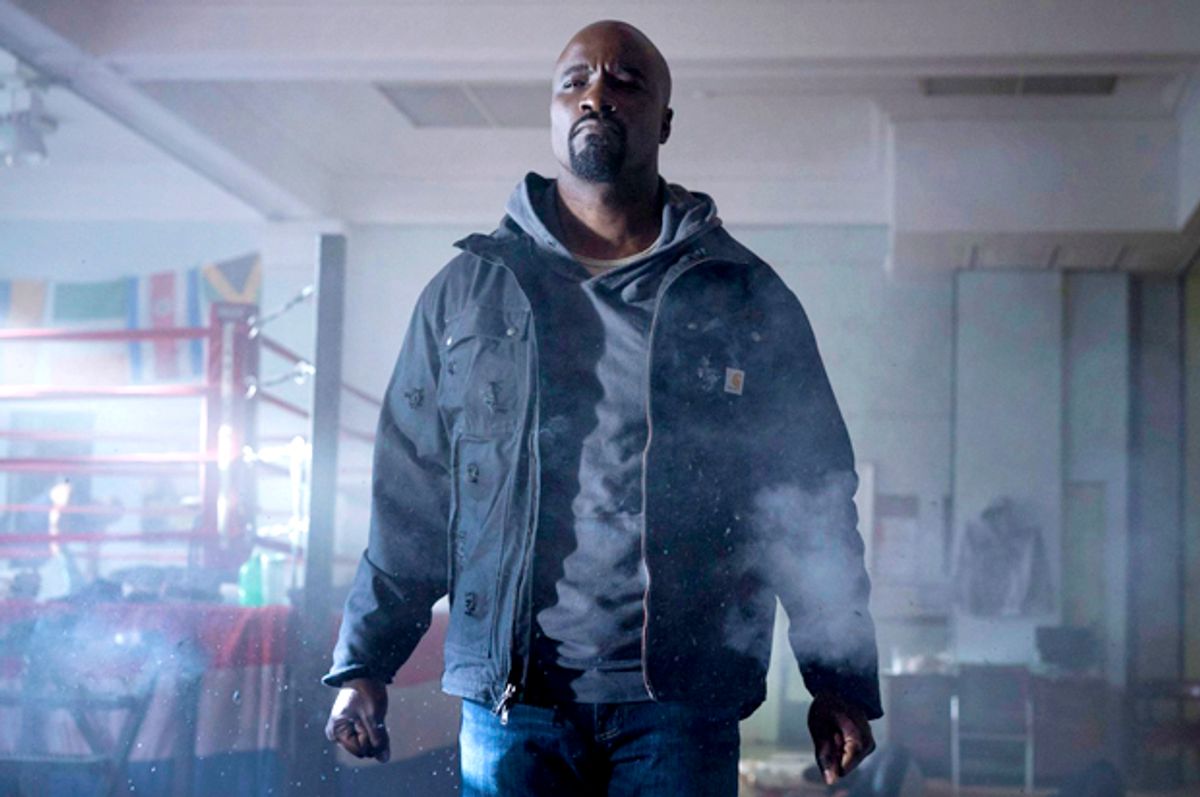 Black nerds have never really had it easy. Even as Marvel has taken over the cinematic universe and increased interest in comics, making it cool to like superheroes, my fellow members of the African diaspora have remained precariously positioned between the closet culture of nerd-dom and the double-edged white supremacist sword that imposes whiteness onto both traditional education and superheroes.

But no more. When I saw the new “Luke Cage” teaser, I felt an excitement I hadn’t felt since I was six years old and watched “Static Shock” on Kids WB – the first time I’d seen a black superhero. But there was something more to the experience than excitement. I felt a strangely strained catharsis watching one of my darker brothers on the screen — a feeling of joy tethered to pain, the kind of tense linkage that makes no distinction between tears mothered by happiness and grief.

The teaser’s conclusion immediately confirmed for me that a kind of Black Nerd Renaissance is occurring across American culture, in which black people are finally getting a chance to contribute poetic, intelligent and positive representations of black people that aren’t instantly undercut by white supremacist depiction. The first hint I had at this renaissance was in the Sundance award-winning sensation “The Birth of a Nation,” Nate Parkers’ depiction of Nat Turner, a man whom I thought I’d only see in a film if I wrote him myself. Another hint came when I learned Roxane Gay would likely be developing superheroes that were black women within the "World of Wakanda." It’s about damn time.

When you look at the history of racial myth-making in this country, the whole concept of black people fighting crime is borderline revolutionary. I felt that when I watched “Static Shock” as a child, years before I could put it into words and years after of soaking up the idea of my people as thugs. Purposefully thickened with the passage of generations and policies, criminality has been imbued in black people before the dawn of this country. It was only when I tried to understand why Netflix’s upcoming hit meant so much to me that I was rocked once again by the deadly consequence of that association.

More times than I’d like to remember, my eyes have been stained by watching videos of black men, women, trans and non-binary people shot down in the streets by police officers. These government employees always have excuses for why they murdered someone who was neither armed or capable of killing them, excuses that usually come down to fear. Ever since George Zimmerman walked free, I’ve known their fear could mean my death. The Facebook auto-play of extrajudicial killings has become so frequent in my life that my daily reality has followed me into my unconscious and I’ve had nightmares about running from the police. At times, all I’m left with is rage to save me from my socially-induced depression. In the context of this immortalized trauma and death, Luke Cage becomes a vital representation of something we’ve always wanted to be: physically invulnerable to the many slings the world sends our way.

This was on the executive producer and showrunner Cheo Coker’s mind when he worked on the show. As a part of a panel at San Diego’s Comic-Con, Coker said, “The world is ready for a bulletproof black man.” Perhaps this was the same type of sentiment spread across New York during the Harlem Renaissance when the Senate refused to pursue the Dyer anti-lynching law. The historic parallel reminds us that it’s no coincidence that at the same time black people are unjustly shot down in the streets of the United States by police officers, our people are fighting for better art and representation. It is not a coincidence that nearly a year after Sandra Bland was murdered, a study reveals that more black women are enrolled in higher education than any other group in the United States.

We know counter-narratives matter, in the same way more diverse books matter. In this intellectual Juneteenth, we enter into the continuum of resistance that our ancestors started. We’ve been told by the media that we’re violent criminals, that we don’t care about education, that we don’t take care of our families. These narratives still haunt our existence in a way that makes every day as a black person, in a literal sense, death-defying. Crime-fighters like Luke Cage, geniuses like the new Iron Woman, and tenderhearted teens like Miles Morales push back against these centuries-old ideas.

The greatest art, to me, contends with the society and world it was made in. Luke Cage having a story of his own points out we live in a time of contradiction and debatable progress, a time when playing Pokémon Go can potentially get a black person shot and when that same massively-popular app can take a staunch, pro-Black-Lives-Matter stance by memorializing Tamir Rice with no substantial repercussion.

As depressing as it is, when I see black people in starring roles that don’t hurt our people, it says that we’re not all just dying. We’re creating and fighting, both with new social systems and characters that change how people view the world. The fact that these destructive narratives we’ve been fed are the yoke of mass enslavement coupled with the fact that MacArthur Genius grant winner Ta-Nehisi Coates, the writer of the greatest modern argument for reparations, is crafting the Black Panther comic and has influenced its mostly-black film adaption demands that we fundamentally question the world that we’ve been given. It’s the first step to changing it.

So to my black nerds bleeding from isolation, neglect, and constant assault, I see you and we ‘gon be alright. We’re like Saiyans: what doesn’t kill us literally makes us stronger. We’re going to continue to fight in the streets, behind our keyboards and on every screen we can find until there’s an end to the same recycled white supremacist garbage that’s been plaguing us for centuries.

Oh, and if someone isn’t working on a “Static Shock” pilot or something, I’m going to come at DC Comics’ neck.