"Always be a fighter”: Sharon Jones reflects on her music, her health and her new documentary

Salon talks to the Dap-Kings singer about "Miss Sharon Jones!" chronicling her life on the road and in treatment 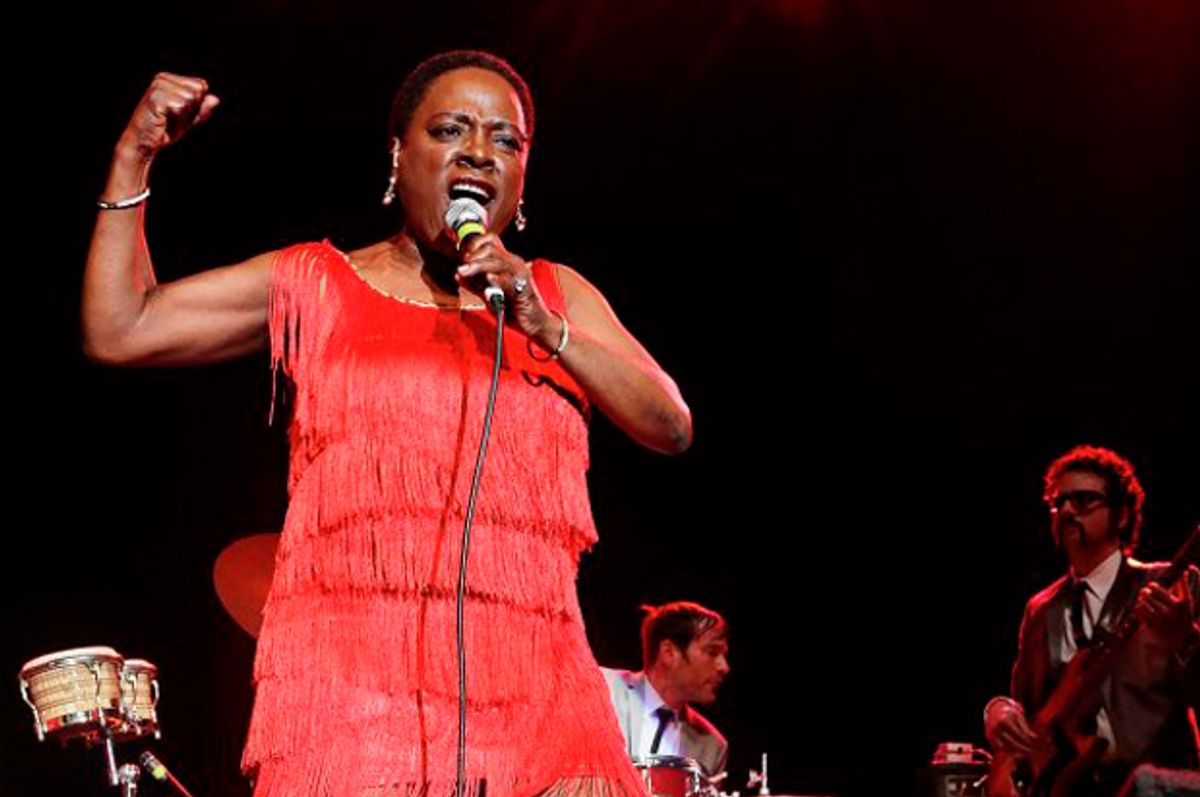 As anyone who's seen Sharon Jones & The Dap-Kings in concert will testify, it's impossible to resist the charisma exuded by the soul/funk/R&B troupe. That's mainly due to frontwoman Jones, who boasts an unstoppable, gospel-inspired voice and whirling dervish stage moves. At a summer 2015 concert when Sharon Jones & The Dap-Kings opened for Tedeschi Trucks Band, I saw first-hand how the audience was completely, singlehandedly won over by the sheer force of her stage presence—moving from disinterested to totally spellbound within the span of the set.

A new documentary, "Miss Sharon Jones!" (which opened in theaters in New York City July 29 and in other cities after that) certainly contains plenty of mesmerizing concert footage. But the emotional, compelling film also follows Jones' 2013 battle with stage two pancreatic cancer—chemo treatments and their aftermath, moving in with a friend to heal, balancing getting better with musical demands—and the impending launch of the Dap-Kings' Grammy-nominated 2014 album, "Give The People What They Want."

The idea for the documentary was floating around for a while before Jones' manager approached her to see if she would be interested in being featured. Since she was dealing with such serious health issues, she was hesitant at first. "When [my manager] hit me up with it, of course I was like, 'I don't know, man,'" Jones tells Salon. "And then, you know, I thought about my fans, the relationship I have with my fans. And I think it would be cool to let my fans see what I'm going through. Maybe I'll inspire someone who's battling cancer to fight. And that's when I chose to do it."

Thankfully, Jones' life story was in good hands: "Miss Sharon Jones!" director Barbara Kopple won Academy Awards for her documentaries "Harlan County USA" and "American Dream," and also directed and produced the Dixie Chicks' "Shut Up And Sing." In fact, Jones can't say enough good things about Kopple and crew—from "the love and the passion they have for doing movies" to the sensitivity they showed when dealing with her health. If she didn't want something on camera, or wasn't feeling well on a particular day, they respected her wishes and backed off. "I wasn't into a reality show," Jones says. "I didn't want to [have] a camera up in my face when I wake up early in the morning, like the camera slept with me. Nah, I didn't want that." She laughs.

Still, "Miss Sharon Jones!" doesn't sugarcoat much. For example, Jones talks about the racism and discrimination she faced growing up: During one particular striking moment while she's visiting her hometown of North Augusta, South Carolina, she points out a shop with an owner who used to sell black kids rotten candy, and also taught his parrot to greet customers with racial slurs. A few scenes involving the Dap-Kings can also be tense, as they involve discussions about tight finances and what being off the road means for the group. In another moment, Jones gets mad at the band over changing holiday dinner plans. "What I wanted was to be with them that Thanksgiving," she explains. "I wasn't with my family; they were the only family I was with at the time."

Jones admits she might have left this interaction out of the documentary had she seen it in advance, even though it concludes with them making up. "If you've been around me over the last 20 years, you know when I get angry, those things fly out of my mouth," she says. "You wouldn't see it anywhere else, but get me angry…." Jones dissolves into laughter, something that happens frequently in conversation. (That humor also crops up in "Miss Sharon Jones!": At one point, Jones sees a motorist pulled over by police and cracks herself up by singing and modifying the Dap-Kings' "Slow Down, Love" to fit the situation.)

These rougher edges ensure that while "Miss Sharon Jones!" is overall optimistic and positive, it's also realistic. In fact, the documentary is so compelling because Jones confronts her health and residual grief with unsparing vulnerability. A scene where she gets her hair cut and then head shaved in preparation for chemotherapy is particularly moving, as the gravity of the situation hits her while the cameras are rolling. At another point, Jones gets deeply emotional and teary-eyed because her mother (who passed of cancer in 2013) wasn't there to see her success.

"They caught me through a lot of pain," she says. "The first time I saw [the documentary] was actually the first showing in Canada [at the Toronto International Film Festival]. To see how they captured that sadness… Every time I see it, I cry still to this day. I've seen it three times now, and I still cry. They really caught it. All of those hours of filming me, so much stuff they had—how they were able to break down and use enough film to show that part of my life in an hour and a half, was amazing. You see the love they put into that documentary and capturing me."

In the end, "Miss Sharon Jones!" is all about the little moments of triumph in a longer, tough journey—those incremental steps forward to wellness, and the joy these smaller gestures bring. One of the most incredible scenes in the documentary depicts when she returns to church after a few months away. After briefly speaking in front of the congregation, Jones starts singing the gospel hymn "His Eyes Are On The Sparrow." As the performance progresses, her delivery and voice grows stronger—more powerful, animated and overcome by the spirit. As attendees cheer, clap and encourage her, Jones finishes the song and starts dancing in the aisles and near the front of the church for a full minute.

Jones says this scene showed one of her first times singing since a major June 2013 operation called the Whipple procedure that entails removal of her gallbladder, part of her small intestine and head of the pancreas; in fact, she had just started walking again. "In order for me to shout, that was a whole miracle," she says. "That was part of my energy coming back. That was part of me seeing, 'All right. I got it. I got a little bit of it back.' And it wasn't me doing that as a show—I was really anointed and taken over. Those are a spiritual thing in church. For them to capture that…That wasn't nothing they could say, 'Could you do that over in a different position?' That happened right there. That was natural."

Accordingly, when people watch "Miss Sharon Jones!" there are a few things in particular she hopes people take from it. "Always be a fighter," Jones says. "Follow your dreams. Just follow your heart. Because if you have something, a gift—don't let anybody deter you and take it away. Because if you go on out and continue to do the right thing and just stay positive and have a good aura…I mean, really, that's so important. You inspired people; people will feel that. Just keep on growing and be an inspiration.

"And I hope from that film someone who's struggling, battling cancer can see a different light," she continues. "You just enjoy the little time that you have if you think it's a little time. And I have plenty more time, but I'm enjoying what I have, and that's why I want to continue to get out here and perform."

Jones and the Dap-Kings are currently out on the road, including dates opening for Hall & Oates. She's also once again battling cancer and dealing with trying to find the right combination of chemo medicine to keep her balanced. "Medicine is supposed to be there to help me, not bring me down," she says. "So some of the chemo medicine I'm taking now, I told the doctor, 'I can't take this chemo anymore,' because it's tearing me down. It's getting to my legs, coming up my legs, my feet. … And the medication, if it got me all groggy and in la la land, and I can't function, I don't want to take that stuff. So it's a lot I'm going through now. [But] they cut back on it, I feel a little better. And we'll see what happens—they'll have to find another medication, I'll have to resort to something else. I'll take that next step."

Fittingly, however, she and the Dap-Kings recently released a driving song called "I'm Still Here," which is appearing on the documentary's official soundtrack, out August 19. The tune is a chronicle of Jones' life, covering her early days in North Augusta, move to New York City as a child, tenure as a prison guard and, later, global travels with the Dap-Kings. But it's also a deceptively simple statement of defiance: Despite people underestimating or discriminating against her—and despite "the big C"—the song declares she's still fighting with all her might and moving forward.

"In my act, the reason why I have that shouting is because shouting to me is my connection to the church, is my connection to why I'm where I'm at," she says. "I always feel that God blessed me with my gift. And being on the stage and being out here, to have so many people follow me—and knowing that out of all those thousands of people, [there are] different religions, different beliefs, people who don't even believe in God. …But they still out there, and they listen to my story and they don't want to shut me down. [They are] allowing me to be who I am and still be my fans. Those are true fans.

"Everything I do, my strength—why I keep going—is because of my fans. And because of my love for the music and the gift that God has given me. That movie caught all of that—I saw all of that in that little hour-and-a-half movie. I didn't even know if I had a story that was able to go like that. That's amazing to me."