The Tomatometer gender gap is real: We crunched numbers on reviews of 100 films aimed at women, and here's what we found 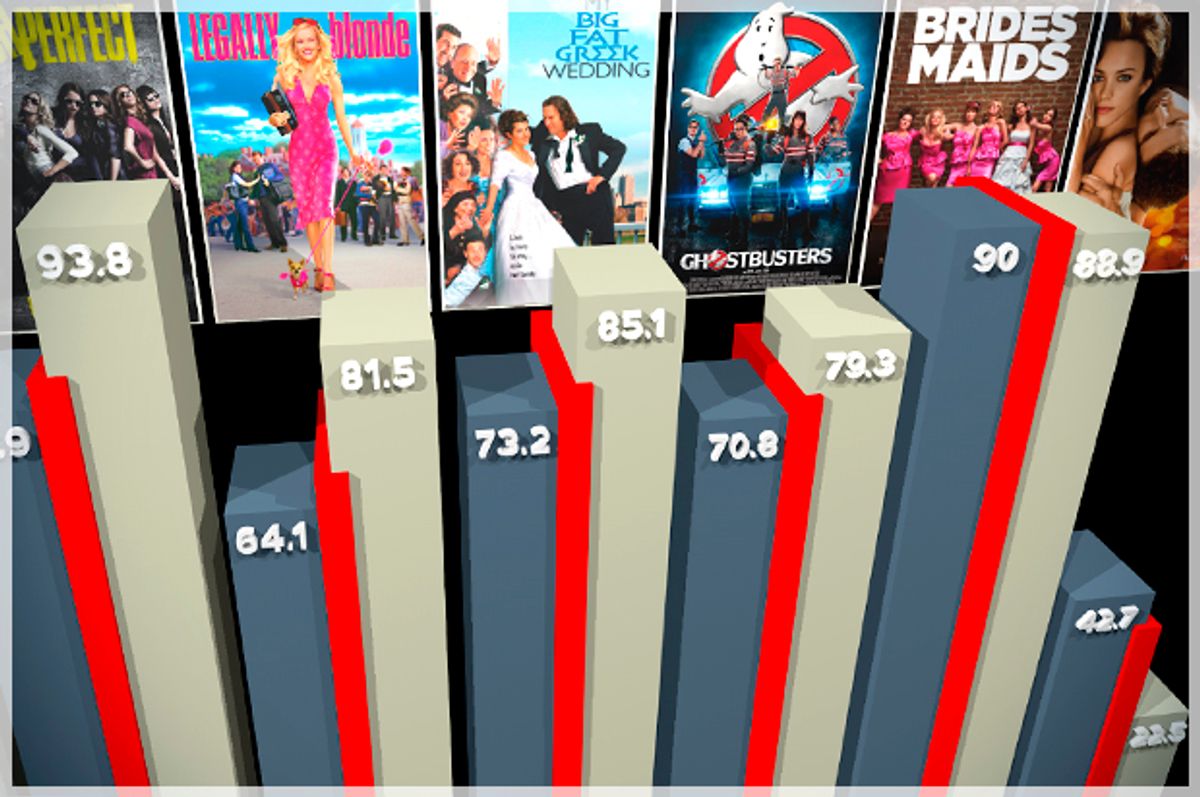 Who you gonna call when you need reviews of movies “for women?” Perhaps not Rotten Tomatoes.

The review aggregator site, founded in 1998, is a hub of film criticism on the Web, the most trusted benchmark for a film’s overall quality. But as Salon pointed out earlier this month, there appears to be a critical blind spot when it comes to movies starring women: The recent “Ghostbusters” reboot, directed by Paul Feig, received significantly higher scores from female critics than their male counterparts. While 79.3 percent of women who reviewed the film gave it a positive review, just 70.8 percent of male critics agreed with them. That’s a difference of 8.5 percent.

But the film, starring Leslie Jones, Kate McKinnon, Kristen Wiig, and Melissa McCarthy as a new generation of paranormal vigilantes, is actually the norm when it comes to how female-centric movies are received.

Looking at movies released since 2000, Salon surveyed 100 films on Rotten Tomatoes that were made and marketed with a female audience in mind. (The large number helps control for selection bias and human error.) These are movies that center women’s experiences, often written, produced and/or directed by women, and they range from “Sex and the City” to “Friends With Money,” Nicole Holofcener’s finely observed comedy of manners about class differences among friends. By and large, these films leaned toward the mainstream, recognizable hits you may have seen and have some opinion on (e.g., “Bridget Jones’s Diary”).

Although we think of the aggregate Tomatometer score as being the objective assessment of a movie's quality, the survey found there's more to the story when you break down the scores. These 100 movies, many pejoratively mislabeled as “chick flicks,” received fewer favorable reviews from men—8.4 percent fewer on average. “Ghostbusters” actually falls near the exact middle of the pack: The median gender gap was 8.7 percentage points. In total, 84 percent of the films surveyed received more positive reviews from female reviewers than from men. The movies that showed the greatest divide included “A Walk to Remember,” the Nicholas Sparks adaptation starring Mandy Moore and Shane West; “Twilight,” the 2008 vampire romance featuring Kristen Stewart and Robert Pattinson; “P.S. I Love You,” a melodrama about a woman (Hilary Swank) grieving the loss of her partner; “Divergent,” the teen dystopia starring Shailene Woodley; and “Divine Secrets of the Ya-Ya Sisterhood,” with Sandra Bullock and Ellen Burstyn. All of these movies got critical love from at least 20 percent more female critics than men—some as high as 32.1 percent.

There were a handful of cases where the scales were tipped in the opposite direction. More male reviewers liked “The Time Traveler’s Wife,” the Rachel McAdams-Eric Bana timelord romance; “Uptown Girls,” where Brittany Murphy plays the nanny to a precocious germaphobe (Dakota Fanning); “Monster-in-Law,” featuring Jane Fonda and Jennifer Lopez fighting over a man (Michael Vartan of “Alias”); and “Maid in Manhattan,” also starring Lopez.

Overall, male film critics really liked Jennifer Lopez movies, also giving “What to Expect When You’re Expecting” higher ratings than female critics. They also tended to favor romances where the male character is given equal weight in the narrative (“Two Weeks Notice,” “The Notebook”) or spunky comedies about relationships between women devolving into backstabbing. “Mean Girls,” “Bachelorette” and “Bridesmaids” all rated higher with men, as did Peyton Reed’s “Bring It On,” the 2000 cheerleading satire starring Kirsten Dunst. In the inverse, “The Other Woman,” a comedy about women bond together to get revenge on a man, was also better liked by men.

Men tended to dislike YA literary adaptations and most films marketed to teenage girls. “Pitch Perfect,” which was liked by 93.8 percent of female critics, was rated much lower by men—just 76.9 percent of male reviewers liked it. “Easy A,” Emma Stone’s breakout role, was hugely divisive, with a 14.2 percent gap between men’s and women’s reviews. Male critics also were likely to give a lower score to “weepies” like “Me Before You,” “The Hours,” “If I Stay,” and “Dear John” and most mainstream romantic comedies (see: “13 Going on 30”).

When the mass of male critics men rate movies for women lower than women do, it has a powerful overall effect on how these films are received by the public, bringing down the average Tomatometer of movies aimed at women by nearly six percent (5.77 percent, to be precise). Whereas female critics gave the films surveyed an average rating of “fresh,” with an overall rating of 62 percent, overall men scored them as rotten. Male critics liked these movies just 53.9 percent of the time.

Before we explore why these gaps in scoring happen, check out the full list of films and their scores:

Melissa Silverstein, the founder and publisher of Women and Hollywood, argues that these findings are a reminder that women’s voices matter: According to a June 2016 report from San Diego State University, women account for just 24 percent of film critics. “When women are not seen and heard, our experiences are missed,” Silverstein says.“When we think of criticism we always want to think about it in a binary way—that everyone will agree if a movie is bad and the vice versa. But that's just not true. We all bring our baggage and our experiences to every movie we see.”

Film critic Angelica Jade Bastien doesn’t believe that the gender gap in criticism is a matter of “conscious, malicious bias.” Bastien tells Salon, “But male critics, since the medium’s birth, have shaped the canon and the markers that are used to judge what makes a ‘good’ film, [and] it doesn’t surprise me that anything that targets women or is viewed as feminine is implicitly seen as less than.”

Stephanie Zacharek, the chief film critic at Time, notes that this is based in a historic bias against “women’s pictures,” the female-centric melodramas popularized by directors like Douglas Sirk (“Written on the Wind”) and Michael Curtiz (“Mildred Pierce”). “Even though men might like them, there’s been a stigma attached to them for a long time,” Zacharek says. “It still hasn’t gone away.”

Aisha Harris, a critic for Slate, adds that in the modern context, these films are referred to as “chick flicks,” which she calls a “pejorative, heavily-female-centric genre” primarily consisting of romantic comedies. She notes, however, that there’s no corresponding category for men.

If there’s a bias against “chick flicks,” surveys have shown that women don’t rate movies aimed at a male audience differently than men do. Even a cursory analysis bears this out: Superhero films like “The Dark Knight,“ “Deadpool,” “Captain America: Civil War,” and “Guardians of the Galaxy” were all rated higher by female critics, while scores were roughly equal for “X-Men: Days of Future Past.”

“As a woman you are raised to understand the perspectives of men,” says Bastien. “This isn’t just cultural conditioning, it’s a matter of survival. We’re able to identify with stories that have male leads in ways male critics weren’t raised having to do in the reverse.”

Silverstein believes that the point isn’t that women make better film critics, but that they “see the world differently — not better, not worse, just different.” That’s why she believes it’s important to have more women at the table, in order to make sure their opinions are heard.

“This is so crucial because when we dismiss content about women we are dismissing women,” Silverstein says."We should not expect all women to like all movies by or about women," she adds. "Life doesn't work like that. People will respond to movies differently based on their race, age, gender, ability—and it should be that way. But when you have so few female voices and voices of color, it is a problem because there is no critical mass. We need multiple opinions and voices. That's really what all this is about: more opportunities for more voices.”