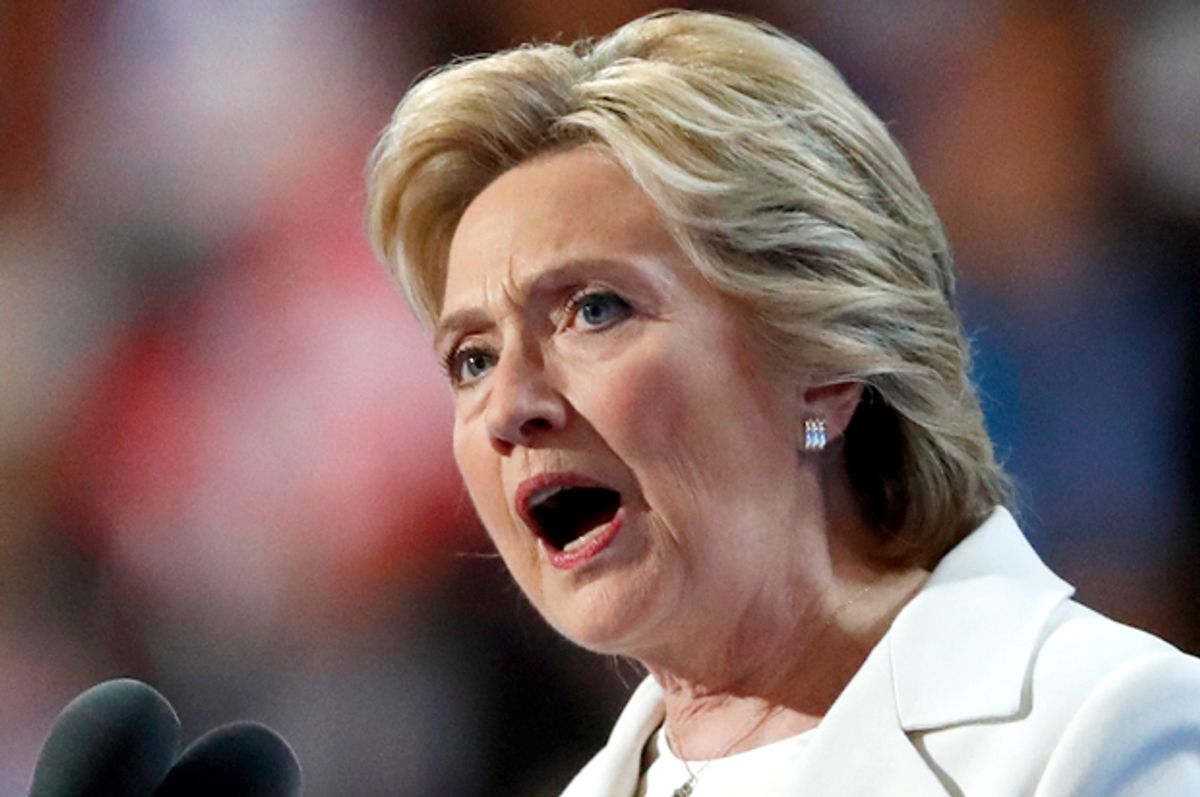 Progressive observers like Rachel Maddow were conflicted about Peter Thiel speaking at the Republican National Convention. They appreciated the fact that a successful, gay man was loud and proud on center stage. Yet they couldn’t handle that same proud gay man espousing policies that didn’t square with their worldview.

That’s about how I felt Thursday night as I watched the first American female clinch a major party’s nomination. I admire Hillary Clinton’s tenacity and place in history, the obstacles she has surmounted. But I do not admire that she was the first candidate, of any gender, to early this year deliver a speech on income inequality while wearing a $12,495 Giorgio Armani suit. I can’t fathom her praise of President Obama’s economic policies in wake of his doubling our national debt to some $20 trillion while piling on trillions more in unfunded liabilities.

If Hillary Clinton’s speech was more like her husband Bill Clinton’s speech earlier in the week, one that gave specific examples of bipartisanship and compromise, it’d be easier to admire more than just her place in history. Admittedly, her speech probably was further left than she herself would’ve liked, given the rise of Bernie Sanders.

Hillary Clinton’s talk Thursday night of progressive solutions to poverty rings hollow and incredibly out of touch, especially since Democrats have led a 50-year war, starting with LBJ’s “war on poverty” to try to mitigate this issue. Yet America’s welfare rolls have only expanded under Obama. Estrogen doesn’t qualify you to manage this troubling trend, nor should it disqualify you.

Her talk of minimum wage was misguided; essentially she wants to price young people, especially young people of color, out of the labor market, and for many, their first job. And she wants that minimum wage hike, as the Congressional Budget Office (CBO) reported, to go to rich families rather than poor families. The CBO looked at what an increase of the minimum wage to $10.10 from $7.25 an hour would do:

“The increased earnings for low-wage workers resulting from the higher minimum wage would total $31 billion, by CBO’s estimate. However, those earnings would not go only to low-income families, because many low-wage workers are not members of low-income families. Just 19 percent of the $31 billion would accrue to families with earnings below the poverty threshold, whereas 29 percent would accrue to families earning more than three times the poverty threshold [emphasis mine], CBO estimates.”

In English: families making almost $73,000 a year (almost 40 percent more than the median household income in 2015) would get 53 percent more benefit of this hike than families who are actually poor. How on earth does this make sense as a policymaker seeking to laser in on poverty? Leaders with XX chromosomes don’t magically negate the math around curing poverty.

Instead of minimum wage, she should have focused on the earned income tax credit, which supports work rather than punishes it. Hillary Clinton touched very briefly on the idea of profit sharing at corporations, one that would also be much more effective at closing any labor vs. capital divide so angrily and wrongfully exploited by rival Sanders.

Democrats in Philly touted that unemployment is down, but this is only because of under-employment and people leaving the workforce. This the least-employed American population in a generation.

On Wednesday in Philly, Obama blamed Republicans for the financial crisis, but it was Democratic policy, championed by Bill Clinton (and, admittedly, later embraced by George W. Bush to some degree), that forced banks to lend to subprime borrowers. Even Girl Power cannot overcome the laws of economics.

Hillary Clinton touted the Iranian deal (“we put a lid on Iran's nuclear program without firing a single shot” she said). But the deal has simply embolden Iran to continue its nuclear program due to a failed deal that does has repeatedly been violated by that theocratic and violent regime. The Obama administration has allowed for billions of American and Western dollars to now flow to the largest state-sponsor of global terrorism. And to a regime with no respect for human rights, or women’s rights, per Hillary’s United Nations mantra.

She said she’d know how to treat veterans well, yet this claim (along with Obama’s chest pounding Wednesday around reducing the number of homeless veterans) is supremely sad given the scandal surrounding healthcare for military families at the Department of Veterans' Affairs. This has unfolded under the administration she served.

The truth is that I agree with Clinton that her rival Donald Trump has “taken the Republican Party a long way, from ‘Morning in America’ to  ‘Midnight in America.’" Data show that putting women at the helm yields investing and business results that are steadier and more sustainable. I’m all for Hillary Clinton using her perspective as a woman to bring this value to the table. Yet if Clinton continues her path leftward, she’ll simply become a Sanders clone.