"History will not forgive them": Khizr Khan's warning ought to shake Republicans from their stupor 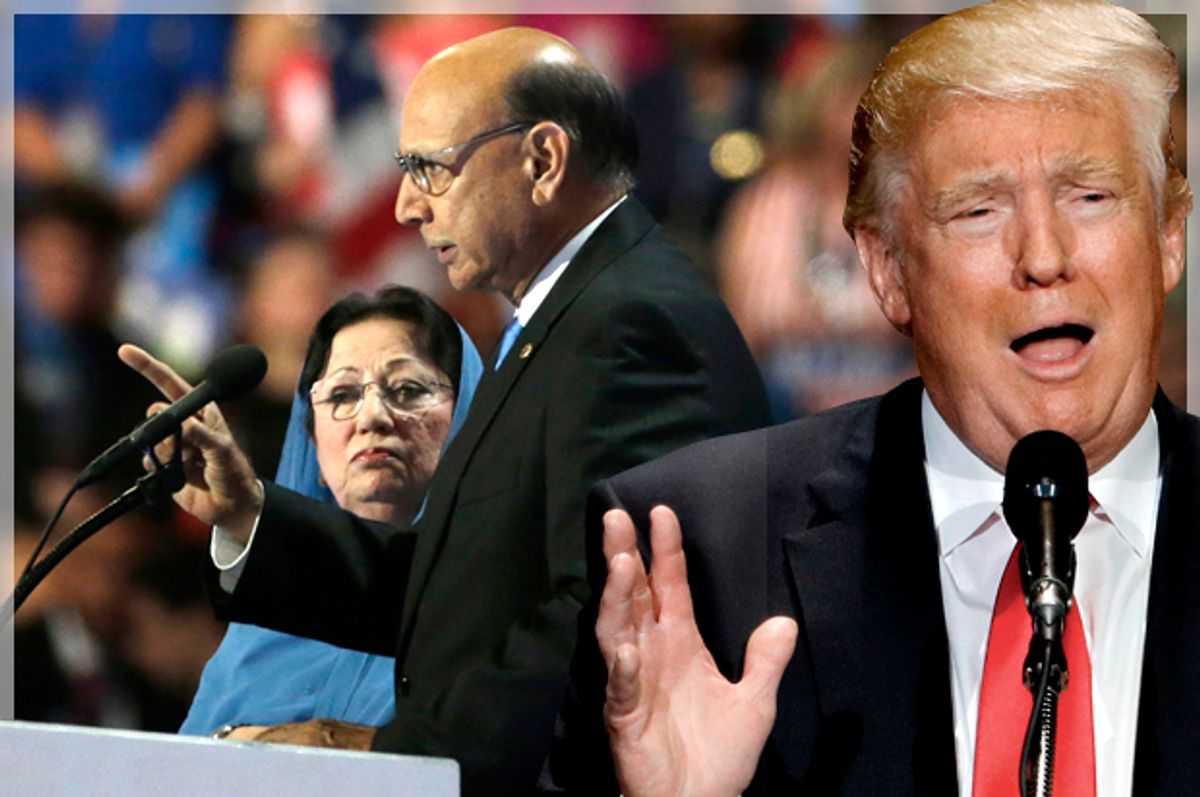 Ten years from now, people will remember one moment from the Democratic convention: An appearance by the bereaved parents of Army Captain Humayun Khan. Powerful and undeniably authentic, the remarks by Khizr Khan cut to the bone of the argument against Donald Trump. These were two immigrant parents, two Muslim-Americans, whose son died in defense of his country and men. They're a living refutation of Trump's ethno-nationalist narrative.

“Our son, Humayun, had dreams too, of being a military lawyer, but he put those dreams aside the day he sacrificed his life to save the lives of his fellow soldiers,” Khan said on Thursday night. “If it was up to Donald Trump, he never would have been in America.”

“Let me ask you,” Khan added, “have you even read the United States constitution? I will gladly lend you my copy. Have you ever been to Arlington Cemetery? Go look at the graves of brave patriots who died defending the United States of America. You will see all faiths, genders, and ethnicities. You have sacrificed nothing and no one.”

These are strong words. Trump isn't obliged to accept them, but there's a modicum of tact required given the circumstances. The right response was obvious: thank the Khans for their sacrifice, honor their son's heroism, and move on. Any other presidential candidate, Republican or Democrat, would have done just that. But not Trump. His instinct was to attack, and in this case insult a Gold Star mother. At this point, we expect crudity from the GOP nominee. But this time a non-comment seemed likely. After all, these are grieving parents speaking eloquently about the loss of their son, an Army Captain, who died in combat. Trump couldn't help himself, however.

“If you look at his wife, she was standing there,” Trump told a national television audience. “She had nothing to say. She probably, maybe she wasn't allowed to have anything to say. You tell me.” The implication is clear: Ghazala Khan wasn't permitted to speak because she is Muslim. And Trump wasn't misspeaking here. He doubled down in a separate interview with Maureen Dowd: “I'd like to hear his wife say something.”

This is a shameless slander. First, Ghazala Khan already spoke publicly about her son on MSNBC last week, during which she was reduced to tears. Still grieving, she allowed her husband to speak on the family's behalf at the DNC. But this really isn't the point. What Trump said was disgusting, untrue, and an affront to the entire Khan family.

It has to be said again: Donald Trump is a little man, a tiny tyrant puffed up by his own bullshit. He cannot countenance criticism of any kind, and the irony of his tough guy shtick is now unbearable. Here's a guy so internally weak that he's baiting the parents of a dead solider into a PR contest that he cannot win, and for what? Pride? Ego? It doesn't matter. This is not the stuff of leaders. It's also not new. Trump has blithely offended women, veterans, African-Americans, Mexican-American, and disabled people. Who's left? As James Carville told me, “First it was POWs. Now it's Gold Star moms. Next it'll be war widows and orphans.”

Every single Republican who looks the other way, who continues to excuse this insanity, will spend the rest of their political lives defending their supine inaction. With Trump we are well beyond typical political cleavages. As Vox's Ezra Klein put it, this isn't “simply Democrat vs. Republican, but normal vs. abnormal.”

Prominent Republicans, including Trump's VP nominee, have wisely distanced themselves from their nominee's remarks. Jeb Bush said “This is incredibly disrespectful of a family that endured the ultimate sacrifice for our country.” Sen. Lindsey Graham said “This is going to a place where we've never gone before...There used to be some things that were sacred in American politics.” House Speaker Paul Ryan issued an obligatory statement praising the troops and insisting “a religious test for entering our country is not reflective” of American values. Senate Majority Leader Mitch McConnell struck a similar note in a statement released on Sunday: “Capt. Khan was an American hero, and like all Americans I'm grateful for the sacrifices that selfless young men like Capt. Khan and their families have made in the war on terror.”

Let's be clear: None of these criticisms matter if the person making them still endorses Donald Trump for president. The rhetorical contortions won't work. You can't say, on the one hand, that Trump is a “textbook racist” who doesn't reflect American values and, on the other, say you're supporting him for president of the United States. This is more than a contradiction. It's cowardice.

There has to be a line. Politics has to give way to basic decency. Trump has become a mirror for everything base in our body politic. He doesn't respect the process. He doesn't respect the rule of law. And he's made himself a conduit for fear without any regard for the consequences. It's about “winning,” and nothing besides. Trump's campaign is a monument to our own hate and stupidity, and serious Republicans cannot support him without owning that.

Khan said it best this weekend. Trump is “totally unfit for the presidency” and Republicans have “a moral obligation” to withdraw their support." “History,” Khan added, “will not forgive them."

Is there any doubt he's right about that?