MTV Classic and the humbling of Generation X: To claim "Unplugged," we must face "Beavis and Butthead"

On the 35th anniversary of its first broadcast, the network revives the best and the worst of its vintage programs 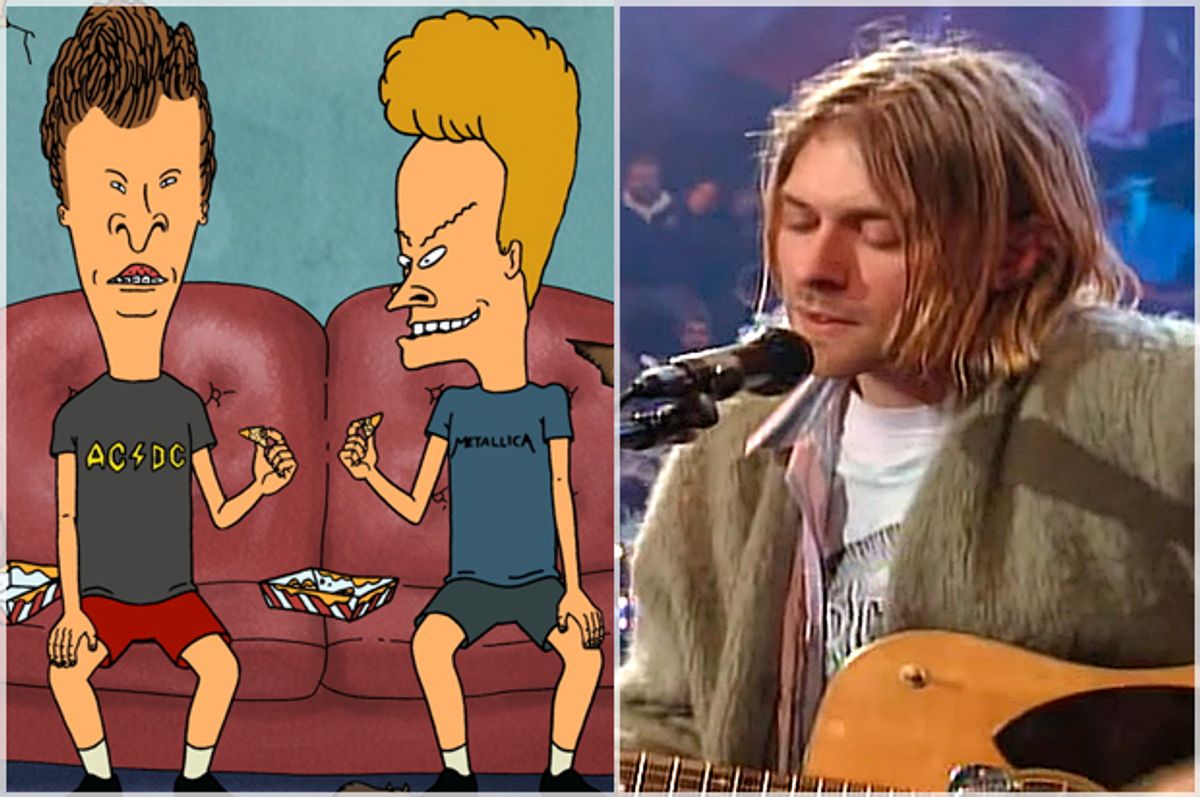 All joking aside, it’s one of the most important anniversaries in pop-culture history: MTV first broadcast 35 years ago today. And even an amateur historian can probably bring to mind the first video from that August day in 1981: “Video Killed the Radio Star,” by the Buggles.

The title seemed like a joke at first, but it ended up as prophecy: We’ll never know what we didn't hear because the music channel made visual image as important as music — bands that lacked the money or style to get into the rotation on “music television.” We do know that it helped destroy the reign of classic rock, helped usher in what’s been called a Second British Invasion of punk and New Wave and synth pop acts. The video became a serious art form, beginning, roughly, with Michael Jackson's “Thriller,” and leading to even more ambitious projects like Beyoncé's “Lemonade,” which isn't just heavily-nominated for MTV's own VMAs this year, but for four Emmy Awards as well. The impact of ’80s MTV is pretty well known to everyone who follows music and culture.

But MTV, interestingly, is choosing to draw attention to its ‘90s output by renaming its VH1 Classic as MTV Classic, starting today. Along with revisiting the first hour of its opening day, MTV Classic will focus on “Unplugged” episodes — Nirvana, Bob Dylan, Erykah Badu — and shows like “Beavis and Butthead” and “The Real World.”

It’s a pretty shameless stab at Gen X nostalgia, and given that this small generation is often overlooked, it will be welcome to many Xers.

But from what MTV has announced so far, it’s a real mixed bag: If you are the kind of Xer who remembers the ‘90s as the time when alternative and indie rock blossomed, when Liz Phair and Pavement and the Breeders made memorable videos, when the neo-soul originated, before you needed to follow every twist and turn of boy bands and Britney Spears, the new programming is a return to earth.

First, “Unplugged”: Though there were dull ones (post-‘70s Eric Clapton is boring whether he has a backup band or not), the return to acoustic instruments opened up the possibilities in rock music, and its influence went way beyond MTV. As good as Nirvana’s studio albums were, its “MTV Unplugged in New York” gets my vote for their greatest-ever recording. Their David Bowie and Leadbelly covers are as good as heartfelt songs like “About a Girl” and “Pennyroyal Tea,” and the song craft is laid bare. It makes you weep all over again about where Kurt Cobain could have taken this band.

Well, I wish I could be as enthusiastic about “Beavis and Butthead.” The ‘90s was about breaking down barriers and the erosion of the mainstream, so this was very much an end-of-the-century show. But it’s dare-to-be-dumb tone (“This sucks”) had none of the creative spark of a show like “South Park.” Mike Judge would go on to do much better work.

If MTV wants to remind of us its role in bringing oddball animation to mainstream television, it could revive Liquid Television. Between music by Devo’s Mark Mothersbaugh and adaptations of underground comics from Art Spiegelman’s RAW, this is about as genuinely edgy as ‘90s TV got. It may be licensing agreements that make this hard to bring back. Silver lining: The science fiction/secret agent series “Aeon Flux” will part of MTV Classic. (Why not reboot this one, too?)

“Jackass,” the early 2000s show MTV Classic is also bringing back, is hard to be nostalgic for. If you enjoy watching smart people do stupid things, why not follow American politics? (Seriously, at least some of those people are smart.)

Finally, whether you like it or not, the revival of “The Real World” could make a case for the ‘90s as MTV’s most influential era. But how to sum it up? This is a series that aimed, at least early on, to capture what the chemistry between urban young people was really like, and which got at gender issues, race, and the reality of AIDS in a way television has rarely examined. After a few seasons, though, it became a show mostly about shallow rich kids trying to make it as models and actors. And because it showed that documentary-style programming could transcend a PBS-size audience — that sounds good, right? — it made all kinds of reality television and Housewives shows possible. The world probably would have been better off without it.

So overall, it looks like MTV Classic — the title itself sounds like an attempt to make us feel old — is designed not to flatter Gen X, but to give us a sense of humility about our early years. It wasn’t just D’Angelo and “Smells Like Teen Spirit.” And I haven’t even mentioned Korn.