Ali Kurnaz, the Bernie delegate who raised a Palestinian flag at the DNC, says Clinton delegates tried to stop him 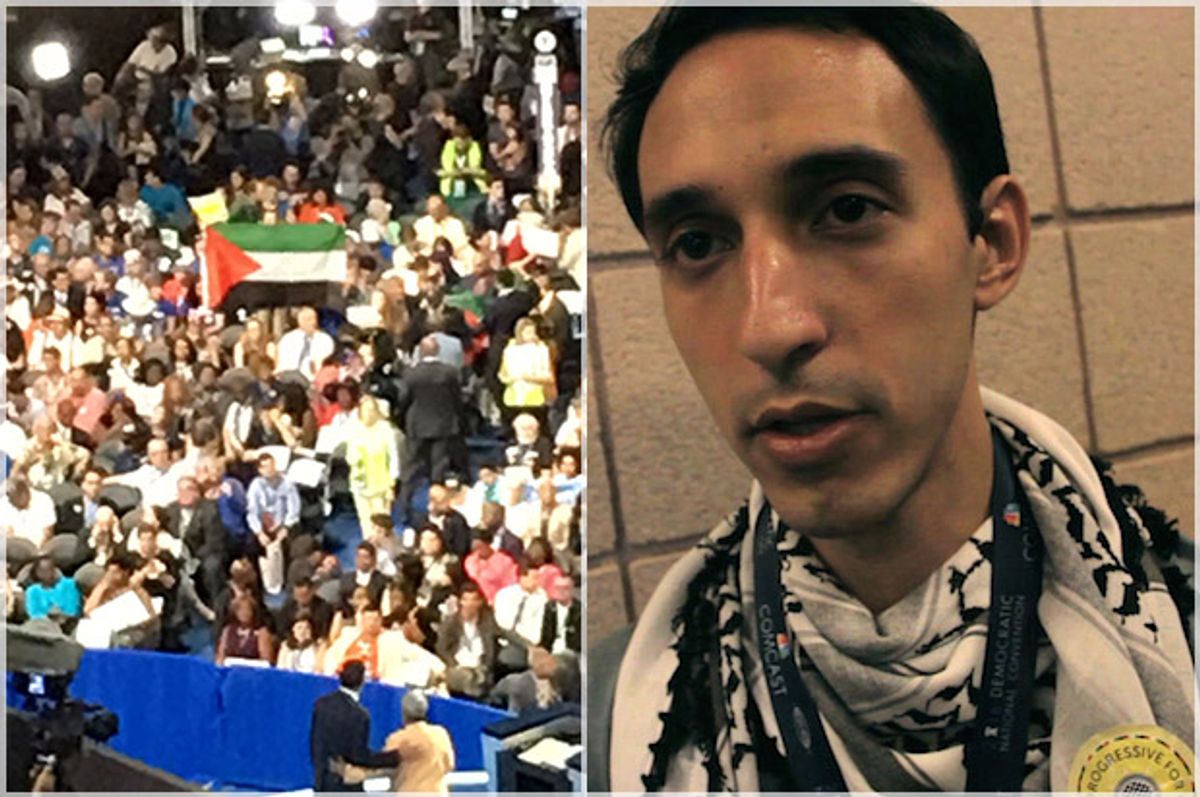 Florida Bernie Sanders delegate Ali Kurnaz, who raised a Palestinian flag in protest on the floor of the DNC (Salon/Ben Norton/Tamar Ghabin)
--

At the 2016 Democratic National Convention, Bernie Sanders delegates raised an issue about which the Democratic Party has long remained silent: Israel's oppression of the Palestinian people.

Throughout the convention, Sanders delegates booed, chanted and protested against U.S. wars, the Trans-Pacific Partnership, DNC bias and corruption and more.

One Sanders delegate from Florida, Ali Kurnaz, stood on his chair and held up a Palestinian flag during the vote to adopt the party platform.

Two other Sanders delegates from North Carolina, Ray McKinnon and Sebastian Feculak, also raised a Palestinian flag in protest on the DNC floor.

Throughout the convention, Ali Kurnaz wore pro-Palestinian symbols, including a kufiyah (a traditional scarf) and a pin that read "Progressive for Palestine."

Salon interviewed Kurnaz at the DNC, asking him about Israel-Palestine, Clinton and the future of the movement started by Sanders.

"The plight of the Palestinian people is an issue that often gets overlooked in American politics, unfortunately," Kurnaz said.

“The Palestinian-Israeli conflict has always been a taboo issue when it comes to Democratic circles," he continued. "It is because it’s always been something that both Republicans and Democrats agree on. And what they agree on is that we must be 100-percent, staunchly and unwavering in our support for Israel."

“That, I think, overlooks key problems, because, when we have an ally and we’re afraid to criticize our ally, it means that we overlook,” he added.

Kurnaz applauded Sanders for making progress on Israel-Palestine and coming out firmly in support of Palestinian rights. Sanders made the issue a key part of his campaign, and appointed several pro-Palestinian voices to the platform drafting committee.

In the Democratic presidential debate in Brooklyn in April, Sanders called out Clinton for ignoring the oppression of the Palestinians. He condemned Israel's disproportionate and indiscriminate attack on Gaza in the summer of 2014 and emphasized, "we are going to have to treat the Palestinian people with respect and dignity."

"It was kind of telling that this is an issue that is now being finally brought to the forefront of American policy," Kurnaz said. "And it is largely thanks to Senator Bernie Sanders for including it in his platform."

Kurnaz said he was greatly distressed by the debates on the DNC platform. He watched the Democratic platform drafting committee meeting in St. Louis and attended the meeting in Orlando.

At these meetings, the members of the platform committee appointed by Sanders proposed two Israel-Palestine-related amendments: One that would call for an end to Israel's illegal military occupation, and another that would acknowledge the U.N. report that Gaza will be uninhabitable by 2020.

Members of the platform committee who were appointed by Hillary Clinton voted unanimously against these amendments. (The Democratic Party platform is non-binding.)

“These are very commonsense amendments to our platform,” Kurnaz told Salon. “Unfortunately, the reason why they didn’t make it into the platform was because of the Hillary delegation.”

"I was very upset. And when I came to the convention, I decided that I wanted to make a statement," he added.

When Kurnaz stood up with the flag, he said the response to his protest “fell along the candidate lines.”

Fellow "Bernie delegates were very supportive," Kurnaz recalled. They helped him stand on the chair and keep his balance. Another Florida Bernie Sanders delegate, Ahmed Bedier, told Salon that he also helped Ali hold the flag.

Hillary Clinton delegates, on the other hand, were antagonistic, Kurnaz recollected. Clinton delegates from Florida held up their signs to try to block his flag. “One of them actually grabbed a corner of the flag and tried to tear it out of my hands,” he said.

In the interview, Kurnaz criticized Hillary Clinton for her staunch support of the increasingly extreme, far-right Israeli government. In November, Clinton wrote an open letter pledging to "reaffirm the unbreakable bonds of friendship and unity between" the U.S. and Israel — including its hard-line right-wing Prime Minister Benjamin Netanyahu.

Clinton promised to invite Netanyahu to the White House in her first month in office. Kurnaz said that her pledge shows that “Hillary Clinton is going to be very lopsided when approaching this issue.”

Kurnaz argued that this kind of extreme pro-Israel dogmatism will be an obstacle to peace, calling on Clinton to not invite Netanyahu to the White House and to instead “sit everybody down at a table and work this out.”

Despite the setbacks, the Sanders delegate and progressive activist said he will continue fighting.

“I have always been a progressive, and I think that Senator Bernie Sanders is finally the candidate who I’ve been searching for my entire political life,” Kurnaz said. “He has fought vigorously on a great deal of issues and he’s opened up conversations that have never really been opened up before.”

Sanders and his supporters have a nuanced perspective on these issues, he noted, “whereas unfortunately with Hillary Clinton’s delegation, with her policy positions that she’s put into our platform, it seems like it’s left vague and open to interpretation. And I believe that’s intentional.”

"There isn’t a cult of personality here," Kurnaz explained. "I think everybody my age, all the millennials, are galvanized by a 74-year-old white guy from Vermont with a funny accent. It’s because of the issues that he has been fighting for all of his life."

"And we want to continue that momentum by fighting for progressive values and instill those policies into our laws."