A dissenting opinion: Supreme Court is not a top priority in this election 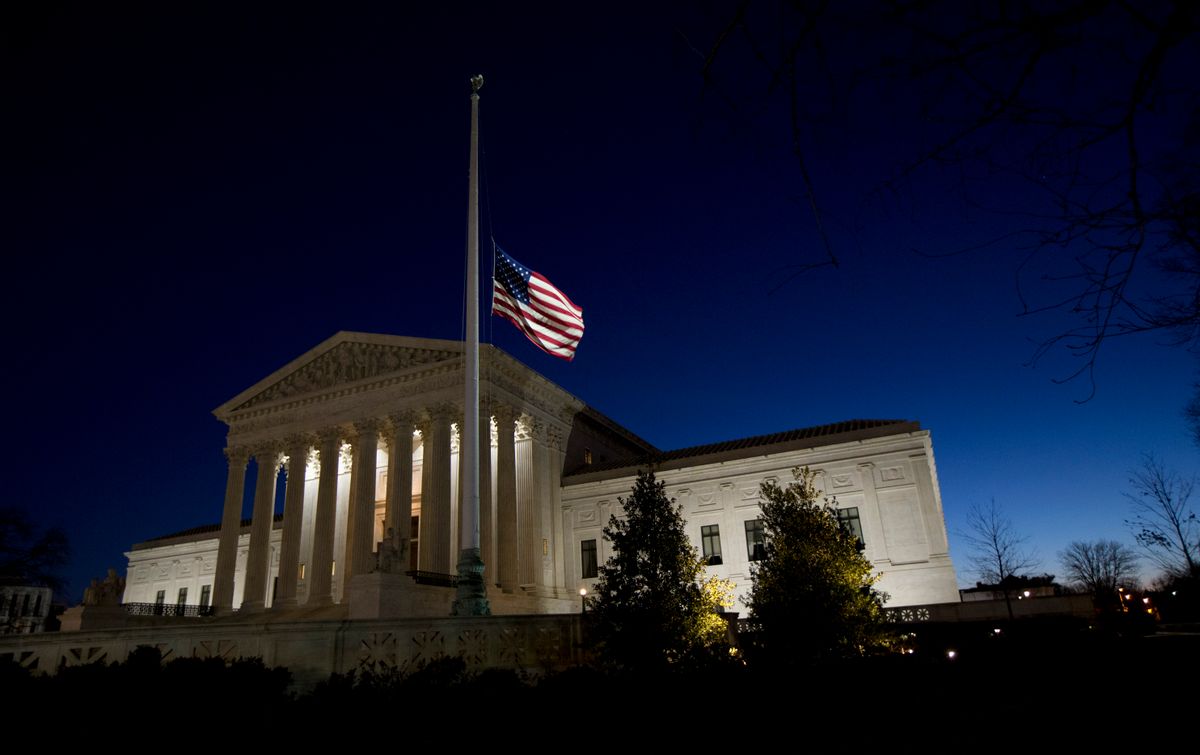 An American flag flies at half-staff in front of the U.S. Supreme Court building in honor of Supreme Court Justice Antonin Scalia as the sun rises in Washington, Sunday, Feb. 14, 2016. Scalia, the influential conservative and most provocative member of the Supreme Court, has died. He was 79. (AP Photo/Manuel Balce Ceneta) (AP)
--

One of Ronald Reagan’s first acts as president was to fire all of the striking members of the Professional Air Traffic Controllers Organization (PATCO), a union that had endorsed his election. In doing so, he was not making unions weak. He was taking political advantage of how weak they had already become.

When Congress enacted the Civil Rights Act and then the Voting Rights Act, it was codifying what the Student Non-Violent Coordinating Committee (SNCC), Dr. King and others were doing in the South. When Congress voted to cut off funding for the Vietnam war in 1974, it was just acceding to what the Vietnamese and the antiwar movement had already achieved.

When the Supreme Court ruled in 1886 in Santa Clara County v. Southern Pacific Railroad that corporations were persons covered by the 14th Amendment, it wasn't causing corporations to become powerful. It was affirming the power that corporations by then had attained.

Likewise, the Court’s 2010 Citizens United decision merely updated its earlier validation of the legality of corporate power using its money to impact elections. It was an ex post facto decision, not the invention of a new reality. (I am with Rev. Martin Luther King, Dr. William Barber, the late Vincent Harding and many others here. Our nation’s dominant values and ideology are the underlying problem. The role of big money in elections is a symptom, not the disease.)

Each of these examples, chosen from virtually limitless possibilities is entirely consistent with the original intent of the wealthy slaveowners who devised our government to protect their power and property. It was never their goal to design a machine that would or could overthrow or displace them. Nor would it have been reasonable to expect so.

As they saw it, the limited purpose of limited government was to deflect, delay and manage challenges they correctly anticipated from slaves, women, the poor or anyone motivated to create a more democratic system. That’s why it took an uprising even to get the Bill of Rights into the Constitution in the first place.

As we all are taught from childhood, what the founding men came up with is the divinely blessed holy trinity of the presidency (the Father), the bi-cameral Congress (the Son) and the Supreme Court (the Holy Ghost). It is no accident that despite some founders not being Christian, the structure of the government is congruent with the monotheistic, patriarchic Christianity that dominated the New World and the Old World at the time.

At the risk of stating the obvious, that structure remains firmly in place. Even though ever so slowly and painfully the franchise has been expanded, we are still allowed only to argue about the degree of rigidity with which the original contraption is to be worshipped and adhered to. Strict versus liberal constructionists, liberals versus conservatives, Fox News or MSNBC and so on remain the parameters of acceptable debate. (Well, not entirely. Throughout most of our history there also is a discernible and recurring difference between those who think the system the founding men created can be fixed, as distinct from those who favor something more radical. This is sometimes simply framed as reformers versus revolutionaries.)

Within those boundaries every presidential election cycle for as long as I can remember, some Democrats and some Republicans seek to frighten prospective voters into their point of view by blowing up three little words: The Supreme Court. Never mind anything else the argument goes, if the Democrat doesn’t win, a Republican will get to appoint bad people to the Supreme Court AND THEN THE SKY WILL FALL FOR SURE.

Like most discussions about our politics and culture, this is ahistorical. “Checks and balances” mumbo-jumbo notwithstanding, alarm over the composition of the Court ignores the role it was designed to play in the construction of the world’s first apartheid government.

A recent panicky AlterNet article by David Morris about a Trump presidency and the Court is a case in point. The article ignores contemporary Court decisions many would consider positive, such as gay marriage. Nor does it address whether the Court rates high on any list of issues that might persuade undecided voters to go one way or another.

The reality is that the evolution of the issues that come before the Court, the shifting viewpoints of justices, death, “early” retirements, the changing verdict of history and other variables makes divining the impact of the process of presidential appointment and congressional confirmation at any given moment a jumble.

That said, David Morris and I seem to agree on one point. The Court makes a lot of bad decisions. His article zooms in on a long list of recent cases.

Let’s zoom out. Over the arc of our national history, the Supreme Court has made way more bad decisions than good, regardless of who appointed them. For example, every single justice appointed by liberal icon Franklin Roosevelt voted that Japanese internment was constitutional.

Many Supreme Court decisions, such as the Dred Scott verdict codifying the second-class status of African Americans, or the Court’s role in installing the election-losing Cheney/Bush/Rove administration have been especially atrocious. (Since a heavily armed citizenry didn’t prevent or reverse the Supreme Court Cheney/Bush/Rove coup d’état, one of the most bogus arguments in favor of the Second Amendment is also demolished. But that’s a whole other conversation.)

Again, the fact that 226 years of decisions have consistently upheld white male property-owning power should come as no surprise. But even the “good” verdicts illustrate another question. How much muscle does the court really have to create true and lasting justice?

Just as one “good” war, WWII, has been used ever since to justify an unbroken series of bad wars — two “good” Supreme Court decisions are routinely used to mythologize the potential positive power of the Court. In 1954, Brown v. Board of Education ruled that school segregation was illegal. In 1973, Roe v. Wade ruled that abortion was legal.

Here’s the problem. It’s 2016. Schools are as segregated today as they ever have been. Legal abortions are as difficult to get today as ever. Maybe even more so.

Don’t get me wrong. I genuinely appreciate the perspective and intellect that Notorious RBG and Sonya Sotomayor bring to the national conversation. And precisely because the system is so rigged, I realize that the ACLU, the National Lawyers Guild, the National Conference of Black Lawyers, the attorneys who represent unions and other people’s lawyers are indispensable assets to our struggle.

Further, I too am profoundly concerned over the 2016 presidential election. The prospect of Donald Trump acquiring nuclear weapons is a threat to all life, not only American life. That’s not just because he might be the first president since Truman to use one. It’s because his election will frighten and embolden others with their finger on that button, from Israel to North Korea to Pakistan to who knows who.

Many other dangers from a possible Trump presidency are disturbing as well. But appointing Supreme Court Justices is not so high on my list. Let’s stop kidding ourselves. The white male power legal system isn’t really on our side to begin with.