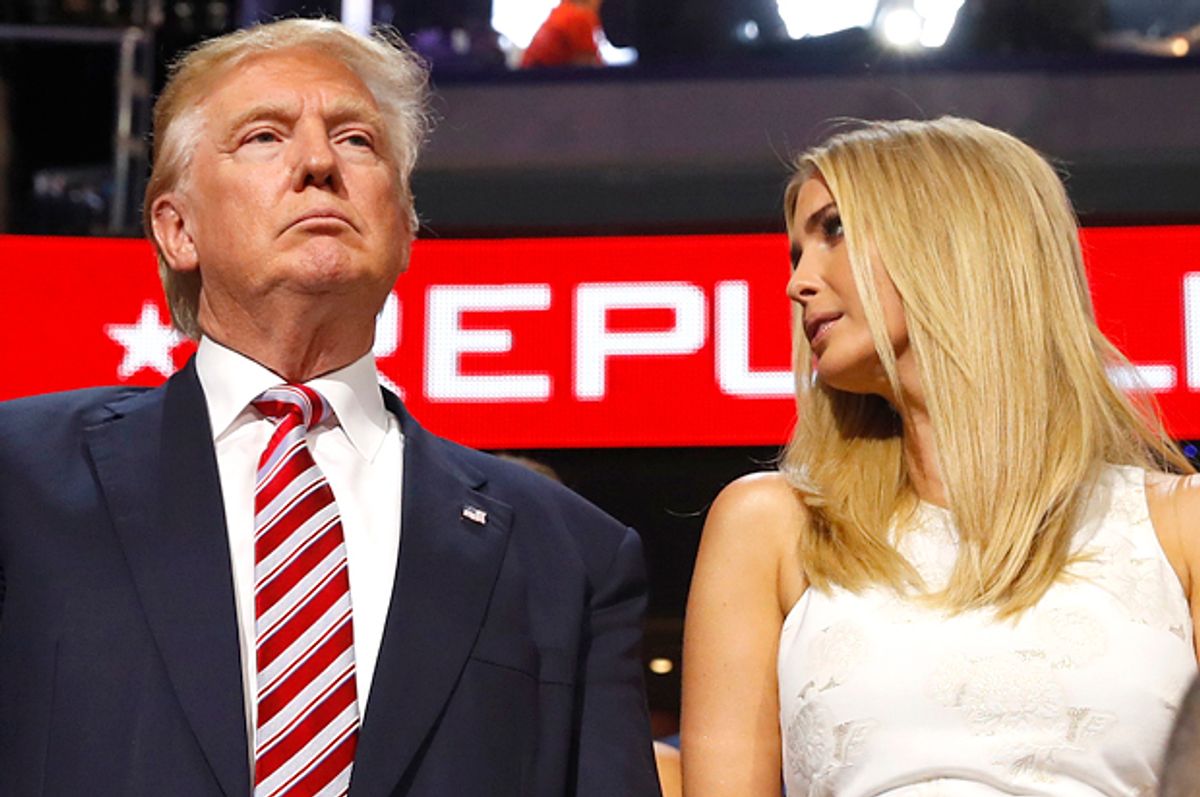 By now, you've figured out that Donald Trump and his cronies are so wrong so often it's nearly impossible to keep up. Over the span of a single day, the reality star's presidential campaign spews out so much in the way of lies and misinformation, it feels like a game of whack-a-mole just to keep an eye on a single aspect of the circus. But cast your attention for a few moments, if you will, to the Trump team's take this week on sexual harassment. Because not only is it yet another shining example of Trump's ignorance, it's emblematic of the wider problem in the way we talk about this issue in general.

In late July, after explosive allegations of sustained sexual harassment against Fox News chairman and co-founder Roger Ailes rocked the network, Ailes stepped down — with a generous golden parachute to cushion his fall from grace. Ailes' accusers included longtime Fox hosts Gretchen Carlson and Megyn Kelly, highly visible and powerful women in the world of conservative punditry. Yet from the moment the story broke, questions about their credibility and skepticism of their accounts arose. In July, Fox's Kimberly Guilfoyle defended Ailes, saying, "This is a man who champions women…. I am a strong woman. I come from a background as a prosecutor. I’ve tried everything from homicides to gang cases to sexual assault cases to child abuse cases. If I see, hear, or experience anything that I feel is inappropriate you bet I’m going to speak up."

That, right there, is the classic retort in any conversation about sexual harassment — it doesn't happen to strong women. And if it does, well, they certainly don't stand for it.

The Trump team has been eager to seize upon that very convenient rhetoric around the topic. Last week, Donald Trump told NBC's Chuck Todd that "Some of the women that are complaining, I know how much he's helped them… And when they write books…. and say wonderful things about him…. All of a sudden, they're saying these horrible things about him." Sad!

Then, in a piece published Monday in USA Today, writer Kirsten Powers said that she asked Trump, "What if someone had treated Ivanka in the way Ailes allegedly behaved?" Trump, in his Trumpian way, simply shrugged it off. "I would like to think she would find another career or find another company if that was the case," he replied.

But as Powers countered in her story, "Most women don’t have the financial resources of Ivanka. They can’t afford to quit their job without another in hand, something that is impossible to do when you are under contract and forbidden to speak to competitors. Most importantly, why should a woman be expected to upend her career just because she ended up in the crosshairs of some harasser?"

The advice to "find another job" is great if a woman's entire career is already built on her father's last name, I guess.

Then again, why would a man whose own public track record with women in the professional world includes demeaning them, belittling them, and calling them names ever for a moment pause to think that the male harasser — and not his victim — should be the one to change behavior?

On "CBS This Morning" Tuesday, Trump's son Eric showed himself to be just as clueless as his father. At the end of a truly painful segment in which he defended his father's reprehensible comments about the parents of U.S. Army Capt. Humayun Khan, Charlie Rose asked one more question. "With respect to the Roger Ailes question and with respect to Ivanka and what he would advise her," Rose asked, "does your father stick by what he said, or does he think that perhaps a better answer ought to be to the attention of human resources, and other things we can do with respect to sexual harassment in the workplace?"

The younger Trump replied, "There is no question that obviously it should be addressed, and it should be addressed strongly. Hey, listen, we all run a company. My father runs a company. That is an absolute no-go anywhere, and that is very much the case." Then, in typical Trump family fashion, he went off the rails. "I think what you're saying is that Ivanka is a strong, powerful woman," he added. "She wouldn't be allow herself to be, you know, objected, you know, to it [sic]… And by the way, you should certainly take it up with human resources / I think she definitely would as a strong person. At the same time, I don't think she would allow herself to be subjected to that. And I think that's a point that he was making and he did so well."

First of all, guess what? Strong, powerful women get sexually harassed, too. Strong, powerful women take so much crap you would not believe it, Trump and Trump the Sequel. This past April, Brittany L. Stalsburg wrote a powerful piece for Huffington Post explaining her own experience of harassment, noting, "A recent study showed that 1 in 3 women ages 18-34 have been sexually harassed at work. And like me, very few women report instances of harassment, citing fear of retaliation as the reason for staying silent." Harassment is not something that happens because a person isn't strong. It happens because some creep wants to exert power.

Second, if the "What if it were Ivanka?" question is so important, why not ask Ivanka herself? Ask if she's ever experienced harassment, ask how she handled it, ask how she, as a business person, deals with it in her own life. But no, because as is so often the case, there's a pervasive notion that the only way to get men to care about issues that affect women is to ask them how they'd feel if it were their woman, their girl. And gentlemen, it's awesome when you get your consciousness raised, but I also swear to God that if it takes having a daughter to make you suddenly wake up and realize sexism is real, don't expect me to congratulate you. The idea that institutionalized misogyny is something that men can only give a crap about if it directly affects their family, and the fact that reporters have to keep asking questions about women's issues to men and in these terms, is just so goddamn depressing.

Donald Trump allegedly runs his own companies. He has employees. Why are people asking him about sexual harassment as it pertains to his child? And if the Trumps believe a member of their own family could choose not to "subject" herself to harassment, how likely do you think it is they'd understand what happens to anybody else?