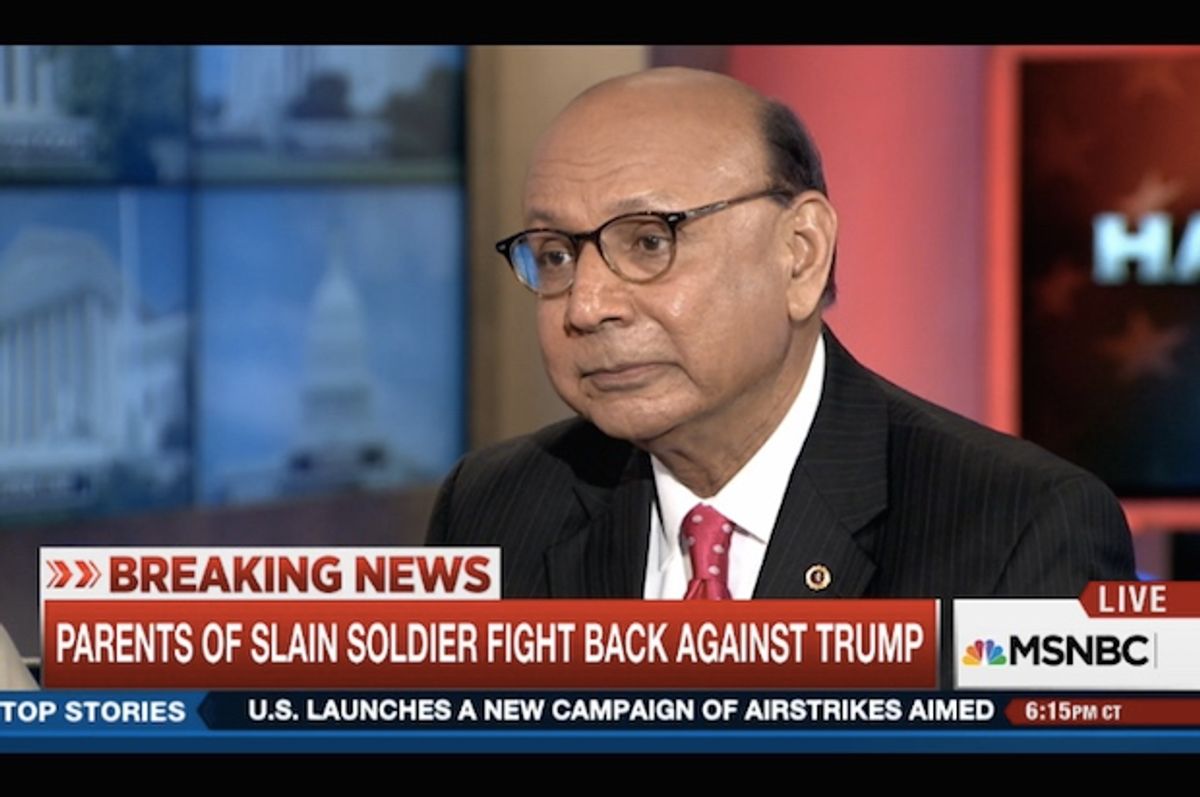 Khizr Khan, the Pakistani American father of a U.S. soldier who died in Iraq, has become something of a media celebrity in the past week.

Trump responded by maliciously attacking the Khans, and a political scandal has ensued.

Many media outlets have amplified Khizr Khan's patriotic sentiments. Significantly less attention, however, has been paid to Khan's criticism of U.S. wars and his lamentation that "We have created a chaos" and a "quagmire" in Muslim-majority countries.

"What do you think, or feel, when you see us attack Iraq, or go into Afghanistan after Osama bin Laden? Or we go attack, we bombed Libya. We're bombing Syria now, all Islamic countries," he said. "What do you feel, as an Islamic man?"

"As a Muslim American I feel that these policies are not in the interest of the United States of America," Khan replied, with a look of distress.

"And we see the result of it," he continued. "We are more vulnerable now. We have created a chaos."

"Well you know, you're speaking to the choir," Matthews laughed.

Khan added, "I wish this country would have listened to Chris Matthews when he was talking, when he was preaching. We could have saved ourselves from this quagmire."

"I didn't think Iraq made any sense, and I think you agree," the host responded.

Matthews then segued back to Donald Trump, to whom they devoted much more time.

In total, they only discussed U.S. foreign policy for 50 seconds in the 15-minute "Hardball" interview.

This brief excerpt, in which Khizr Khan criticizes militaristic U.S. foreign policy, is not included in the isolated clips for the episode on MSNBC's website. One has to watch the full episode to see it.

Khan's criticisms came on the same day that the U.S. launched a new bombing campaign in Libya. In fact, while Khan was stirring up patriotic sentiment on air, MSNBC's breaking news lower third below him reported: "U.S. launches a new campaign of airstrikes."

This new war comes just five years after the previous NATO war plunged the oil-rich North African nation into chaos, empowering extremist groups and allowing ISIS to consolidate its largest regime outside of Iraq and Syria.

As he noted, Chris Matthews was indeed critical in the lead-up to the illegal U.S. invasion of Iraq in 2003. He was also somewhat skeptical of the 2011 war in Libya and the Obama administration's attempt in 2013 to launch a bombing campaign in Syria.

"The president deserves everything he's doing tonight in terms of his leadership," Matthews exclaimed. "He won the war. He was an effective commander. Everybody recognizes that, I believe, except a few critics."

Moreover, in 2014, as the U.S. launched new wars against ISIS in Iraq and Syria, Matthews declared, “When it comes down to how we fight this, everybody seems to be for air attacks, airstrikes. Everybody is for drone attacks.”

Likewise, Democratic presidential candidate Hillary Clinton, who has also applauded Khan and used his story to attack Trump, is one of the most hawkish figures in U.S. politics.

Clinton voted and lobbied for the invasion of Iraq, helped lead the catastrophic 2011 war in Libya and pushed for a much more aggressive policy in Syria, contributing greatly to the "chaos" and "quagmire" Khan railed against.

Salon contacted the Clinton campaign with a request for comment, but did not immediately receive a response.