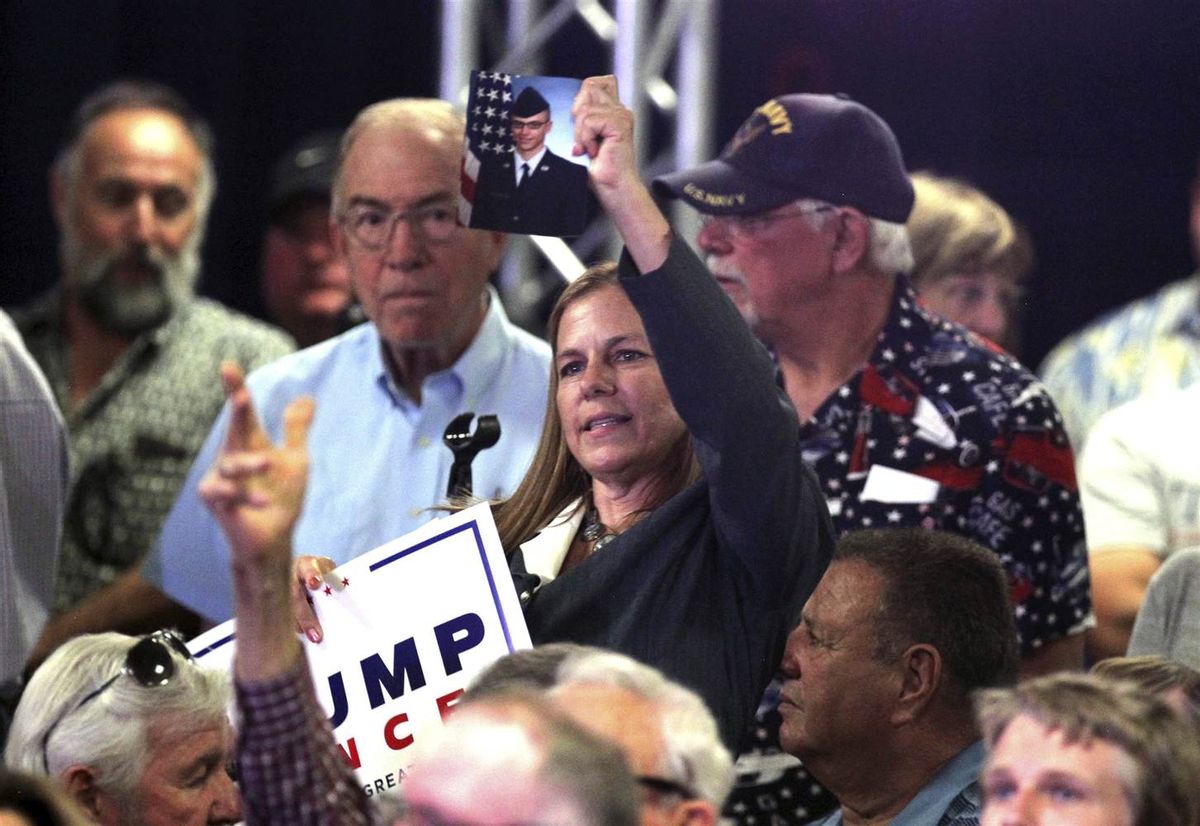 A crowd of Donald Trump supporters heckled the mother of an active duty military sergeant after she dared to ask his running mate about his continued attacks on Khzir and Ghazala Khan, Gold Star parents who have criticized Trump for his anti-Muslim rhetoric and proposals.

At first, Carson City resident Catherine Byrne, who identified herself as the mother of a U.S. Air Force staff sergeant, was greeted with a chorus of cheers on Monday at a Mike Pence rally at the Carson Nugget hotel and casino in Nevada.

“Time and time again, Trump has disrespected our nation’s armed forces and veterans, and his disrespect for Mr. Khan and his family is just an example of that,” Byrne began, prompting boos from the crowd.

“Why are you here?” one woman shouted as the boos started to rain down.

“Will there ever be a point in time where you’re able to look at Trump in the eye and tell him enough is enough?” Byrne continued over the booing.

“You’ve got a son in the military, how do you tolerate this disrespect?” she quizzed Pence.

Pence’s son, Michael, is a second lieutenant in the U.S. Marine Corps.

At that point, the boos became so deafening that Byrne rushed to raise a picture of her son up for the crowd after a campaign staffer snatched the microphone from her.

"Folks that's what freedom looks like and what freedom sounds like," the Indiana governor said to a smattering of applause, adding that he has never spent time around someone who is "more devoted" to military and to veterans than Trump.

“Captain Khan is an American hero and we honor him and honor his family as we do all Gold Star families,” Pence said, speaking for the top of the ticket who has spent the past four days attacking the Muslim American family.

Barbara Weisenthal, 56, told Politico that she booed the veteran's mother during her question because she believed it was “probably not the best place to do that.”

Weisenthal said she also thought Khizr Khan did not have the “right” to say what he did about Trump at the convention. His speech “was almost like slander,” she said.

“She was claiming that Trump was somehow insulting the veterans,” Trump supporter Roen Horn, 29, told Politico, calling Byrne's question “a bunch of crap.”

“She was politicizing the veterans,” he said. “She had an agenda.”

During an interview with MNBC's Lawrence O'Donnell, Byrne explained that her son, 27, has served since high school — having previously deployed to Iraq in 2009 and 2010, before re-enlisting. He is now on his second deployment on a base in the United Arab Emirates.

Byrnes told O'Donnell that she "felt disrespected," by the crowd's overwhelming reaction to her. "And that was what my question was — disrespect toward the military. The crowd as a group booed me."

“I felt like everybody behind me — the whole room — they talked over me. All of a sudden, everybody booed,” Byrne said, adding that she later received thanks from some Trump supporters.

"I knew that it was going to take bravery to mention Mr. Khan's name in that audience, I was ready and I was there for a while, but it was my opportunity to ask the candidates candid questions that are important to me," she explained.

"The most painful thing that could happen is losing a child, and offending someone who has gone through that is the lowest of the lows":