Apple is coming for our gun emoji: The new "water pistol" isn't an equal swap

The company takes a stand in the wake of gun violence, but knows nothing about metaphors 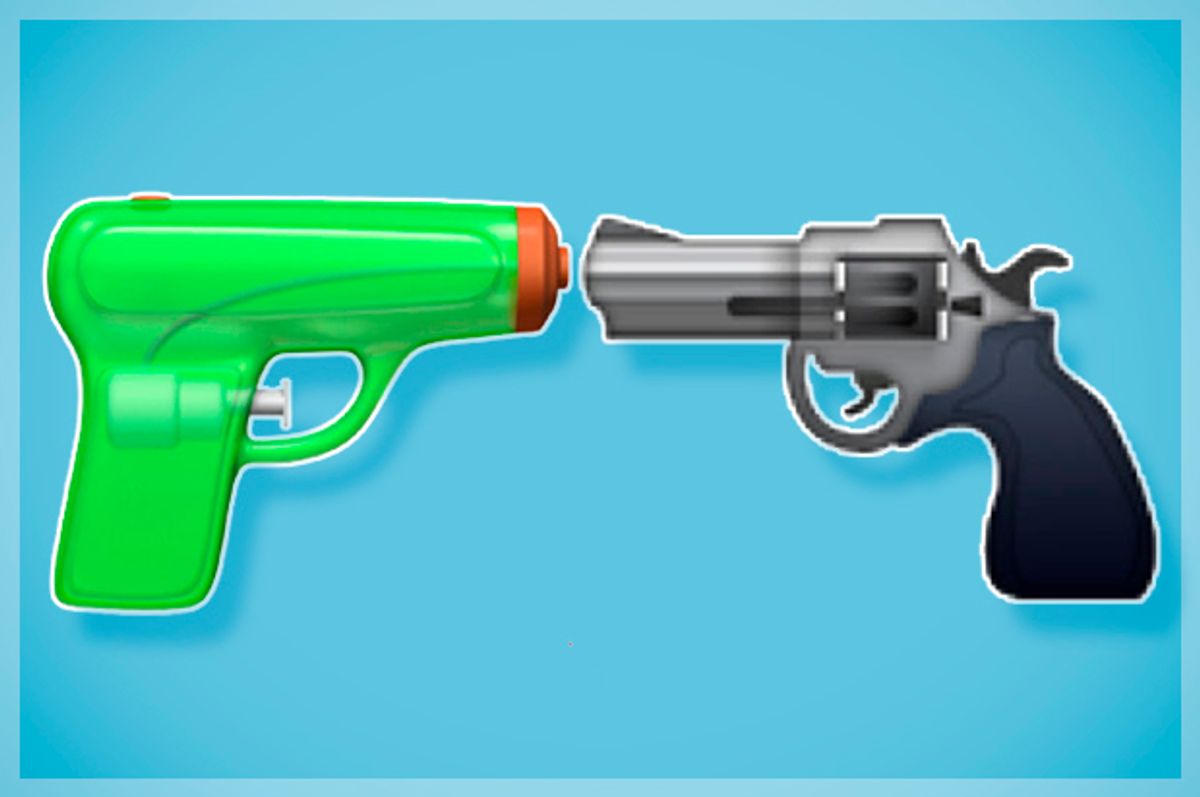 Earlier this week, Apple enthusiastically announced -- and unveiled -- some long-awaited updates to its slate of emojis, a collection that will better reflect and celebrate the diversity of its users. Good one, Apple. But as a peaceful liberal who like any sane person supports reasonable measures on deadly weapons, I need to ask, what in the hell have you done to my gun?

More than one hundred new emojis will be available to iPhone and iPad users when the iOS 10 rolls out this fall. They will feature a rainbow flag, different family configurations, and a broader racial and spectrum of character possibilities. It will also replace the gun emoji with a green water pistol. ¯\_(ツ)_/¯ right?

Apple has not always been the greatest at remembering that not everybody looks or thinks like a bunch of white dudes from Cupertino. Let's start with the fact that the unfortunately menstrual name "iPad" clearly wasn't workshopped by a group of women. Or how about those staircases in the Apple stores, that don't seem to take into account that some patrons wear skirts? The company has in the past taken the confusing stance that the words for female genitalia are offensive, but not male genitalia. But it has endeavored to evolve. Last year, the company at long last offered users five different skin tones for its emoji characters, added more racially-diverse images and included same-sex families.

Now, in its newest update, there is more variety, including female athletes, single parents… and that water pistol. Earlier this year, the company nixed adding a proposed rifle emoji. And since last year, a movement has been calling on Apple to #DisarmTheiPhone and recognize that "many Americans unknowingly carry a gun with them every day. The one that was given to them without a background check: the gun emoji."

Apple appears to have heard, as it readies to swap out the more realistic looking gun image for the green and orange water pistol. Writing in The Guardian Wednesday, writer Jean Hannah Edelstein praised the change, saying, "Changing the emoji isn’t a sign that political correctness has gone awry. It’s a smart, small part in the battle – which we’re presently losing – to keep Americans safe."

Yes, the image can have threatening connotations, and that can be abused and misinterpreted. As CNN reported Tuesday, "The pistol and other weapon emojis have landed people in trouble with the law. A 12-year-old in Virginia was charged after allegedly threatening her school in an Instagram post that used a gun, knife and bomb emoji. A teen in Brooklyn was arrested for posting a police emoji with pistol emojis pointing at his head. The charges were later dropped."And in southern France this March, a 22-year old man was sentenced to three months in jail for texting his girlfriend an emoji of a pistol.

But to suggest that we have all somehow been "unknowingly carrying a gun" because we have a cartoon picture of one on our phones is a profound insult to the intelligence of every iPhone user. I care deeply about issues surrounding gun control. I support strong background checks and smart limits on assault weapons. I also know that when I see an emoji, to paraphrase René Magritte, this is not a gun. When I use the gun emoji in a message, it's to communicate a particular and specific feeling. That feeling is not, hey, water fight. It's anger or exasperation or putting an end to something — a project, an idea. When I use the bomb or the dagger or the syringe emojis, I am likewise not in the market for a beach ball image. It's what we fancy writer people call a metaphor. Nobody ever died from one. And you will pry my gun emoji from my cold, dead, yellow hand.