Breaking down Trump's infrastructure policy: It's a good idea nestled in a ruinous economic agenda

Donald Trump wants to borrow over $550 billion for infrastructure, mainly because it's more than what Hillary wants 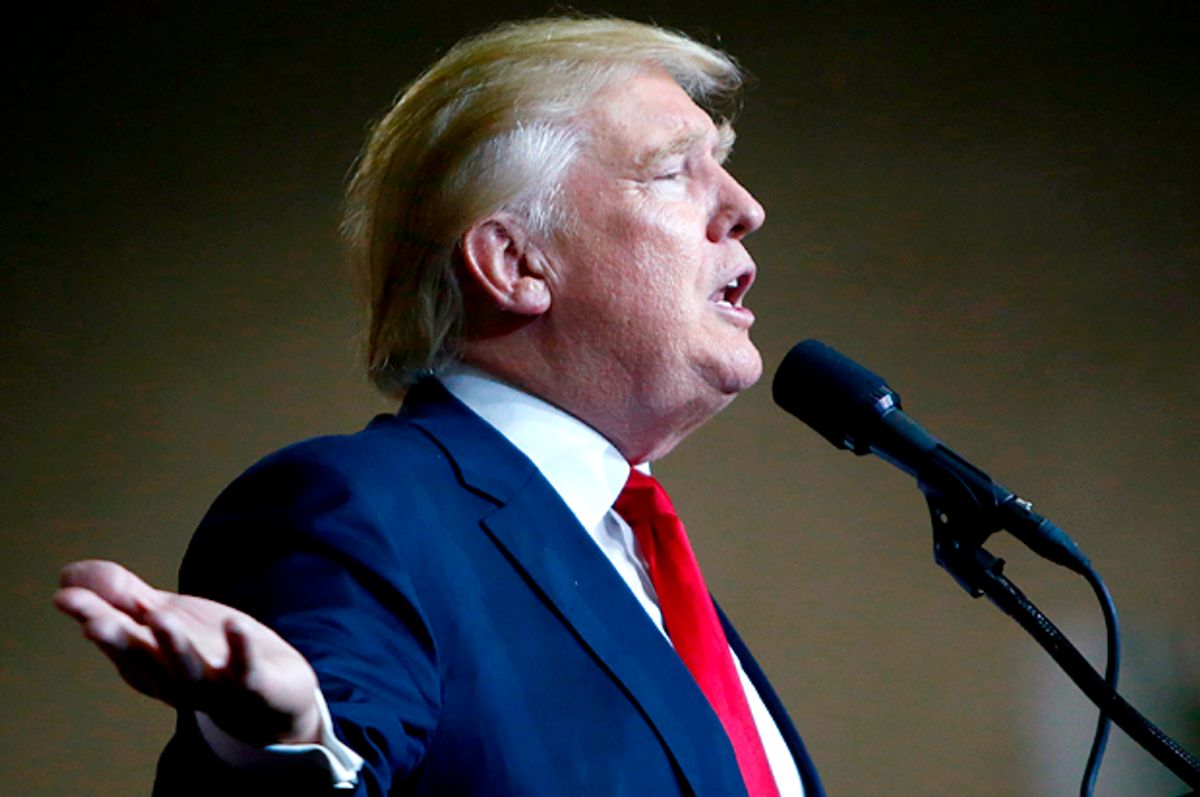 It tends to get lost amid his flurry of insults aimed at veterans, snipes at GOP officials, suggestions of widespread electoral fraud, and ejections of infants from campaign rallies, but Republican presidential nominee Donald Trump does actually take some time out of his busy gaffe schedule to talk about policy. Often what he says is incoherent and subject to change at any moment, but Trump is still the presidential candidate for a major political party, which obligates us to give his ideas serious consideration and assess how they fit into the broader policy framework.

This week on Fox Business Network, Trump laid out his plan for rebuilding the nation’s infrastructure. Calling Hillary Clinton’s proposed $275 billion on infrastructure spending “a fraction” of what is needed, Trump proposed spending “at least double” that – so $550 billion, minimum – on infrastructure, and he proposed paying for it by creating “a fund” in which investors would buy government bonds. So basically he’s talking about borrowing money to pay for at least a half-trillion dollars in infrastructure improvements.

That sound you just heard was every elected Republican official and national debt scold clenching their sphincters in unison. In 2009, when the economy was on the brink of collapse, congressional Republicans balked en masse at borrowing several hundred billion dollars for economic stimulus (including infrastructure repair), so they’re not going to be especially amenable to Trump’s idea. The politics of the thing also aren’t going to make Republicans very happy: it’s tough to attack Hillary as a “tax-and-spend liberal” when your own candidate has taken one of her proposed spending guidelines and said “double it.”

What’s interesting about all this is that in isolation, Trump’s proposal (vague as it may be) is actually a pretty good policy. “I think it’s a smart idea,” says Lawrence Mishel, president of the left-leaning Economic Policy Institute (EPI). “The fact that you can distinguish [Trump’s infrastructure proposals] from those of the mainstream Republicans only suggests how off-target and ideological are the [Paul] Ryan-type Republicans.” Infrastructure projects, generally speaking, are a strong investment and borrowing money to pay for them makes a lot of sense. An EPI analysis from 2014 estimated that “a debt-financed $250 billion annual investment [in infrastructure projects] boosts GDP by $400 billion and overall employment by 3 million net new jobs by the end of the first year.” Good things, right?

The problem, of course, is that Trump’s infrastructure proposal doesn’t exist in a vacuum. It’s part of a broader fiscal policy platform that Trump has laid out – a platform that was massively at war with itself before Trump proposed an additional several hundred billion dollars in debt-financed infrastructure spending.

The centerpiece of the Trump economic plan is a series of tax cuts that would deprive the government of roughly $10 trillion in revenue, with the vast majority of those funds being funneled straight into the pockets of the wealthy. That’s irresponsible enough on its own, but Trump has also promised to eliminate the existing $19 trillion in national debt in just eight years – a task that would generously be described as “impossible” – while also cutting taxes. On top of that, he’s also promised to not make cuts to two of the biggest items in the federal budget – Social Security and Medicare – while increasing spending on the military.

To assert that this all somehow adds up is to scoff at the very concept of mathematics. If Donald Trump were to defeat the prevailing conventional wisdom and win the presidency, basic math dictates that something in his plan would have to give. And when you look at the policy preferences of Trump’s party, it seems pretty clear that the first item on the block would be the debt-financed infrastructure spending proposal.

That all assumes, however, that Trump is actually giving any serious thought or consideration to any of this. Aside from the tax-cut bonanza, his primary motivation when crafting economic policy seems to be to deprive Hillary Clinton of attack lines. He’s not going to cut Social Security, he’s going to leave Medicare alone, and now he’s going to double Hillary’s infrastructure proposals – that doesn't leave the Clinton campaign a lot of room to attack him as a heartless spendthrift. He’s compiling a wish-list economic policy that has no trade-offs, and he’s trusting that voters won’t realize (or won’t care) that he’s describing an insane and potentially ruinous policy agenda.

And, of course, nothing Trump proposes can be considered the final word on anything. It’s entirely likely that in a week’s time he’ll sit in front of a TV camera and deny up and down that he proposed spending a single red cent of borrowed money on infrastructure.