Clinton, Gen. Allen and alarmist declarations: The media must call out leaders for their dangerous fictions 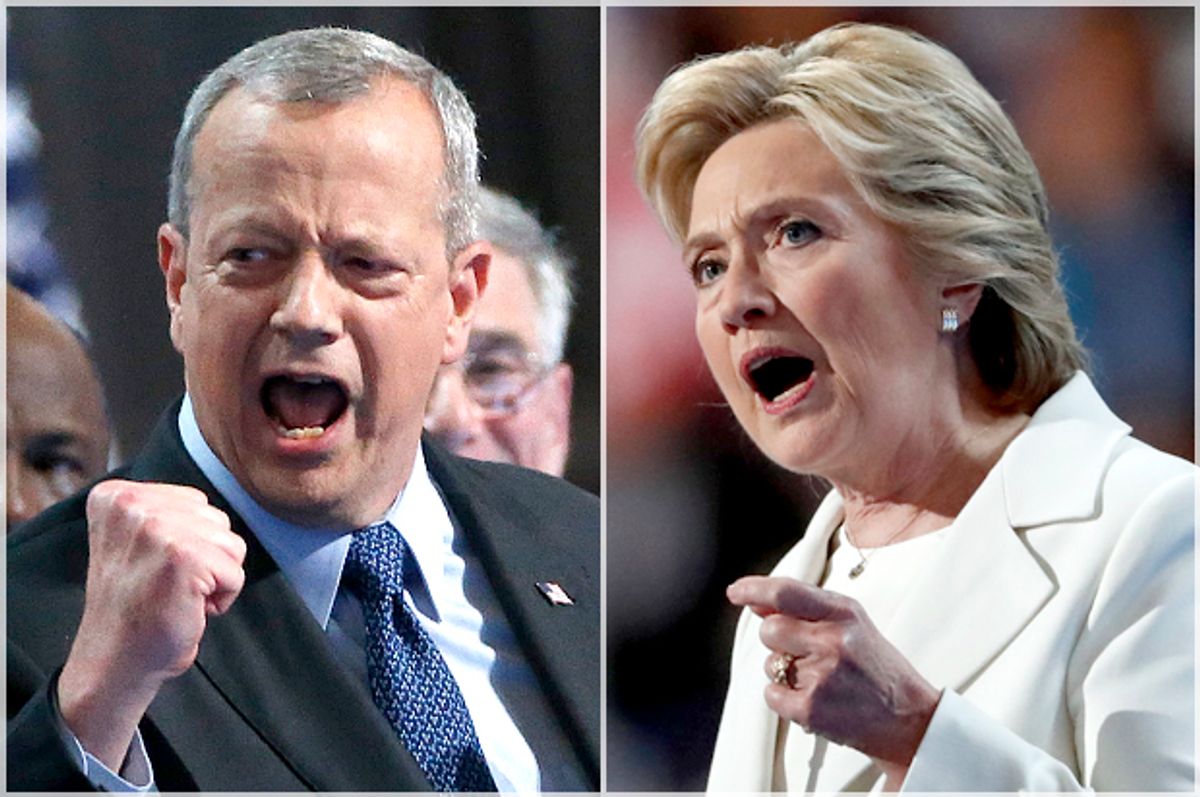 A couple of remarkable things got said on television last Sunday morning. Both seemed to have slipped into the record without much comment. Let us keep the record straight, then — the never-ending task when you have a corporatized press dedicated to dishonesty.

John Allen, a retired Marine general, addressing the prospect of a Trump presidency on ABC's "This Week": “What we need to do is ensure that we don’t create an environment that puts us on a track conceivably where the United States military finds itself in a civil-military crisis with a commander-in-chief who would have us do illegal things. That’s a major issue that we’re facing here, the potential for a civil-military crisis where the military could be ordered to conduct illegal activities.”

Hillary Clinton on Fox News, remarking on the Democratic National Committee’s email mess: “We know that Russian intelligence services hacked into the DNC and we know that they arranged for a lot of those emails to be released, and we know that Donald Trump has shown a very troubling willingness to back up Putin, to support Putin.”

I could hardly wait for Monday’s papers to see how they would play these assertions. Nothing in any of them. The old rule applies once more: When people say remarkable things that are remarkable in the wrong way, they do not get remarked upon.

My remarks, one at a time:

Allen, as readers know, was among the military brass who breathed Clintonian fire at the Democratic convention. His comments on ABC were advanced as mere elaboration of anti-Trump animosity within the officer class (but not the rank-and-file). We have known for some time that Clinton is the Pentagon’s preferred candidate — for good reason, this — so there should be no cause for the American body politic to ripple with surprise. And it has not.

Straight off the top, we have the spectacle of the American military assuming an active role in American politics. This is more than questionable: It is a grave step in the wrong direction. I wonder which is worse — if the army were to barge in, banana republic-style, or if a major political party welcomes it, as the Democrats just did.

If you think this is a hair-split, consider Allen’s comments on ABC and think again. “A civilian-military crisis” was his phrase, and he used it twice. In evident pursuit of absolute clarity, the general tacked on a truly chilling descriptive, “… a civilian-military crisis the likes of which we’ve not seen in this country before.”

And you thought Trump is the one who harbors an extra-constitutional authoritarian streak.

What is this man telling us? Maybe there is more than one way to interpret the general’s threat—and however one takes this a threat is what he leveled. In my read, a military officer just told us that a coup could ensue should the voting public deliver to the White House a candidate the Pentagon does not like.

A silent coup, a gentlemanly, unseen coup, Allen assured George Stephanopoulos, assuming this is what he meant: “My hope would be that the conversation would occur quietly in the Oval Office, or somewhere else, to advise him not to continue along this track.”

Lest this column come over as alarmist, I will add that we are in all likelihood many miles from any such eventuality as an outright coup. But words are actions, as the late Pierre Bourdieu argued persuasively in “Language and Symbolic Power.” And nowhere is this truer, he added, than in politics. However far we may be from a military rebellion against an elected official — and however far from Allen’s mind — he has now put the thought of one on the table. As these things go, we have just been advised that this is now a legitimate part of the conversation. Think of it this way: A Marine general has an American columnist writing about whether a military officer just threatened a coup. There is nothing good in this.

One, Allen skips a modest step — commonly called democratic process. Were Donald Trump, as commander-in-chief, to order a new campaign of torture — as against all the American army’s previous campaigns of torture — legality would be determined by the other two branches of government. Read and recite your Kipling, general: Yours is to do or die, nothing more. Your task is operational and never involves political levers. Maybe you, Sir, should read the constitution.

Two, the thought that a Marine general would bridle at illegal conduct of any kind is not laughable — the history of the military’s conduct being too shameful — but it is ridiculous. The Pentagon’s true objection to Trump is that he does not belong to the right clubs. Trump has no ties to the armed services and the defense industry. He does not understand the necessity of confrontational foreign policies to keep the Juggernaut rolling. Clinton has such ties and understands well.

Three, the anti-Trump campaign rises to fever pitch as a struggle for control of American policy does, too. Ashton Carter’s Pentagon is now in more or less open warfare against any effort John Kerry’s State Department may make on behalf of negotiated solutions to questions such as Syria, Ukraine and maritime jurisdiction in the South China Sea. There is a long history here, and it is essential to recognize it as backdrop. I have outlined the Carter-Kerry conflict in previous columns and will revisit it in columns to come.

Finally, there is a difference between alarmist thinking (never useful) and alarm (most certainly justified as of last Sunday). Anyone familiar with, say, Japanese or German history knows that the kind of outcome Allen boldly warns of is the consequence of a thousand steps of an inch apiece, none taken note of. Anyone who thinks America is immune from this historical pattern dwells thoroughly within our exceptionalist universe.

Hillary Clinton knows what about who hacked the DNC’s email and with what intent? “We” know what about these things?

She and we know bananas — nothing. We are still in the land of so-and-so’s “highest confidence,” so-and-so “believes,” and other such useless expressions. No one is going to put his or her name on the Russians-did-it thesis — and for good reason. And now comes Clinton, who cannot manage even to wait until she is president to begin misleading the American public.

Clinton’s Fox News interview was her first after the Philadelphia convention. (And there she goes again, lunging after the right.) Her unqualified accusation of Russian intelligence services makes it stay clear on this question, no matter one’s political stripe. The best way to do so is to remain attentive to verbs. Having the highest confidence commits no one to anything. Take it apart: It is another way of saying someone is not certain.

Two new developments must be entered into the record on the D.N.C.’s email mess. In brief:

Three days before Clinton told us what we know, Reuters quoted three “U.S. intelligence officials” who identified several signs that the digital footprints on the D.N.C. hack — Cyrillic characters and other giveaways — were left purposely with the intent of creating a trail leading to Russia. “Either these guys were incredibly sloppy, in which case it’s not clear that they could have gotten as far as they did without being detected,” one of the officials said, “or they wanted us to know they were Russian.”

The Reuters piece was written by three top-drawer investigative reporters in the Washington bureau. One, Mark Hosenball (whom I knew in our high school years, incidentally), has a long, fine record of speaking truth to power.

A reader in Switzerland sent in the record of another theory, this one advanced by none other than Israeli military intelligence. On their web site, the Israeli army’s spooks blew four holes in the Russians-did-it thesis.

The two widest of these holes, here verbatim are (1) “Had any branch of Russian intelligence been responsible, … no obvious signatures, such as the terms 'Fancy Bear' and 'Cozy Bear,' … would have been left behind for investigators to find,” and (2) "CrowdStrike’s claim to have cracked the case in two hours is hardly credible. Getting to the bottom of an APT (Advanced Persistent Threat) calls for extra-powerful computers, working in conjunction with the internet service provider and consuming weeks, if not months of analysis."

Interesting, but we still know nothing — which is precisely the point.

I take that back: We know a couple of things.

We know Clinton’s assertions last Sunday amount to a 72-point News Gothic lie. The pattern common to our leaders and our media is a regression. It unfolds before us as we speak: Unsubstantiated assertion devolves to a probability, then a belief, then comes out the far end as a fact, and then we commence to live by it as if it were true.

Vigilance. This we now know is essential if we are to find our way out of political dysfunction. General Allen has just reminded us of this in his way, and so has Hillary Clinton in hers.