Disputing Bratton's record: Mass stop-and-frisk is over but "broken windows" endures in NYC

Arrests are down in the city, but the number of NYers caught up in the system due to "broken windows" is enormous 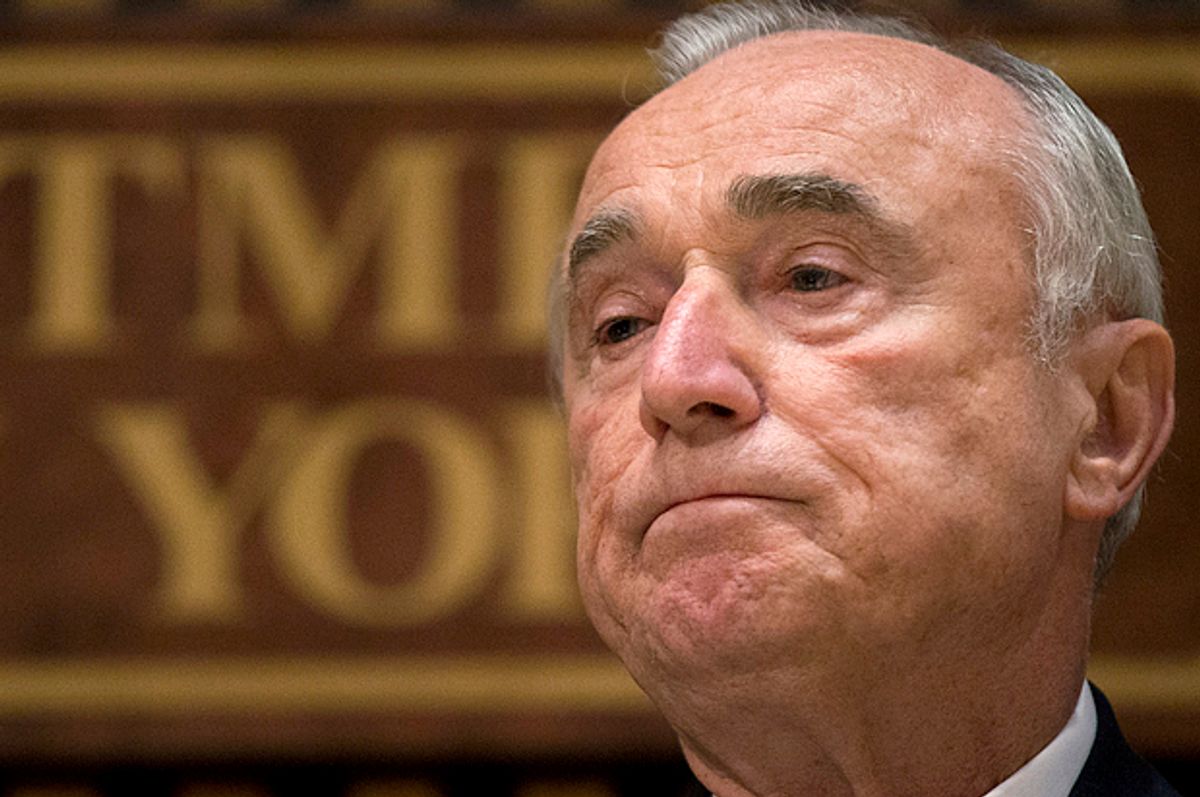 As NYPD Commissioner Bill Bratton makes a sudden exit, a heated debate over his legacy continues. Bratton has been criticized for abuses committed by the nation’s largest police department — a department which, thanks to flush funding he secured, has dramatically grown under his watch. But Bratton has also presided over the termination of the NYPD’s most controversial enforcement measure, dragnet stop-and-frisk, which former Mayor Michael Bloomberg had hailed as indispensable to fighting crime. Bratton has proven doom-and-gloom naysayers wrong by dramatically reducing stops while presiding over historically low crime rates.

“Nothing’s perfect but this really shows that police departments can do what the public is demanding right now, which is to hugely reduce the way they’re using enforcement, especially in minority communities, and also produce more safety,” says David Kennedy, director of John Jay College of Criminal Justice’s National Network for Safe Communities. “That’s what people want.”

It’s not just that, according to city data. The number of people from New York City in jail and state prison has plummeted, as have marijuana arrests and criminal summonses (though pot arrests rose sharply at the beginning of this year).

Bratton, however, had protesters calling for his resignation until the very end thanks to his continued and fervent embrace of broken-windows policing, which targets small-scale quality of life offenses. Like stop-and-frisk, broken windows is sold as a measure that decreases more serious crime.

“We are glad that Bratton is leaving,” says Lumumba Akinwole-Bandele, a member of Communities United for Police Reform. “Absolutely. We never wanted him in the first place.” Mayor Bill de Blasio “ran his campaign primarily on stop and frisk and racially discriminatory policing—and then to hire Bratton was a huge slap in the face.”

The anger over Bratton’s appointment exploded in July 2014, when he and de Blasio were confronted with widespread demonstrations after Officer Daniel Pantaleo placed Eric Garner, suspected of selling loose cigarettes on Staten Island, into a fatal chokehold.

Bratton deserves credit for ending mass stop and frisk, says Brooklyn College sociologist Alex Vitale, and for reducing enforcement of some other low level offenses—like issuing summonses instead of making arrests for requesting MTA card swipes. But “on the other side of the ledger,” he says, there has been “no real accountability for officers involved either in excessive use of force or corruption and misconduct.”

“Broken windows policing,” Vitale continues, “is going full tilt and has even been enhanced in some areas like going after homeless folks…broken windows policing is alive and well in New York, and it’s going to continue as long as the mayor believes in it. And he’s made it clear that he does.”

The number of New Yorkers caught up in the system due to broken windows policing, before and during Bratton, is enormous: NYPD issued 1,839,414 “quality-of-life” summonses between 2010 and 2015 for offenses ranging from public urination to drinking in public. Incoming Commissioner James P. O’Neill (who Bratton seemingly named on his own with no public input) will face continued resistance on broken windows—especially given that, according to a recent report from the NYPD’s inspector general, there is “no evidence” that such enforcement has any effect in decreasing crime.

“Issuing summonses and making misdemeanor arrests are not cost free. The cost is paid in police time, in an increase in the number of people brought into the criminal justice system and, at times, in a fraying of the relationship between the police and the communities they serve,” the report stated. “Given the costs of summons and misdemeanor arrest activity, the lack of a demonstrable direct link suggests that NYPD needs to carefully evaluate how quality-of-life summonses and misdemeanor arrests fit into its overall strategy for disorder reduction and crime control.”

The rate of quality-of-life enforcement did decline sharply after Garner’s death. But complaints continue to span the city. In East Harlem, homeless people complain that the NYPD is engaged in a crackdown that seems aimed at making their life in the neighborhood impossible. In recent years, more than a hundred thousand summonses have still been issued each year for open container. And the Police Reform Organizing Project complains that people of color made up 86.5% of misdemeanor arrests for the first three months of the year.

“The retirement of Commissioner Bratton is an opportunity to implement new policies that foster accountability and transparency,” said Tina Luongo, attorney-in-charge of the Criminal Practice of the Legal Aid Society, in a statement. “We hope that the Mayor and the new senior management team of NYPD are truly committed to real reform and rebuilding bridges that have long been burned by broken windows discriminatory policing of Black and Brown people.”

After Eric Garner’s death, de Blasio infuriated Patrolmen’s Benevolent Association head Patrick Lynch when he expressed sympathy with protesters. Bratton had union conflicts as well. In response to Bratton’s resignation, the Sergeants Benevolent Association tweeted that “Comm Bratton is finally doing what is right for the NYPD & the ppl of NYC. We wish him well & look forward to a new direction for the NYPD.”

But Bratton and de Blasio have given the city’s police unions little to actually be upset about: The NYPD did little to nothing under his tenure to make an opaque disciplinary system transparent to the public, and serious discipline appears to remain close to non-existent. (De Blasio is widely perceived to be deferential to his police commissioner, who he has leaned on to provide him with political cover against conservative-leaning critics. It hasn’t helped. The mayor’s popularity has tanked across the board.)

The city has fought NYCLU efforts to gain access to administrative findings against officers accused of misconduct, and individual officer’s records remain largely hidden from the public. That’s true throughout New York as a result of state law. But de Blasio has not backed efforts to reform the law and, in a Legal Aid suit seeking access to Officer Pantaleo’s records, has fought to uphold a broad interpretation of it in court.

“There has continued to be a huge problem in terms of lack of discipline and accountability for police officers who engage in misconduct,” says Christopher Dunn, associate legal director of the NYCLU. “The truth of the matter is that very few police officers face any form of meaningful discipline when they have engaged in misconduct against civilians.”

In 2014 and 2015, prosecutions by the Civilian Complaint Review Board resulted in zero officers being fired.

Civilian complaints against police have declined, and the number of substantiated complaints is up. The former could reflect the end of mass stop and frisk, and the latter could mean either that police practices are worsening or that oversight is improving—two very different things. Dunn suspects that more substantiated complaints reflect an increase in misconduct rather than improved enforcement.

Ending mass stop-and-frisk, which at its 2011 high point stopped young black men more times than the number of young black men who lived in New York, was no small thing. There were 685,724 reported stops in 2011 and 22,939 last year. But that program, after years of protest and civil rights litigation, was already on its way out under his predecessor, Raymond Kelly. Candidate de Blasio was railing against stop-and-frisk on the campaign trail even as federal Judge Shira A. Scheindlin had already ruled that stop-and-frisk was an unconstitutional “policy of indirect racial profiling” that systematically stopped “blacks and Hispanics who would not have been stopped if they were white.”

Three years later, Communities United for Police Reform's Akinwole-Bandele is skeptical that reported decrease in stops reflects the reality of policing experienced by people of color on city streets.

“People are still being harassed, their freedom to move about is still being inhibited by law enforcement.”

Some activists, of course, will never be entirely satisfied with the state of the NYPD: one group’s demands include defunding the department. But radical demands have clearly produced results, from the decline in broken windows enforcement following Garner’s death to the end of mass stop-and-frisk. And everyday interactions with police will remain a source of conflict, says Akinwole-Bandele, as long as police are used to address issues often related to poverty and mental health issues.

Just this past Saturday, State Assemblyman Michael Blake, who represents the South Bronx, alleged that a police officer slammed him against a gate as he tried to defuse a conflict between police and residents. If even a state legislator still risks getting roughed up on the street, then the NYPD still has a long way to go to assuage its critics. The run-in echoed a 2011 incident, when City Councilman Jumaane D. Williams and an aide to then-Public Advocate de Blasio were detained after a dispute with officers at the West Indian Day Parade.

“It’s broad daylight, they get thrown to the ground, they both get arrested,” de Blasio said in 2011, before he became a protest candidate and then an embattled mayor. “If that’s what happens to an elected official and a senior appointee, imagine what happens to a general member of the public.”