The case of Purvi Patel: How Mike Pence won his crusade against abortion in Indiana 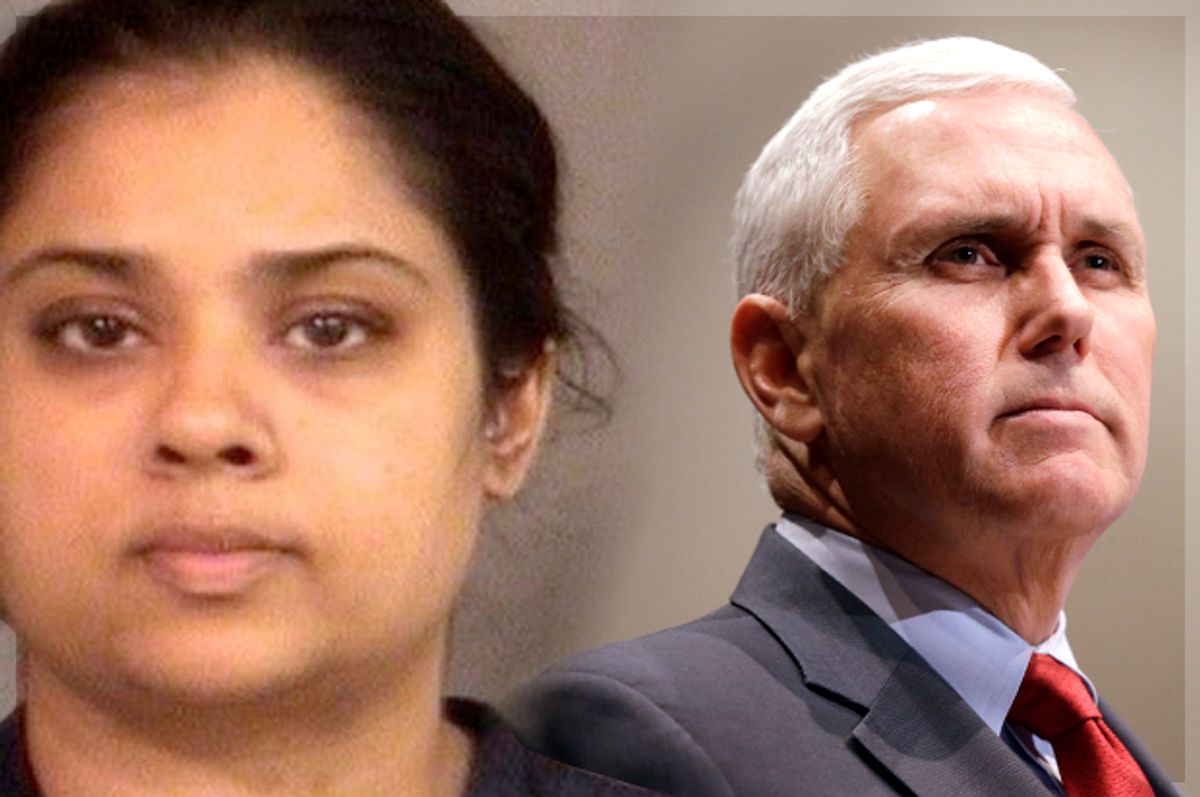 On Jan. 14, 2013 Mike Pence was sworn in as governor of Indiana. In late July of that same year, Purvi Patel went to a hospital in pain, bleeding heavily after a miscarriage.

The doctor who saw her suspected that she had induced a late abortion and called the police. When Patel woke up after sedation, there was a police officer stationed by her bed. The anti-choice doctor left the hospital and joined the police in a search for a fetus. A one-pound fetus was indeed found, by the police, in a Dumpster. Despite hospital tests showing no traces of any abortifacent in her blood work, the state of Indiana charged her with both feticide for allegedly inducing an abortion, and child neglect for allegedly having a premature baby and then allowing the baby to die. On March 30, 2015, Patel, convicted of both crimes, was sentenced to 20 consecutive years in prison. To date, she has served one year and four months of that time.

On Friday, July 22, Judge Terry A. Crone of the Indiana Court of Appeals reduced the child neglect charge against Patel and threw out the feticide charge. In his 42-page ruling, Judge Crone chastised prosecutors for charging Patel under the state’s 2009 feticide law,

In his 42-page ruling, Judge Crone chastised prosecutors for charging Patel under the state’s 2009 feticide law, finding “that the legislature did not intend for the feticide statute to apply to illegal abortions or to be used to prosecute women for their own abortions.” The court agreed with Patel’s appeal attorneys and the doctors who made the case that the state did not prove beyond a reasonable doubt that the fetus could have survived had she done anything differently. A unanimous panel of the Indiana Court of Appeals overturned the feticide conviction. It also reduced her child neglect conviction from a class A felony to class D. Class D convictions carry a maximum sentence of three years.

However, it’s not all good news for Patel. The Court also held that the state’s case did offer sufficient evidence to show Patel knew the infant was born alive. This, despite the fact that Patel’s attorneys challenged the use of the controversial, and historically discredited, “lung float test” that prosecutors used to argue the infant was not stillborn.

This is Mike Pence’s Indiana. This is Donald Trump’s America. One in which women are punished for abortion, for miscarriage, and potentially for any outcome of their pregnancy that doesn’t result in a healthy baby. “Healthy,” in this case, is determined by the politicians who seek to proscribe who can have an abortion, when, and for what reasons.

Though the court’s ruling on the illegitimacy of the feticide conviction and the reduction of charge is significant, and implies that the court did not flout well-established legal principles, it does not amount to justice for Ms. Patel. When the state was unable to offer actual evidence that Ms. Patel neglected a dependent, they leveraged the fact that she sought medication to terminate her pregnancy. They cashed in on well-established abortion stigma and the fact that women of color are not trusted agents of their own reproductive decision-making.

In March of this year, then Pence signed a law prohibiting women from obtaining an abortion because of the race, gender, or disability of the fetus, making Indiana only the second state in the nation to do this. This law would also hold doctors legally liable for wrongful death if it was found they had performed an abortion motivated by one or more of the prohibited reasons. These laws are targeted against women of color and result in mistrust and fear of the medical community. Purvi Patel expressed just this kind of fear and anxiety about going to the doctor, in numerous text exchangeswith her friend, when she learned that she might be pregnant. Mike Pence’s vision for for Indiana is, in fact, already in full effect.

This is Mike Pence’s Indiana. In 2007, as a member of Congress, Pence sponsored the first bill to defund Planned Parenthood.  He reintroduced the legislation multiple times until he left the House to run a campaign for Governor in 2011. As Governor, he has signed nearly every anti-choice bill that made it to his desk.

It is this anti-science and anti-choice climate that has contributed to Purvi Patel’s terrible journey. Patel was working at her parent’s store in Mishawaka, Indiana when she learned she might be pregnant. Instead of feeling safe and supported enough to turn to a medical professional who could talk with her about her options, make sure she understood them, and provider her compassionate reproductive health care, she worried about what would happen if she went to the doctor. She worried what would happen to her if her parents found out. She turned to the internet and friends for information. And then, when she arrived at the hospital in distress, she was treated like a criminal, not a patient.

That some of her sentence was overturned, and some reduced is a relief. But it is not justice. At each point, the challenges Purvi Patel faced in getting safe reproductive health care were constructed by the policies Mr. Pence has supported, and fought for. The stigma she faced is the direct result of the shaming that the anti-choice movement has imbued into American culture for decades. Her story is an important harbinger for what could happen if these forces are allowed to flourish unchecked.

That is Mike Pence’s Indiana. And this will be Donald Trump’s America.