A Form Letter of Death for Paul O’Neal, the 18-year-old black teen shot in the back by Chicago police 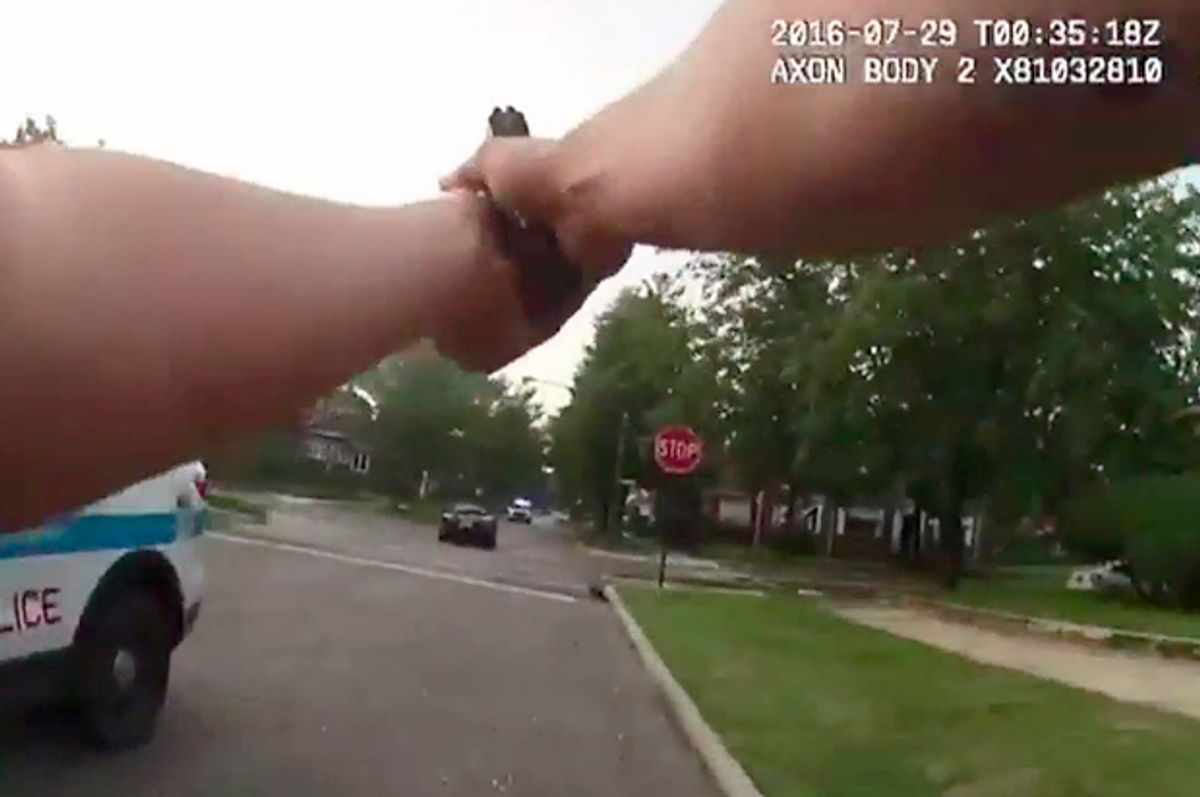 I have a standard format that I use when writing about the black and brown people killed by America’s out-of-control police. I call this my “form letter of death.” I have used it many times. It helps me to maintain my mental health. The logic behind its creation is the same as why I do not watch the modern day lynching videos of black folks by America’s police. As in the case of Eric Garner, Philando Castile, Alton Sterling, and now Paul O’Neal, I know what dead black people look like. I do not need to be reminded.

It is not that I am numb to the suffering of black and brown bodies caused by agents of the American state. The police are supposed to serve and protect the public, but all too often treat people of color as enemies to be targeted in an aggressive counter insurgency campaign. Rather, I am just not surprised anymore — and how can I be, given that as of July, America’s police have now killed at least 532 people (a disproportionate number of them black and First Nations); are 3 times more likely to kill a black person than a white person;  beat up and otherwise brutalize black people more than they do whites, and are quicker to shoot an unarmed black person than they are a white person.

To deny the fact that is rampant police brutality in America against non-whites, the poor, the working classes, undocumented residents, the mentally ill, and the handicapped is akin to denying the existence of gravity. One can deny that it exists, but said denial does not mean that said force has no impact on your and my life and body.

My form letter of death has the following structure.

There is a factual lede:

A recent internal report by the Chicago police revealed that its “own data gives validity to the widely held belief the police have no regard for the sanctity of life when it comes to people of color.”

I then pivot to the particulars of a given new case of police brutality:

On July 28, 2016, an 18-year-old black teenager named Paul O’Neal allegedly stole a vehicle and led police on a chase that ended in Chicago’s South Shore neighborhood. The car driven by O’Neal then hit a police SUV. Paul O’Neal fled the vehicle. The officers gave pursuit. Paul O’Neal was shot in the back and then handcuffed by the Chicago police. The body camera of the police officer who shot Paul O’Neal was not recording. The police shook hands after the chase and shooting of O’Neal. The police officer who shot Paul O’Neal also complained about likely being put on “desk duty for 30 days” because of his actions.

The use of deadly force by the Chicago police during this incident is against their training and policies.

Paul O’Neal is the 53rd person killed by Chicago police since 2013.

The video footage is so provocative that Chicago’s police department has warned of the potential for “civil unrest.”

I then offer a comment on the predictable narrative that is deployed by those who defend police thuggery and brutality against people of color, in general, and blacks, in particular:

Online and across the broader right-wing news entertainment media, white racial paranoiacs will (and already are) excuse-making and justifying the brutal killing of Paul O’Neal by the Chicago police. These defenders of police tyranny believe that O’Neal’s running from the police justified his street execution, that if black people were “compliant” and “listened to the police” they would not killed, police have a “dangerous job” and are often in “fear of their lives” so they must be given “the benefit of the doubt.” “Blue lives matter” and “we must wait for all the facts to come out before rendering judgment.” The black family is “broken” and “where is the outrage about ‘black on black crime.’” And of course, the new version of the racial slur “nigger” will be used as Paul O’Neal is described as a “thug.”

I then reject these racist, foolish, empty, and banal deflections:

The police are not supposed to act like brigands or criminals. This is the foundational principle that must govern how we discuss police brutality in the United States.

To this I add:

In this moment, we march and say “Black Lives Matter” because it is abundantly clear that since before the Founding of the United States, and through to the present, such a claim is not true. Black lives have been useful for America as laborers, entertainers, slaves, soldiers, artists, musicians, as objects of sexual desire, or the occasional political leader, but the full and equal humanity of black people, both as a group and as individuals, is something that the White Gaze and White America still very much doubts.

Next, I locate a given new incident of police brutality against people of color within the continuities of American history and color line:

There is tedium to the pain caused by police brutality against black and brown Americans.

The “national conversation” on race and police violence is not new.

In 1963, Dr. Martin Luther King said in his iconic “I have a Dream Speech” that, “There are those who are asking the devotees of civil rights, 'When will you be satisfied?' We can never be satisfied as long as the Negro is the victim of the unspeakable horrors of police brutality.”

In 1965, Robert Kennedy made it clear that, “To many Negroes, the law is the enemy. In Harlem, in Bed-Stuy, it has almost always been used against them.”

Those white Americans (and some others) who claim shock and surprise at each new incident of police brutality against those fellow Americans whose skin color is different from theirs are drunk on denial and live a life colored and distorted by white privilege.

I then make what should be, at least for decent and thinking human beings, a troubling observation about American culture.

Police brutality and violence against marginalized groups continues unabated because on a fundamental level (white) American society supports it. Police thuggery and violence — and the racist and classist criminal justice system for which the police are the frontline enforcers—are not a bug or a glitch in American society. They are features.

There is then a closing of sorts.

Paul O’Neal is the latest human entry in the Black Necropolis in the Age of Obama. He will soon, as is the routine in America, be joined by other black and brown bodies shot dead by America’s police.

Now, I would like to add a new part to the form letter of death I use for writing about black and brown people killed by America’s police.

I offer a question. What of our collective conscience? And for all of the platitudes about “American Exceptionalism” where is the shame and embarrassment? Are “we” not better than this?