The good (a growing labor force, more jobs to come), the bad (lagging wages) and the ugly (losses in manufacturing) 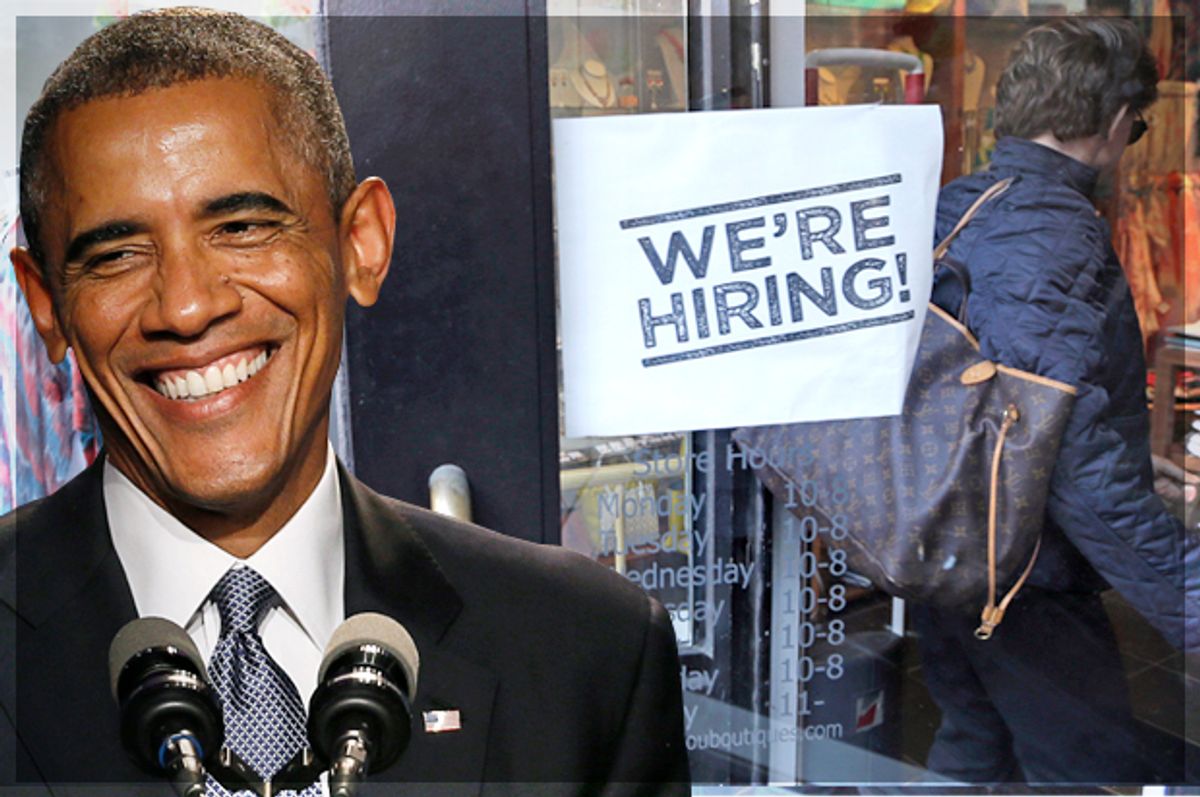 America can breathe a collective sigh of relief. Two months after hiring plunged to a nearly seven-year low, Friday’s jobs report showed robust hiring in July, hourly wages growing steadily (albeit lethargically) and gains in the number of people returning to the labor force.

The strong jobs report comes amid mixed economic signals, including a slowdown in overall economic output and falling business investment. But consumer spending is healthy and the manufacturing sector, which declined last month, has rebounded slightly from a last winter’s chill (though manufacturing jobs haven't — more on that below).

“June and July are running above the trend for 2016,” Mark Hamrick, a senior economist at Bankrate.com, told Salon. “That’s good news considering a slowdown earlier this year. It shows the post-recession recovery seems sustained."

The unemployment rate held steady at 4.9 percent, down from a high of nearly 10 percent when President Barack Obama took office in 2009 — a reminder that this report will bolster the Democrats claims that Hillary Clinton is the best choice to continue the policies that have brought Americans back to work.

The problem is that, as before, many workers have been left behind in the jobs recovery. According to Tara Sinclair, chief economist at the employment search engine indeed.com, while July’s jobs report was unexpectedly positive, the labor market is polarized. Americans with advanced degrees have no trouble finding and keeping jobs. Low-income workers are also finding work in retail and service industry jobs. But millions of semi-skilled working class Americans are finding it more difficult to find job security in the post-recession economy. Many of them remain out of the labor force and are not counted in the official unemployment rate.

“There’s a large population of middle-income people who aren’t finding long-term career paths,” Sinclair told Salon. “Even with a fantastic month like this, you will hear from lots of people who say that doesn’t reflect their own local labor market experience.”

1: Wages are growing, but far too slowly.

Average hourly wages rose by annualized rate of 2.6 percent, rebounding from a slowdown that began at the start of the year. But the growth remains significantly below the 3-percent historical average. Wages are being held back by the high number of working-age Americans people out there who have given up looking for work. Although we’re close to what’s considered full employment, employers still believe it’s fairly easy to fill job vacancies, so they are under no pressure to raise wages.

2: There has been an awakening in the labor force — have you felt it?

“The unemployment rate is not capturing the entire slack in the labor market,” said Polina Vlasenko, senior research fellow at the American Institute for Economic Research. “There’s this pool of people that are unemployment but aren’t counted because they’re not looking for work. But they’re willing to work if conditions improve.”

And now they are re-entering the job market. The share of Americans between the ages of 25 and 54 participating in the labor force ticked up in July, to 78 percent, a positive sign that people who are unemployed or have given up looking for work are returning to the labor force. The percentage has been gradually marching upward from a 36-year low in late 2010. The higher the labor participation by prime-age Americans, the more pressure employers will face to raise wages. The overall labor-force participation rate, which includes all working-age Americans, also edged upward for the second consecutive month, to 62.8 percent.

July saw a big jump in overtime, up to 3.3 hours from 0.1 hours in June. This results from employers holding out on hiring and instead giving their existing employees extra work. While this situation is not ideal, as it shows increased pressure on employers to squeeze more work out of their existing staff, it is a sign that employers face increasing pressure that will, eventually, lead to hiring more workers.

“Having more overtime is a good sign, but obviously we would like to see employers add more workers,” said Hamrick. “Wages are increasing, and as long as we get more than 100,000 jobs a month that will continue to improve the labor market overall.”

4: Manufacturing workers get left behind — again

Not everything in the July report painted a pretty picture. While professional and business services and health care continue to be the main drivers of growth, employment in food and drinking establishments has slowed to an average of 18,000 jobs per month compared to 30,000 per month in 2015. Construction, wholesaling and retail showed little change for the month but are up from last July. And jobs in the energy sector continued to decline — the industry has lost more than quarter of its jobs since its September 2014 peak amid a global glut in commodities like coal and oil. Finally, perhaps the most disturbing news is a statistic sure to be cited in this election year: manufacturing hiring declined 0.3 percent since last year. In the overall employment picture, this doesn't represent a huge loss, but try telling that to the workers in a sector where employment remains well below pre-Recession levels, seven years into the recovery.