It's OK to say the F-word: Sarah Jessica Parker should read Obama's "this is what a feminist looks like" essay

Another famous woman declares she's not a feminist, she just believes in equality—you know, like feminists do 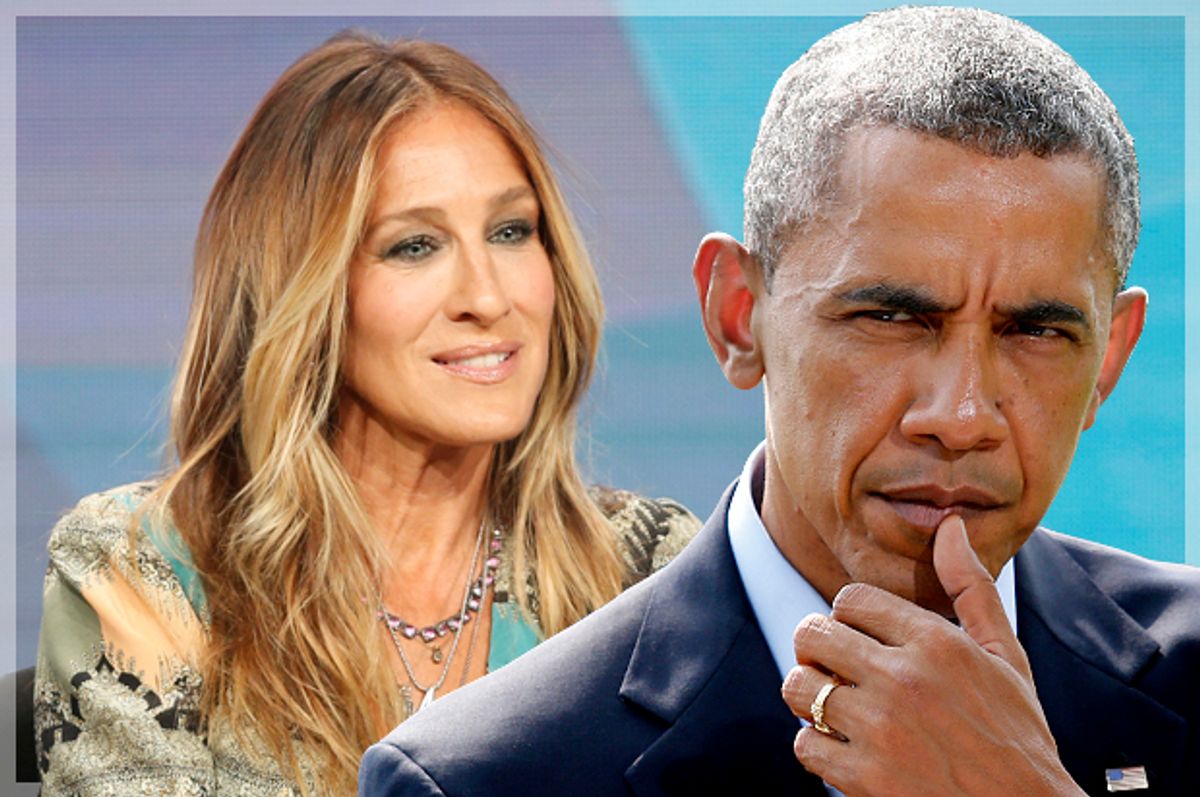 Celebrity women — and everybody else, for that matter — if you want to declare yourself as assuredly not a feminist, you have every right to hold that position. But wow, the rest of us would really appreciate it if you knew what feminism actually is before you announce that it's not your thing. Maybe you could let the president explain it?

In a cover story for the new Marie Claire, actress Sarah Jessica Parker speaks out about very feminist issues like pay equity, saying, "I would like women to get paid for the value of their contributions, not by old-fashioned ideas about gender. Women are paying the bills, getting it done, getting the kids here and there." And then she says, "I am not a feminist. I don't think I qualify. I believe in women and I believe in equality, but I think there is so much that needs to be done that I don't even want to separate it anymore. I'm so tired of separation. I just want people to be treated equally."

At least she's consistent — five years ago, she explained, "I’m the beneficiary of all the work my mother’s generation did. They did all the grunt work and handed us this world view. We were raised to think we could have it all, but there’s some reality that rears its head. So what you decide is 'I’ll die trying,' but try to be realistic about what can happen, day to day. I took a page from Wendy Wasserstein’s book. She said 'I’m not a feminist, I’m a humanist.'"

Parker, perhaps taking a hint from her iconic, codependent "Sex and the City" character Carrie Bradshaw, is just one of a lengthy roster of high-profile women who just can't seem to bring themselves to say the F-word. Yahoo's Marissa Mayer has said that like Parker, she believes in "equal rights" and that "women are just as capable," but that feminism is a "more negative word." In 2012, Katy Perry, while accepting the Billboard Woman of the Year award, declared, "I am not a feminist, but I do believe in the strength of women." Surprisingly, her arch rival Taylor Swift once took a similar view — when she was asked in 2012 if she considers herself a feminist, she replied, "I don’t really think about things as guys versus girls. I never have. I was raised by parents who brought me up to think if you work as hard as guys, you can go far in life." She changed her tune in 2014 and claimed the "feminist" mantle, telling The Guardian that when she was younger, "I didn’t understand that saying you’re a feminist is just saying that you hope women and men will have equal rights and equal opportunities. What it seemed to me, the way it was phrased in culture, society, was that you hate men."

Kelly Clarkson has said, "No, I wouldn’t say feminist — that’s too strong. I think when people hear feminist, it’s like, 'Get out of my way, I don’t need anyone.' I love that I’m being taken care of and I have a man that’s a leader. I’m not a feminist in that sense." Carrie Underwood similarly believes, "I wouldn’t go so far as to say I am a feminist, that can come off as a negative connotation. But I am a strong female." It's not only women who have an issue with the word, either. Two years ago Pharrell explained that, "I don't think it’s possible for me to be that. I’m a man. It makes sense up until a certain point. But what I do is, I do support feminists."

I don't know what these people think feminism is, if not believing in strength and equality. If the word has a negative connotation, did they ever think maybe it's because people who are considered role models are so reluctant to say it? Fortunately, other public figures — like Joseph Gordon-Levitt and Ellen Page — don't have that problem. As Emma Watson explained in her powerful 2014 speech before the United Nations, "For the record, feminism by definition is: 'The belief that men and women should have equal rights and opportunities. It is the theory of the political, economic and social equality of the sexes.'"

It's okay to say the word. It normalizes the simple idea that men and women should be treated equally. Barack Obama gets that. Earlier this week, he wrote an essay for Glamour, speaking "not just as President but also as a feminist." Writing of his own two daughters, he said, "It’s important that their dad is a feminist, because now that’s what they expect of all men. It is absolutely men’s responsibility to fight sexism too. And as spouses and partners and boyfriends, we need to work hard and be deliberate about creating truly equal relationships."

If you're opposed to feminism because you truly dislike the idea of women being treated with dignity and respect, of having opportunities and education, you do you. But if you feel differently, heed the words of our president, who knows "what twenty-first century feminism is about: the idea that when everybody is equal, we are all more free."