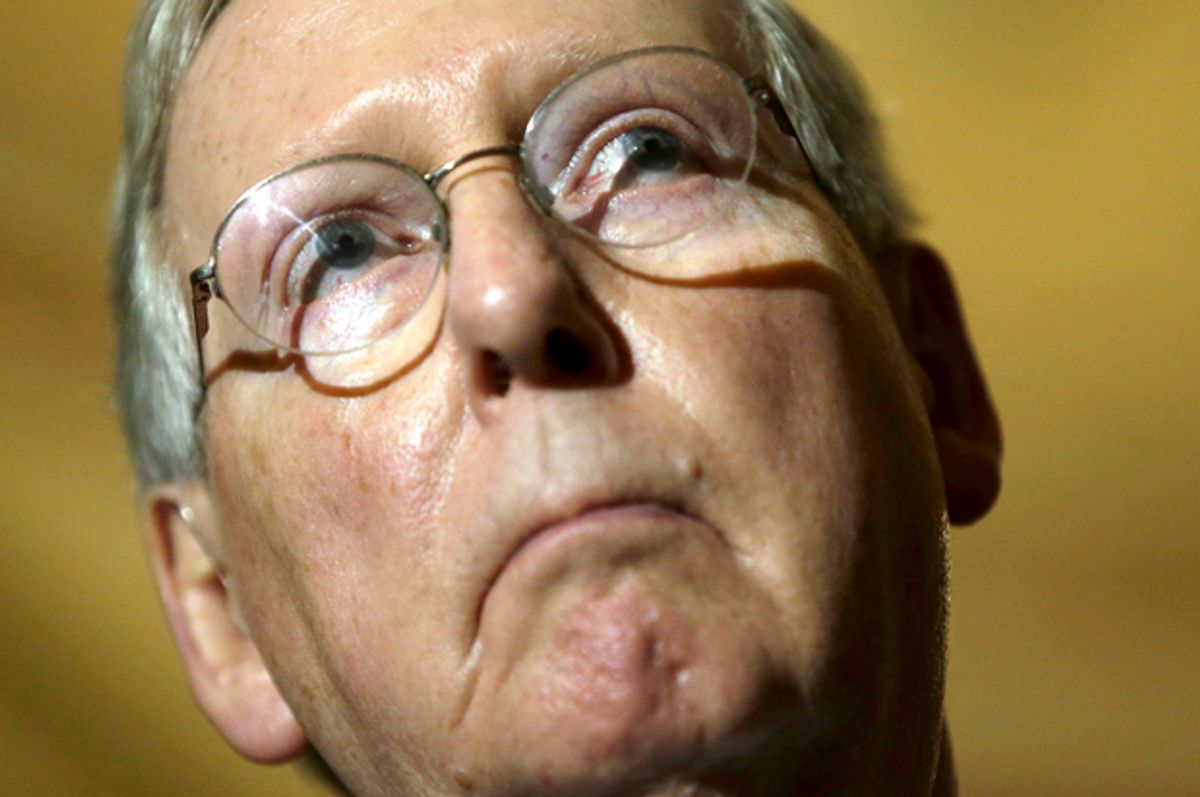 Remember Merrick Garland? He’s the appeals court judge Barack Obama nominated nearly five months ago to replace Antonin Scalia on the Supreme Court. That nomination has been languishing thanks to the recalcitrance of Senate Republicans, who moved to block any consideration of any Obama nominee and argued that (nonexistent) precedent and (nonexistent) principle demanded that the next president be given the honor of picking Scalia’s successor.

The glaringly obvious real reason behind the obstructionism was that the Republican Senate saw an opportunity to have a Republican president nominate the next Supreme Court justice and restore the court’s conservative majority. Back when they first made the arguments for obstruction (i.e. almost immediately after Scalia died in February), it was an open question as to who the Republican nominee for president would be. That question has since been answered: they’re stuck with Donald Trump, and that unfortunate reality has thrown the Republican Senate leadership and the GOP Senate caucus into a politically untenable situation as it tries to maintain its majority while also denying Obama another Supreme Court pick.

You might have noticed, but Donald Trump is in the middle of an extended implosion just two weeks after accepting his party’s presidential nomination. He’s fighting with a Gold Star family, he’s refusing to endorse congressional Republicans in their primary races, and he and his surrogates keep getting caught in increasingly shameless and extravagant lies. This has taken a toll on Trump’s poll numbers – in an alarming development for Senate Republicans, Trump is tanking in states like Pennsylvania and New Hampshire where vulnerable GOP incumbents are up for reelection. The lower Trump sinks in these states, the higher the likelihood the down-ballot candidates will fall with him.

Were Trump to continue along this downward trajectory, Senate Republicans would be faced with a couple of options, neither of which are good. The first is to stick with Trump, white-knuckle it all the way to Election Day, and pray that doing so won’t result in the GOP losing the presidency, the Senate majority, and the next Supreme Court nomination(s).

The other option, if things got bad enough, would be a hard break between Senate Republicans and their presidential nominee. Should Trump’s numbers in battleground states worsen as the calendar drags on, we could see the Senate GOP’s political self-preservation instincts begin to override partisan loyalty:

Were that break to happen, it would mean that Republicans will have given up any hope of winning the presidency and making the next court pick and are focused exclusively on salvaging the Senate. It would also be an admission from the Senate Republican leadership that their obstructionist Supreme Court strategy was a sham from the get-go.

Their case for blocking Garland has always rested on the argument that the people deserve their say in who gets to make the next nomination. If Senate Republican leaders are forced to reverse course on Trump out of political expediency, then they will have undermined their stated argument and acknowledged that their own party’s voters made an unacceptable choice for the presidency.

Regardless of what happens, Trump is proving to be less and less electable with each passing moment, which means the Senate GOP’s obstructionist gamble is already careening towards failure. So now they’re caught in an awkward place in which they’re pretending to stand on the high ground of principle while also trying to avoid being dragged down the low road by their presidential nominee.

And while it is tempting to say that it’s Trump who put the Republicans in this situation, the truth is that they brought it on themselves. The move to block Merrick Garland was a blatant attempt at a power grab and an extraordinary break from political norms, and the excuses Senate Republicans tried to hide behind were transparently cynical. No one was fooled by what they were trying to pull, and the fact that the whole strategy came to rely on the political acumen of Donald Trump offers at least some proof that karmic retribution is real.