The damage is done: Republicans plotting a Trump "intervention" are way too late

Panic has spread within the Republican Party, but the time to stop the Trump trainwreck was months ago 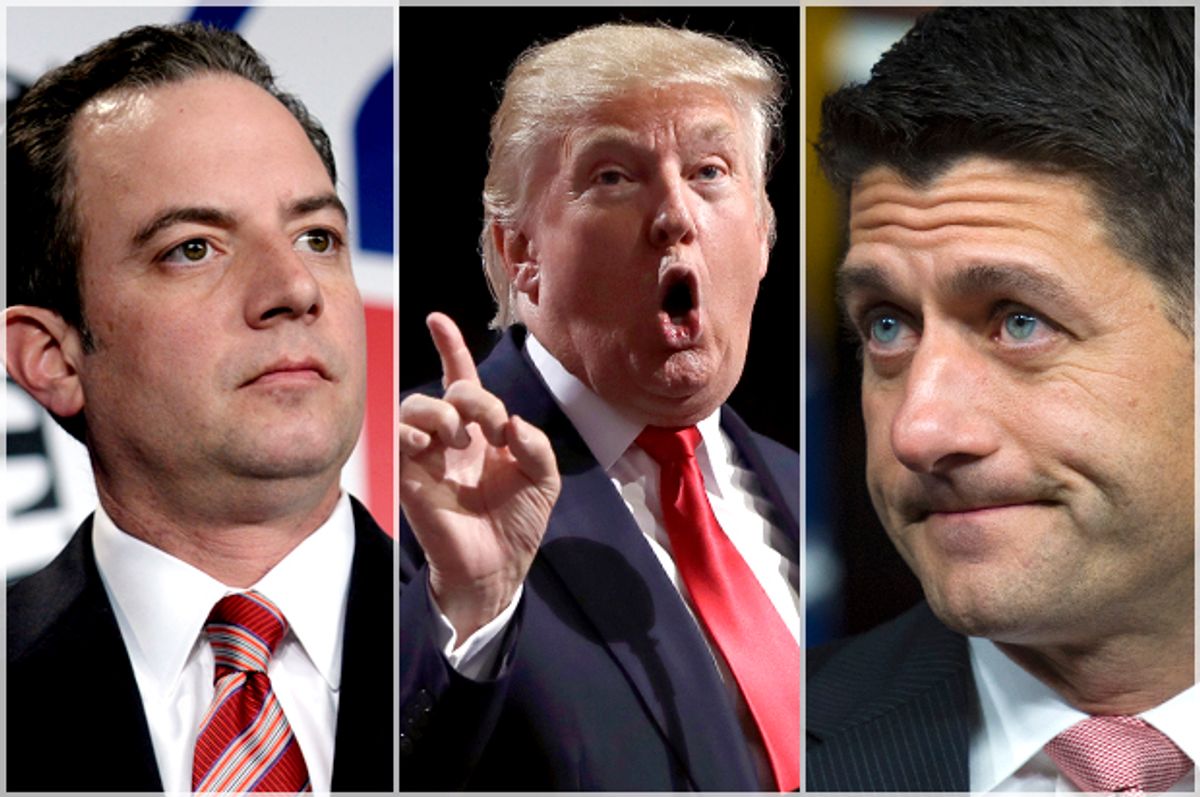 Republicans had a plan: warily endorse Trump while keeping a proper distance from his incendiary remarks. It was simple, really. This election wasn't about Trump so much as Clinton. If you convince voters that the republic can't survive another Clinton administration, supporting Trump becomes a kind of duty. He may be racist and temperamentally unfit, but he's not Hillary and that's enough.

Behind the scenes, GOP leaders probably convinced themselves that there wasn't a choice. Trump was wildly popular among the base, and he brought thousands of new voters into the party (a good deal of which are white nationalists, but their votes count all the same). Usurping Trump would alienate this new wing of the party, which would depress turnout in November and endanger down-ballot candidates. Such was the thinking of folks like House Speaker Paul Ryan and RNC Chair Reince Priebus, who, whether they like or not, are the faces of this strategy.

However logical, this was a short-term plan that prized immediate gains over long-term costs. It also underestimated the depths to which Trump would sink. As I wrote Wednesday, the Trump campaign is imploding in dramatic fashion, and doing permanent damage to the GOP brand. Thanks to a needless PR battle with the family of a slain soldier, Trump seems finally to have crossed a moral line – or at least a moral line that Republicans recognize.

Now the panic is setting in. NBC News reports that several Republicans close to Trump – including Rudy Giuliani, Newt Gingrich, and Priebus – are “plotting an intervention with the candidate.” To be fair, a source with ties to the Trump campaign told me there is “zero” truth to these reports. Nevertheless, the fact that once-supportive Republicans are publicly questioning Trump suggests the panic is real and growing.

There are also reports that GOP officials are entertaining scenarios in which Trump, for unstated reasons, drops out of the race. Jonathan Karl of ABC News writes that “senior party officials are so frustrated – and confused – by Donald Trump's erratic behavior that they are exploring how to replace him on the ballot if he drops out.” This is wish-thinking, however. The RNC cannot force Trump to quit. He would have to voluntarily exit and he would have to do so by early September in order to replace him on the ballot in most states.

Good luck with that.

I don't know what Trump actually believes, but this much is evident: He. Will. Not. Change. This ought to be obvious to everyone now. Still, though, a few Republicans are grasping for hope. One operative, quoted in a revealing Washington Post report, said “A new level of panic hit the street” after Trump's public slander of the Khan family and that “It's time for a serious reset.” Really? A reset? Here's what Trump said on Wednesday: “The campaign is doing well. It's never been so united. Right now it's the best in terms of being united since we began” Does that sound like a candidate on the verge of a reset?

How many times have we heard a “pivot” was imminent? It's not happening, and it was never going to happen. It was a self-serving delusion on the part of Republicans to believe otherwise. Worse still, it was an insult to voters who listened to Trump's racist bile month after month. Would it satisfy anyone to learn that Trump was just pretending to be a bigot all this time? A man who feigns bigotry for votes is arguably less respectable than an earnest bigot who believes the garbage he spews.

In any case, Trump's image can't be rehabilitated – it's too late for that. He's a lost cause and Republicans are stuck with him. I've argued Trump doesn't actually want to be president, but he needs to lose without appearing to quit in order to preserve his brand. He's already planted the idea that the election is rigged. When he's trounced in November, he'll cry corruption and his audience will believe it like they believe the rest of his fictions. It won't matter that he self-destructed, that he did everything possible to lose this election. He'll be the victim of a “system” his supporters don't understand but hate passionately.

And the pile of rubble in his wake will be the Republican Party.