Journo asks if U.S. can deduct $100 of its $40B aid to Israel for the girl's bike, gets replies about "security" 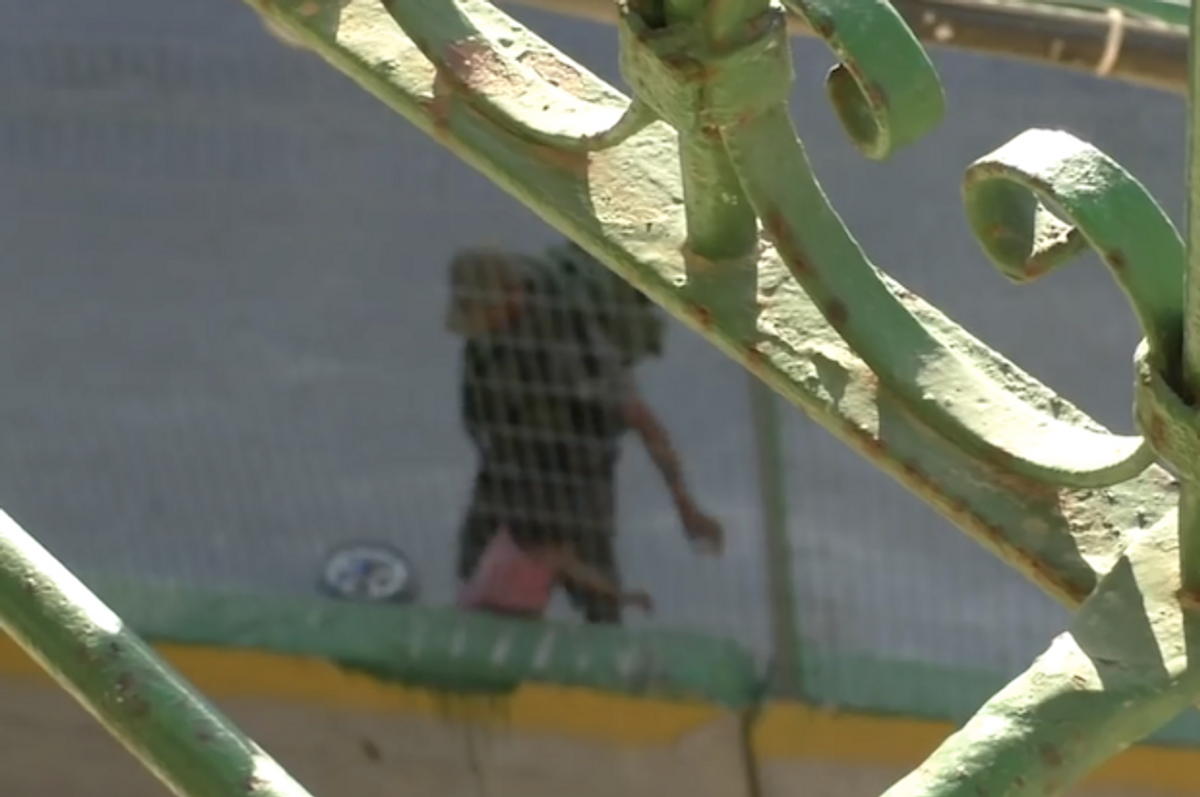 In a surreal moment in the daily press briefing on Thursday, a reporter asked the U.S. State Department spokesperson about the theft of the bicycle of a crying 8-year-old Palestinian girl by Israeli occupation forces.

The State Department spokesperson responded robotically with a detailed description of Israel's "security concerns," its "strong democracy" and its "ironclad" alliance with the U.S.

A widely circulated video published by an Israeli human rights organization this week shows Israeli police officers taking the young girl's bike and throwing it in nearby bushes.

The video was taken in late July in the Palestinian city Hebron, in the occupied West Bank. It was published by B'Tselem, The Israeli Information Center for Human Rights in the Occupied Territories.

The Israeli officers later told investigators they took the child's bike in order to protect her.

Another report released this week by B'Tselem details how, on July 19, Israeli forces shot a black sponge round at the chest of a 10-year-old Palestinian boy, killing him.

"Should Israel compensate this little girl for the bicycle?" the reporter asked, 35 minutes into the briefing.

The State Department spokesperson said he could not answer the question. He instead talked about "the tensions that exist in Israel regarding security and security concerns."

"But you subsidize Israel to the tune of billions of dollars," Arikat replied, alluding to the $3.1 billion in unconditional military aid the U.S. gives to Israel every year.

"Should you deduct $100 from the $40 billion or so that you’re about to give Israel for the next 10 years, and say this is to replace the bicycle?" he asked.

Toner responded with a long discussion of "Israel’s national security interests" and the U.S.'s "ironclad" alliance with Israel, calling it "a strong proponent of democratic values in the region."

He then briefly added that he is "not aware of any efforts" to compensate the Palestinian girl.

Watch the bizarre interaction below. A transcript of the discussion follows the video.

SAID ARIKAT: Last week, an Israeli soldier in the occupied city of Hebron roughed up a little Palestinian girl on a bicycle, and then he took her bike and destroyed it. My question to you is very simple: Should Israel compensate this little girl for the bicycle? Very simple.

MARK TONER: So I don’t know that that’s a question we necessarily should answer from the podium of the State Department, but what I’ll say is we understand the tensions that exist in Israel regarding security and security concerns, but – and I’ve seen the video; I know what you’re talking about – it’s also legitimate to say that what’s portrayed in that video is concerning and raises emotions on the part of many people who see it, and that any security forces – and I’m talking about not just Israel’s, but any security forces around the world – have a difficult job. We understand that they have to balance a lot of factors in carrying out their duties, but they also need to be aware of how their actions portray what they’re doing and the reasons behind what they’re doing to the rest of the world. So that’s a question for the Israeli authorities to speak to. I’m just offering my opinion.

SAID ARIKAT: But you subsidize Israel to the tune of billions of dollars.

MARK TONER: We do.

SAID ARIKAT: Should you deduct like $100 to pay for that bicycle? It’s a serious question.

SAID ARIKAT: Should you deduct $100 from the $40 billion or so that you’re about to give Israel for the next 10 years, and say this is to replace the bicycle?

MARK TONER: Said – so I spoke about this a little bit yesterday. Our security relationship with Israel is important both to Israel’s national security interests as well as our own, as well as the region’s, and it’s vital that we maintain that close cooperation. And, frankly, that relationship, as I said yesterday, is ironclad. Israel is a strong democracy in the region and a strong proponent of democratic values in the region. We’re looking at this incident. I agree that, again, for those who watched the video, I can see where it raises emotions and raises concerns. And what we’ve always said – and that bears – that is true for Israel’s security forces or Israelis, as well as for Palestinians – is that all sides need to bear in mind and take – or make efforts not to escalate tensions and be aware that their actions could escalate tensions in what is already an overly tense situation. And I think that’s our message.

SAID ARIKAT: So you don’t – you will not urge Israel to compensate this little girl --

MARK TONER: I’m not aware of any efforts on that part.

MARK TONER: I’m not aware that we – and I’m not even sure we could do that.