The right's Trump phenomenon: Why the left won't spawn a policy-free demagogue any time soon 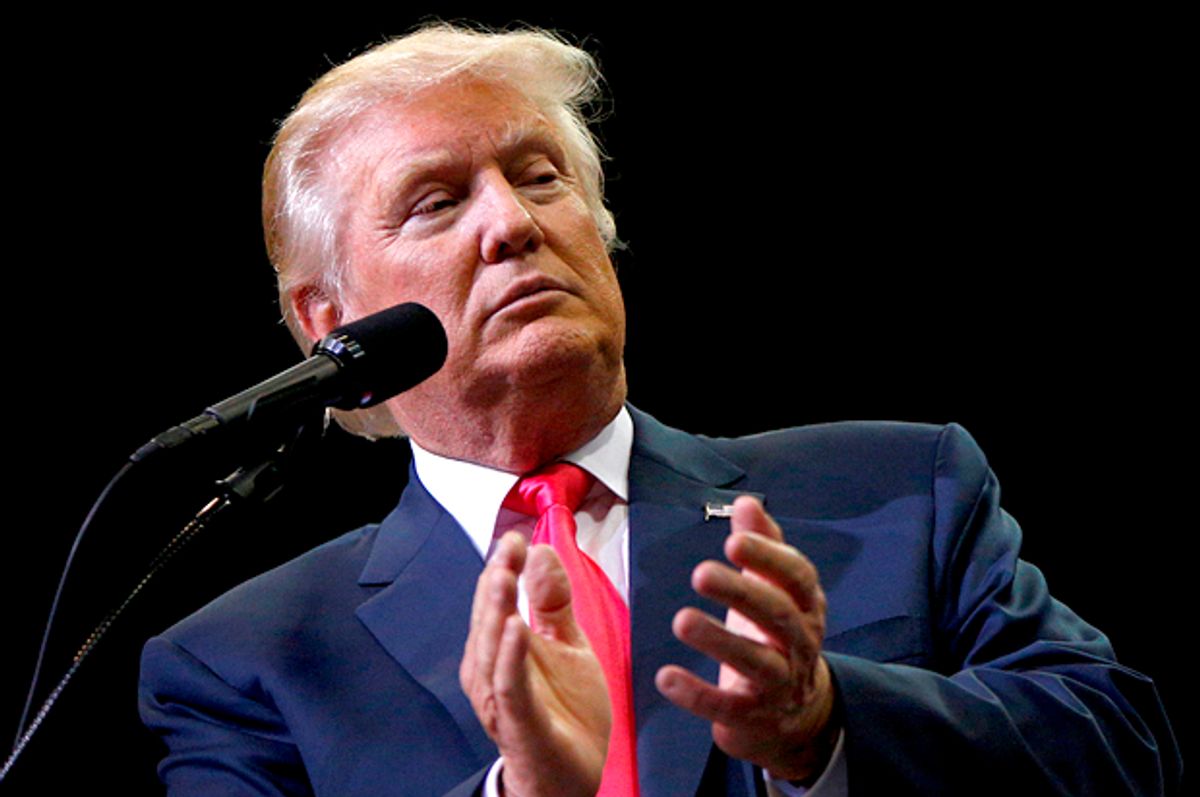 In a recent column and tweetstorm, Ross Douthat challenges the progressives who have argued in favor of #NeverTrump. He claims that the decision is harder than it initially seems for conservatives, writing, “Asking Rs to vote for Hillary is a little like asking Ds to vote for Newt Gingrich running on Ted Cruz's platform.” The analogy isn’t entirely accurate. According to the most widely accepted measure, Cruz is far more to the extreme right than Clinton is to the left. But there’s a further problem with the question: is it possible that Trumpism could arise on the left? Could an insurgent challenger so far out of the party’s mainstream manage a hostile takeover of the party? It’s difficult to imagine, yet then again, so is the current reality.

However, there are structural, ideological and demographic reasons to believe that Trumpism is a phenomenon unique to the GOP. After all, Trump doesn’t have an ideology, and throughout his career has preferred whichever party is most expedient to him. He found fertile ground for his persona in the Republican party. There are several reasons why Trumpism could flourish on the right, but not the left.

It’s important to understand how the rise of Trumpism is rooted in structural differences between the two parties. Political scientists Matt Grossmann and David Hopkins have explored these differences in depth in a series of papers that are now a book. They show that we can expect “Republican politicians to discuss policy in broad strokes and Democratic politicians to emphasize particular policies aimed at each constituency.” On the right, candidates are rewarded for commitment to ideology, while on the left candidates are rewarded for policy achievements. This was on display in debates, where GOP candidates gleefully discussed which war crimes they would commit, while Clinton and Sanders debated their roles in passing progressive legislation. The GOP base was far more susceptible to Trump’s policy-free demagoguery than the Democratic base.

Grossmann and Hopkins also find differences in views about governance and compromise in the parties. Democrats are consistently more favorable toward compromise than Republicans. In the 2016 American National Election Studies pilot study, 69 percent of Democrats said they would  prefer a candidate who “compromises to get things done” while 56 percent of Republicans prefered a candidate who “sticks to his or her principles no matter what” (see chart). Democrats are also more likely to say they want party leaders to move in a moderate direction (rather than a liberal or conservative direction). Trump’s bullying, uncompromising stance plays far better with Republicans than a similar stance would with Democrats. Grossmann and Hopkins also note how the Democratic coalition is an interest group network politicians must navigate. To win a Democratic primary, former Obama campaign data director Micheál Keane notes, a candidate has to win over and woo a number of interest groups: abortion rights groups, labor, the NAACP, and others. On the right there isn’t a network of interest groups but rather a few powerful donors driven by ideology. The RNC autopsy warned after 2012,

The weakened party apparatus and overwhelming power of the donor class made preventing Trump more difficult for the GOP.

These structural factors have pulled the right further away from public opinion on key issues. Big donors have demanded increasingly extreme positions on issues related to economic inequality and global warming. Pro-lifers have pulled the party dramatically away from the mainstream on abortion -- only 12 percent of Americans agree that abortion should never be permitted, the GOP position on abortion. On the issue of gun control and a path to citizenship, the GOP is deeply at odds with public opinion.

At the same time, Fox News has presented an alternative reality to viewers, where Obama is a Muslim who has destroyed the economy and “Sharia Law” is taking over America. There are many reasons from the political science literature to believe that Fox News has meaningfully affected the preferences of its viewers. Grossmann and Hopkins find (direct download) that Republicans are far more skeptical of traditional news outlets than Democrats (see chart). Fox News is hardly the furthest right: websites like The Daily Caller, the Drudge Report and Breitbart have all pushed the narrative that even far-right Republicans like Paul Ryan and John Boehner are left-wingers, while centrist Democrats are Sandinistas. The same media that exposed Trump as a fraud is the media that the GOP trained their constituents not to trust. Political scientists agree that ideologically, the Republican Party has moved dramatically right, while the Democratic Party has moved only modestly to the left (this trend is referred to as “asymmetric polarization”). In addition, the Democratic moves to the left have largely coincided with public opinion. On abortion, gay marriage, the minimum wage, climate change, immigration, gun control and higher education, there is persuasive evidence that Democrats are moving toward the American public, not away from public opinion. Democrats are embracing the younger, more diverse and more progressive electorate, while Republicans have remained immune to change, partially by shrinking and manipulating the electorate, partially because of built-in structural and geographic advantages (for instance the malapportionment of the Senate, the electoral college and the fact that Democratic voters are packed into cities). All of this means that the Republican Party has become increasingly out of touch with American public opinion.

These two factors have driven demographic divides between the two parties. The GOP has known for a long time that it has been becoming the party of white resentment, but did nothing to stop it. Indeed, rather than court people of color, the Republican Party has engaged in an extensive campaign to ensure that black, Latino and Native American people can’t vote. As Harvard scholar Leah Wright Rigueur has argued, though the GOP has recognized its failure to win black voters for half a century, it has only dug itself deeper in a hole, ignoring dozens of reports suggesting ways the party could change.

The result is that the GOP has remained incredibly white, even as the country has become more diverse. As political scientist Michael Tesler shows, Trump’s primary coalition was far more racially resentful, opposed to immigration and colder to Muslims than the Romney and McCain primary coalitions. Trump’s rise is rooted in white backlash to the Obama presidency and the increasing diversity of the nation, but had the Republican Party embraced a more diverse electorate, his path to the nomination would have been far more tenuous. Instead, the overwhelmingly white Republican electorate meant that the politics of resentment could propel Trump to the nomination. The Republican base is committed to ideology — but elites wrongly believed that ideology was small government conservatism, not white supremacy. It’s been repeated ad nauseum, but economic plight among people of color and young people hasn’t led them to embrace Trumpism. We have to look somewhere other than a poor economy. Trumpism represents the backlash of a disempowered white, male majority. It could only flourish in a party where they make up a large share of primary voters.

There are other factors that are relevant, but likely don’t contribute as much as Republicans might wish (the overcrowded primary, strategic mistakes by campaigns and embarrassing debate gaffes). A less feckless party never would have embraced Trump (who spent more than a decade in the GOP orbit before his successful run), and would have nipped his candidacy in the bud. A semi-competent one would never have awarded him the nomination at their convention.

Douthat wants to imagine a Democratic Trump. However, the causal factors that give rise to him simply can’t be replicated on the Democratic side. In the 1990s, when the Democrats faced three terms out of power, their response was not extremism, but rather a centrist, Southern Democrat. This is not to say the Democratic Party is without flaws. Democrats have embraced coded racism. They are often swayed by powerful donors, who exert too much influence over the party. The Democratic Party’s foreign policy and surveillance policy differ very little from the Republican Party’s. On gay rights, immigration and mass incarceration, Democrats moved far too slowly to halt injustices. However, the Democratic Party’s diverse voting base, interest group infrastructure, ideological moderation and commitment to governance means that Trumpism wouldn’t as easily take root.

The factors that created Trumpism have festered for decades, and continue to this day. Republicans still aren’t making serious efforts to win over people of color, but are working tirelessly to implement Jim Crow voting restrictions. Budgets are still created to benefit the donor class. Trying to defeat Trumpism without ameliorating the structural causes that created him will only entrench the problem. Other candidates running on the banner of Trump could be around for decades. After all, the party has courted white supremacists and misogynists before. The first step to solving Trumpism is admitting you have a problem.