Trump’s suicide mission: He’s not trying to destroy his own campaign — the destructive urge he represents is much bigger than that 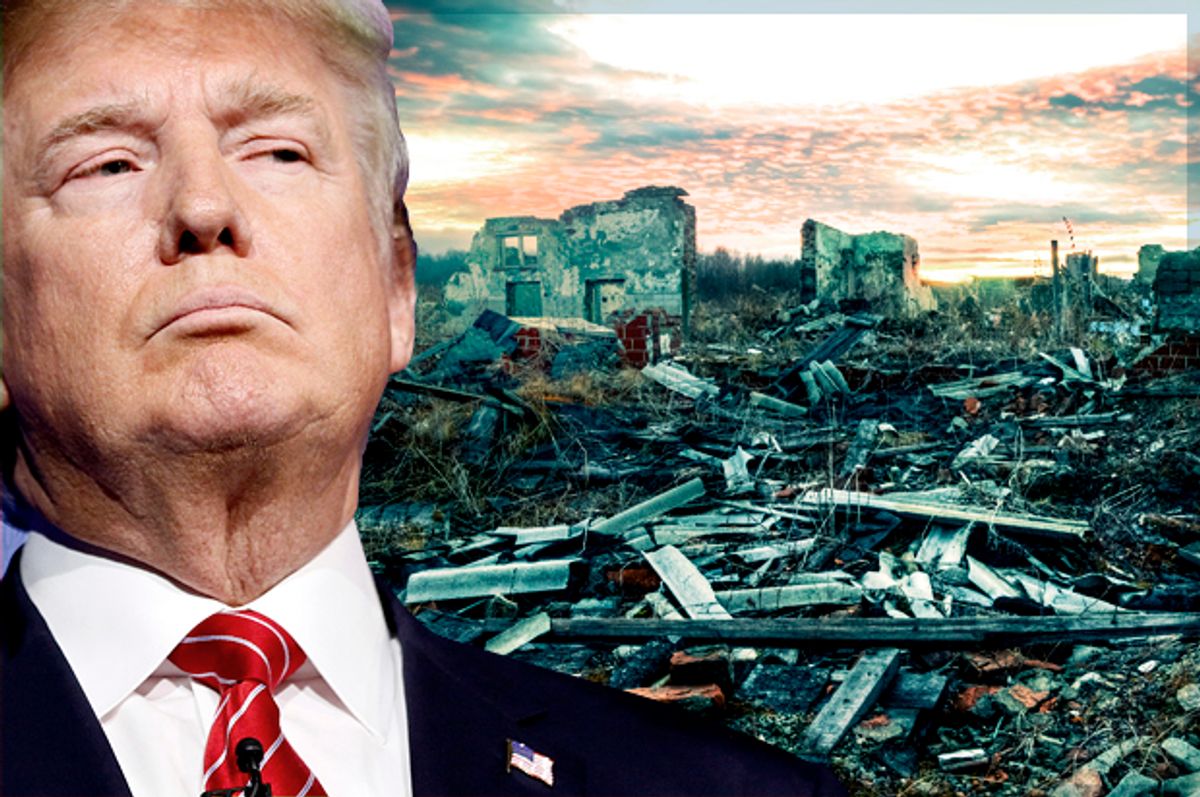 Amid the unfolding national catastrophe of the Donald Trump campaign, we are once again hearing the theory that Trump doesn’t really want to win the election, or to be president. In defiance of all real-world evidence about Trump’s aspirations and intentions, journalists keep on speculating that he picked a fight with Khizr and Ghazala Khan, the parents of a United States Army captain killed in Afghanistan, in a last-ditch effort to do something so universally offensive as to destroy his candidacy. (All previous efforts having accomplished precisely the opposite.) Barely two weeks after the final collapse of backroom plots to nominate someone else at the Republican convention in Cleveland, we’re told that GOP power brokers are now holding secret meetings about how to nominate someone else if Trump withdraws from the race.

Any such scenario would be entirely without precedent, but what else is new? There has been nothing like the Trump campaign before, not in American political history and perhaps not in history, period, which means that everything that happens is unexplored territory. But all such Trump-truther theories are overly focused on the individual psychology of Donald Trump, which to my mind is an impenetrable and deeply uninteresting phenomenon. There is almost literally no there there; Trump has a public persona but not much of a personality. These theories fail to observe the observable, in Joan Didion’s phrase. They fail to perceive the bigger picture, meaning the contemporary American disorder of which Trump is just one especially gruesome and spectacular manifestation.

Donald Trump is behaving very much like a megalomaniacal billionaire with no qualifications who wants to be president, or at least wants to be elected president. (This might seem to be splitting hairs, but those aren’t the same thing.) The important questions are more about why he’s doing such a nonsensical thing, and why he has been so successful, than about whether he has some unconscious or unspoken desire not to succeed.

I spent the week after the Republican and Democratic conventions on a personal visit to Florida, which as usual will be the crucial battleground state in this election. After experiencing the bizarre strip-mall isolation of the Gulf Coast in August, with the airwaves already blanketed with ads for Trump and Hillary Clinton, and weather so unbearable that no one ventures outside if they can help it, I’m inclined to think that the inexplicable emergence of Trump tells us less about him than about the country that produced him. As I see it, Trump is on a suicide mission, acting out a deep-seated national desire for self-destruction that runs alongside America’s more optimistic self-image and interacts with it in unpredictable ways.

Trump traffics in pseudo-uplifting nostrums about making America great again and how much “we” will “win” once he is president. But he has never offered any specific ideas or policy proposals, only incoherent fantasies that combine isolationism, protectionism, a police state and total war against amorphous enemies. I have never believed that even his most passionate supporters take his proposals about the zillion-dollar border wall, the deportation of all undocumented immigrants or the exclusion of all Muslims at face value. Those things represent a yearning toward the imaginary and the impossible, and a nihilistic rejection of all reality. No candidate who proposes such things — or who asks why we can’t use nuclear weapons, since we have them — is actually selling hope or optimism.

Donald Trump’s suicide mission is not personal, first of all. If I had to guess, I would say that he wants to be president but doesn’t know why, and has no idea what he would do with the office if he wins. Trump wishes only for his own glorification; he isn’t intelligent enough or complicated enough to yearn for his own destruction. Whether that translates in practice to a desire to lose the election, with the side benefit of endangering democracy by claiming that the system is corrupt and the results were rigged — well, that sounds like a pretty good guess, but as I said earlier I don’t know and I don’t really care. Trump’s suicide mission is ultimately about something much larger than his own presidential campaign, and also much larger than demographic clichés about the declining white majority.

America is experiencing a health crisis on an enormous scale — a crisis that is simultaneously physical, psychological and spiritual and is hardly ever understood in holistic terms. If Trump is the most prominent symptom of this systemic disorder at the moment, he is not its cause or even its leading indicator. For starters, this crisis encompasses epidemic rates of obesity and epidemic rates of suicide, dramatic evidence of a wealthy country that is literally killing itself. It’s about a nation of worsening social isolation and individualized info-bubbles and pathological delusion, a nation that spends more per capita on healthcare than any other major Western power to achieve worse outcomes, and where Baconator Fries are $1.99 at Wendy’s.

More than one-third of American adults are obese, and close to 70 percent are overweight. Rates of obesity and associated ailments are highest among Americans with lower incomes and less education. That correlates strongly with support for the candidate who famously proclaimed, “I love the less educated,” at least among people who are white. There’s no way to ignore the racial element in this year of racial discord, division and discussion: African-Americans and Latinos are more likely to have obesity-related illnesses than whites, and far less likely to be Trump voters. As I say, Trump is an important signifier of our national pathology, but not its sole representative.

For all our understandable horror at mass shootings, police shootings and gang-related violence, most gun deaths in the United States are suicides. In 2014, there were more than twice as many gun suicides in as gun homicides. Suicide rates have reached their highest level in nearly 30 years, while murder rates remain near historic lows. Although suicide, like obesity, has increased across all socioeconomic and gender-ethnic categories, about 70 percent of the Americans who kill themselves are white men. Middle-aged white men with lower incomes are at particular risk — the group most likely to support Trump, and to express the incoherent racial and societal grievances he has channeled so expertly. (For reasons that are not entirely clear, blacks and Latinos are much less likely than whites to commit suicide.)

Some researchers have identified a troubling spike in preventable and more or less self-inflicted death among lower-income white people in America, the group that provides nearly all Trump’s support. This phenomenon includes suicide, alcohol poisoning, liver disease and drug overdoses, closely related to the waves of prescription-drug abuse and heroin addiction now visible in virtually every suburban or exurban community across North America.

But I’m not making a social-science case, based on statistical evidence, in arguing that there’s a connection between those physical and mental health crises and the political eruption signified by Donald Trump. I’m suggesting that the deductive or imaginative leap from one to the other is not all that far. I’m saying that the precarious mental state and multiple ailments of downscale white America have found a symbolic outlet in Trump, who offers imaginary remedies to real problems, vainglorious bluster masquerading as thought and hateful nihilism pretending to be hope.

I’m saying that the state of borderline psychosis produced by electronic consumer society leads to OxyContin addiction and Baconator Fries and a suicide epidemic and Donald Trump. Those things are not all the same, but they are interconnected. I’m saying that the landscape I just saw in west central Florida, whose inhabitants crawl mollusk-like from fast-food outlets to convenience stores to healthcare providers to office parks, in their SUVs and pickup trucks with tinted windows, is a landscape of cognitive dissonance and collective delusion. It’s the landscape of madness in general, and the flavor of madness provided by Donald Trump in particular.

We’ve been made acutely aware over the last several years that the fragmented and narrow-casted media landscape produces competing narratives of reality. Fox News viewers believe that Muslims, feminists and gays have joined forces to abolish the Constitution and institute Sharia law; MSNBC viewers believe a cabal of hateful bigots and the super-rich are conspiring to roll back all social reforms since roughly World War I. But the physical landscape of America, with its intense isolation and intense socioeconomic and racial segregation, creates competing realities as well. Donald Trump is not all that important in himself; he’s a fantasy projection created and nurtured by the lonely, frustrated and struggling white folks of Pasco County and Hernando County and places like them across the country.

One reason I felt alienated by the upbeat hyper-patriotism that led into Hillary Clinton’s speech on the last night of the Democratic National Convention was its blithe denial that anything is fundamentally wrong in America. There are small-minded bigots and there is Donald Trump and there is that other political party, the one he somehow caused to collapse like a papier-mâché castle left outside in the rain. Those things have somehow amounted to a threat to democracy, and all that is good and true in America. But the reasons why that might have happened were left unsaid and unexplored, beyond a few ambiguous phrases about people left behind by an improving economy.

No doubt the Democrats presented a much more inclusive and dynamic vision of America at their convention than the Trumpified Republicans did at theirs, and no doubt it’s better for my children and yours if Hillary Clinton wins the election. But Democratic cluelessness troubles me greatly. I’m not sure the Clinton-Obama-Clinton leadership of the Democratic Party has the slightest understanding of the physical and psychological dislocation of so much of America, the loneliness and desperation that has found its voice, for the moment, in Donald Trump. Why would they, since they are every bit as complicit in the political economy that made all this possible as the Republicans are?

Donald Trump is not the problem with America, and Donald Trump is not consciously trying to sabotage his own campaign. Maybe we should be grateful to Trump for what he has shown us. He is no more (or less) than the demonic personification of the central conflict in America, a nation torn by endless self-glorification, an insatiable hunger for Baconator Fries and the urge to put a bullet in its own head.