Ivanka's insulating power: What the Trump scion still doesn't get about sexual harassment

Harassment isn't a company culture issue, as she says, it's a legal one—and laws give strength to the powerless 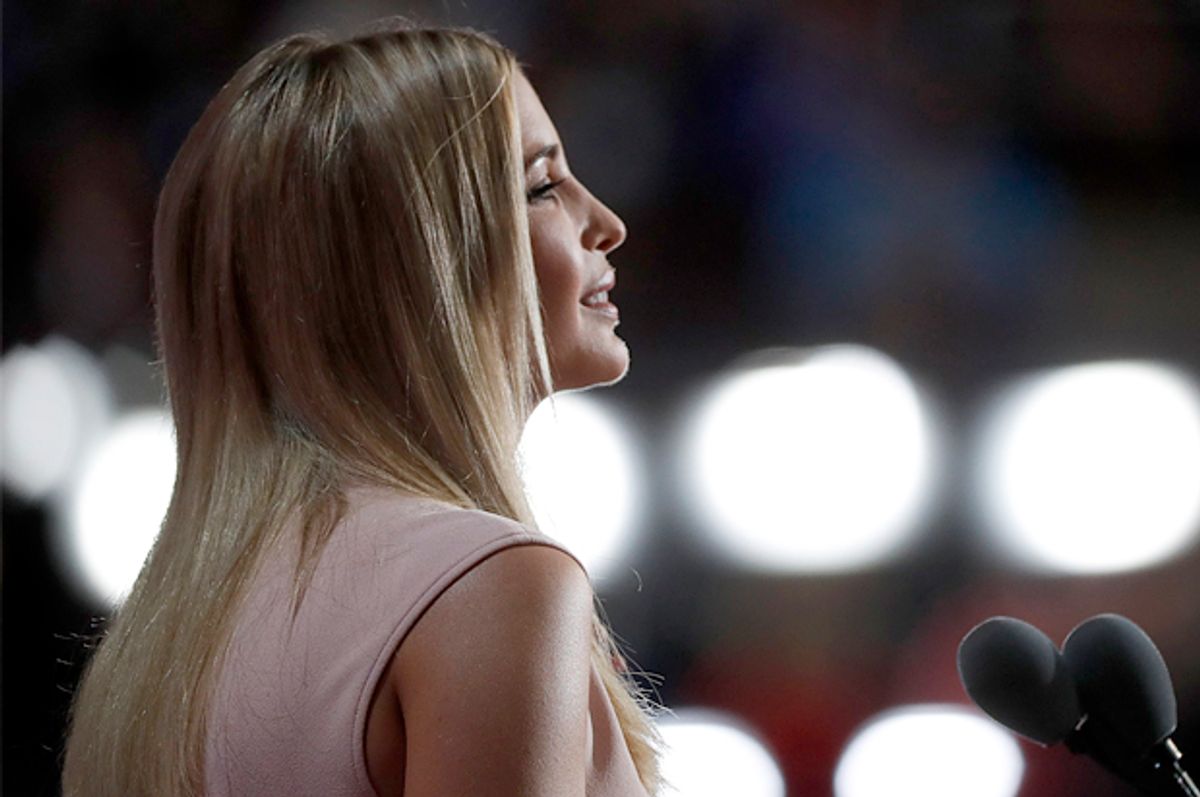 Given his knack for despicable behavior, it should come as no surprise that Donald Trump leaped to the defense of his go-to propagandist Roger Ailes, who resigned last month amidst a series of horrifying accusations of sexual harassment. The conversation took a personal turn when Trump was asked what daughter Ivanka might have done were she in the position of Gretchen Carlson, Megyn Kelly, or the other women who made similar allegations. “I would like to think she would find another career or find another company,” he replied.

Trump's son Eric and Ivanka, two of the most outspoken and active members of his campaign, had thoughts on the matter as well. When Eric was asked about the remarks, he expressed his support. "I think what he’s saying is, Ivanka is a strong, powerful woman, she wouldn’t allow herself to be objected to it,” he said. “And by the way, you should take it up with Human Resources... at the same time, I don’t think she would allow herself to be subjected to that. I think that’s a point he was making, and I think he did so well."

Many pointed to a passage from Ivanka's 2009 book to note that she was indeed the victim of harassment from whistling construction workers. “But in those cases, the workers never realized I was the boss’s daughter,” and they later apologized. Rather than going to HR, she suggested that women “[l]earn to figure out when a hoot or holler is indeed a form of harassment and when it’s merely a good-natured tease that you can give back in kind.”

Speaking more recently on none other than Fox News, Ivanka said, “I think harassment in general, regardless, sexual or otherwise, is totally inexcusable and if it transpires it needs to be reported and it needs to be dealt with on a company level.” She continued, “We have a very strong HR team at the Trump Organization, who is equipped to deal with these issues if they arise ... and you hope you have a culture in which they don’t arise. But when they do, it needs to be dealt with swiftly.”

On this point, the substance of Eric Trump's answer wasn't especially different than Ivanka's far better-received remarks. Such complaints ought to be taken seriously, both concede, but these are internal manners to be handled by HR. And while he took a great deal of heat for the assertion, Eric is also right to note that harassment is a matter of strength and power. There is a reason why it took so long for decades’ worth of allegations of sexual harassment against Ailes to come to light, and that targets such as Kelly and Carlson only spoke out after attaining considerable wealth and fame.

In this particular respect, Ivanka's handling of workplace whistles was a response to harassment that differed from the quid pro quo allegations against Ailes, not just in degree but in kind. (A difference in kind recognized by the law.) It is also worth noting that good-natured teasing, the kind that happens amongst peers, occurs on a level playing field. It is a playing field generally not shared by women and their harassers, often a strategic and intentional choice on the part of the latter.

But we also ought to acknowledge that Ivanka didn't manufacture her strength and power out of thin air by sheer force of will. She inherited both from her daddy, a man whose candidacy for president she is now publicly supporting. Not all women have the great fortune of being the boss's daughter. And in case the Trump kids need a refresher on the corporate hierarchy (perhaps they're confusing it with their family tree), the HR director reports to the CEO, the title of one Roger Ailes. In egregious cases, laws and laws alone are what prevent and curtail harassment. They give strength and power to the powerless.

Ensuring that women don't have to endure groping from their boss or capitulate to his advances in order to retain economic independence isn't like free snacks in the break room or casual Fridays. It's not a matter of corporate culture, but of civil rights. Ivanka seems to be pointing to her father's company as a somehow representative example of his stance on the issue. Never mind that he's openly admitted to reporters he hires women based on attractiveness and not qualifications, never mind that he harassed a woman on national TV, Ivanka suggests, the Trump Organization is a great place to work. And trust me, I would know.

But Trump is running for president, not angling for a promotion. And his campaign's collective response to this incident is representative of a disturbing governing philosophy. It is not unlike Donald's framing of his accessible buildings as an act of charity and kindness to the disabled community, rather than compliance with the Americans with Disabilities Act. It suggests a reversion to an old world order, a great America, wherein basic protections are luxuries doled out by generous beneficiaries, not rights it is the government's duty to safeguard.

Ivanka has somehow cultivated and maintained an image as the reasonable and savvy Trump, a badass entrepreneur [who reports directly to her dad at the company founded by her great-grandmother and grandpa.] “As a citizen, I love what he's doing. As a daughter, it's obviously more complicated,” she's said of his campaign. One might forgive her for tolerating or even excusing her father's misconduct out of filial loyalty, but certainly not out of patriotism. Her continued support of Donald “as a citizen” means that she inherited his grotesque opportunism, his racist brand of stupidity, or some combination thereof. Even if sexual harassment were, as she frames it, a cultural and not a legal matter, Ivanka Trump ought to think long and hard about the cultural impact of the hateful campaign in which she is playing a vital role. And the rest of us ought to think long and hard about the charmed status the socialite and heiress inexplicably continues to enjoy. If Donald Trump's candidacy has demonstrated anything, it is the danger of false idolatry.