It's still Trump's show: Journalists should avoid the temptation to assume Mike Pence is the power behind the throne

Mike Pence is being used to normalize the Trump ticket, but journalists must not take the bait 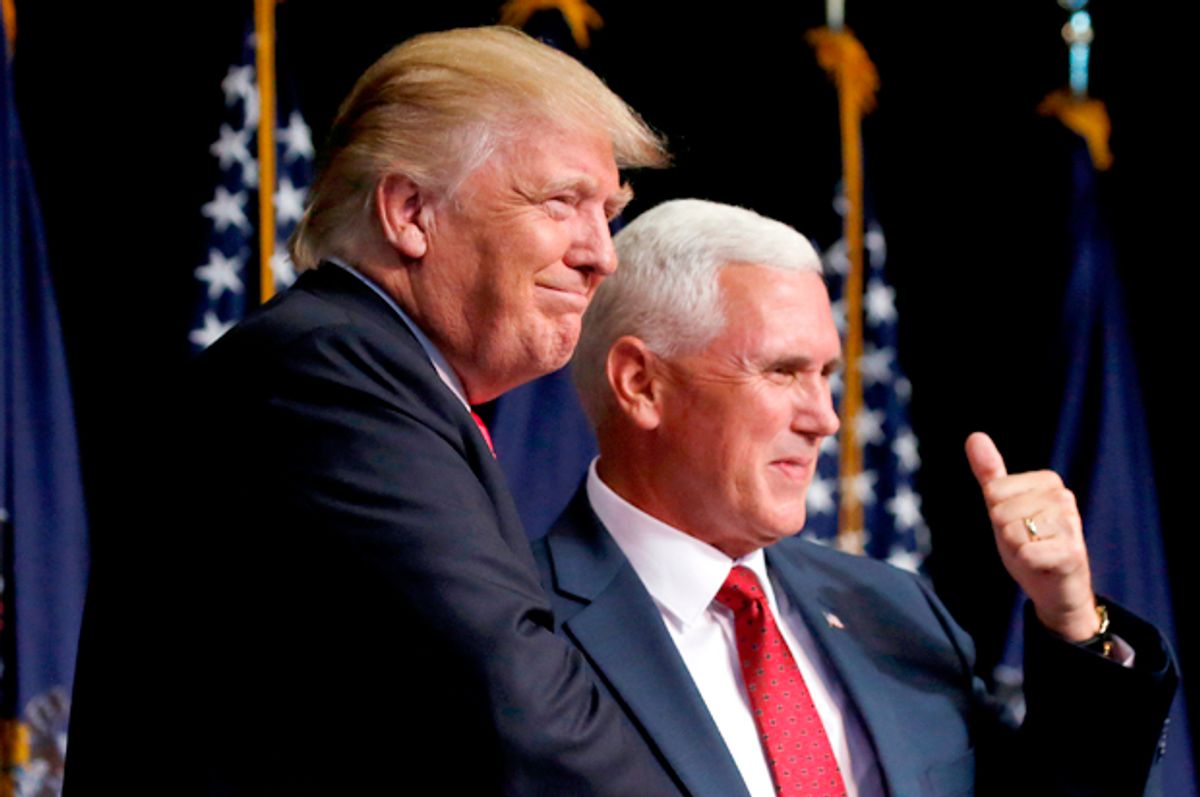 The Donald Trump candidacy has created a major problem for mainstream journalists. The campaign "upsets balance, that idealistic form of journalism with a capital 'J' we’ve been trained to always strive for," argues Jim Rutenberg in the Sunday New York Times.

In the past, journalists, striving to avoid accusations of bias, tended to frame elections as a contest of equals. Whatever bumps and scandals might come along, the assumption was that both the Democrat and Republican are experienced politicians who adhere to prevailing norms and play by the rules. But Trump has thrown a wrench into that process, by running a campaign so incredibly dishonest, so indifferent to the regular rules of politics, and so demagogic that the pretense of "balance" has been thrown out in favor of coverage that highlights the wide gulf of professionalism between the Trump and Clinton campaigns.

"This campaign is not merely a choice between the Democratic and Republican parties, but between a normal political party and an abnormal one," Ezra Klein at Vox argued. It's throwing mainstream journalists into a tailspin, struggling to navigate this whole new world where maintaining the pretense of "balance" feels impossible.

Enter Mike Pence. The Indiana governor chosen by Trump — barely chosen, anyway — as his running mate comes straight out of central casting, if you're looking for a boring, standard-issue conservative Republican: Religious, conservative, knows how to pander to racists and misogynists without saying anything too shockingly bigoted that makes headlines.

If Pence were the nominee, he would be enjoying the same "balanced" coverage that previous Republican presidential candidates get, where he's portrayed as roughly equivalent to Clinton in honesty and experience. His right-wing radicalism, from his creationist views to his belief that Disney is in the thralls of a feminist propaganda machine, would never get the same level of coverage that Trump gets for his racist comments or erratic behavior.

Because of this, Pence represents a very real temptation for the press, to recast him as the power behind the throne, a "real" nominee to slot into the standard "both sides", balance-focused coverage that has been typical of elections past. To paint this race as a Pence/Clinton one, in other words, and treat Trump like an entertaining sideshow who is bracketed off from regular election coverage.

After all, it's not ridiculous to think that Pence could have an unusual amount of sway over a Trump administration.

"It's pretty clear that Trump isn't going to have much interest in the details of government, which would lead to a lot of power vacuums being filled by other people in the executive branch," Scott Lemieux, a political scientist at the College of Saint Rose, explained to me.

Lemieux suggested it's not unreasonable to give a lot of weight to what Pence thinks about the issues, since "Paul Ryan and Mitch McConnell would be setting the legislative agenda" of the Republican party "and Pence is a conservative in a similar mold."

Certainly, many of the Republican delegates I spoke with at the Republican National Convention looked to Pence as justification for voting for Trump come November. In late July, the New York Times even reported a story, shared by John Kasich advisors, about Donald Trump Jr. promising potential running mate picks that the vice president would have control over both domestic and foreign policy, while Trump himself would take on the vague task of making "America great again".

Already, there's indications that Pence is stepping into the role of being the "real" candidate who will get the forgiving, "balanced" coverage the Republican usually gets against a Democratic nominee. After Trump made headlines by issuing baseless attacks on Khizr and Ghazala Khan, who criticized Trump at the Democratic National Convention and who lost their son in the Iraq War in 2004, Pence stepped up to do clean-up work, issuing a statement calling Captain Human Khan a "hero" and making all the respectful noises we expect out of a major party candidate to make when asked about soldiers who die in battle.

Pence has since dug in, using his rally time to praise Captain Khan and grab headlines that read far more like the ones you'd get in a typical election cycle, where candidates busy themselves praising our troops for their service instead of hinting that their parents are secretly terrorist sympathizers.

But journalists should not give into the temptation to allow Pence to hoodwink them into thinking he's the true voice of the campaign.

"Ultimately, vice presidents only have the power that presidents want to give them," Lemieux noted.

"Especially on foreign policy, I wouldn't bet that Trump delegates on big decisions," he added. "And it only takes one bad decision to potentially blow up much of the world."

Ultimately, it's important to remember that this is Donald Trump we're talking about, a man that couldn't resist talking about his penis during a primary debate and who had to be pried, kicking and screaming, off attacking the family of a fallen soldier. Even if he intends to let Pence be the power behind the throne, a man as impetuous and domineering as Trump will probably marginalize Pence the second his VP offers any real disagreement.

So no matter how comforting — or comfortable — as it may be for mainstream journalists to make Pence more central to their coverage of the Trump campaign, it's an urge that should be resisted. The man is only as powerful as Trump's whims allow him to be. And it's those whims, and how erratic they clearly are, that should stay at the center of coverage of this unusual election cycle.