John Waters, revolutionary: "Multiple Maniacs" is much more than camp 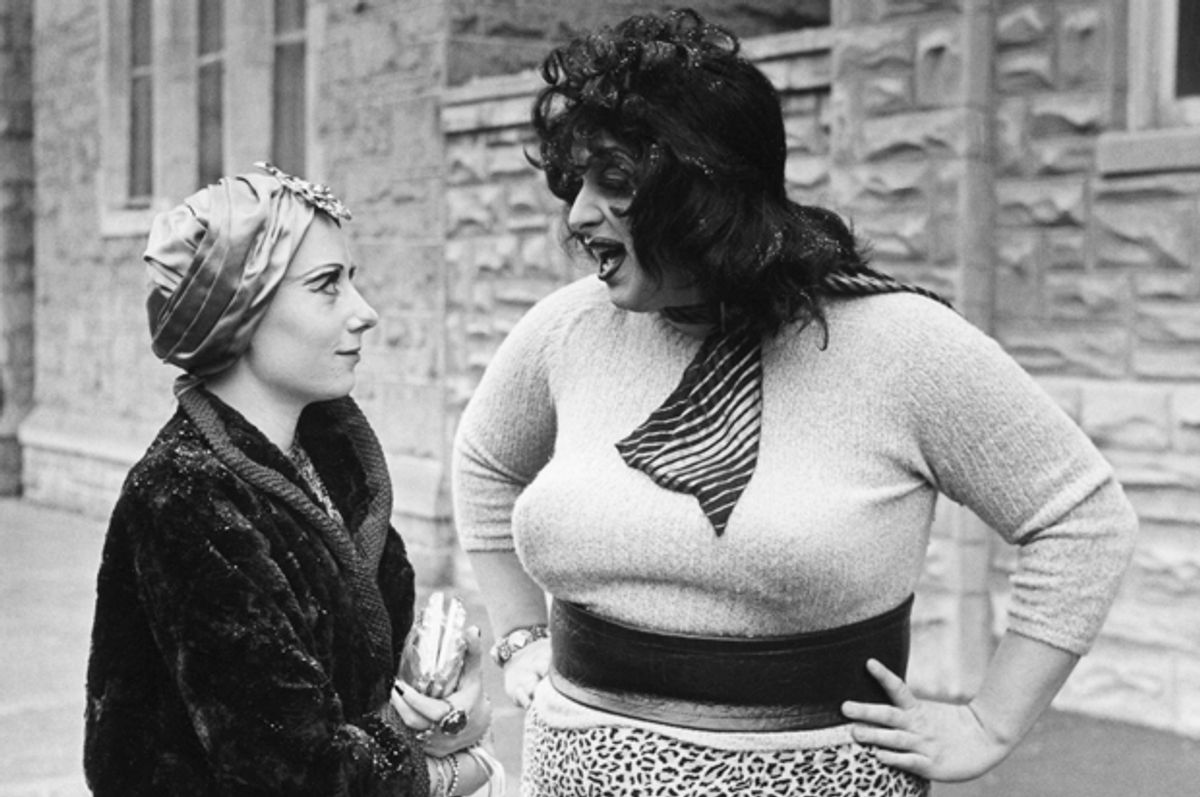 John Waters might have been outraged if anyone had told him in 1970 that “Multiple Maniacs,” the Baltimore underground filmmaker’s deliberately offensive (and often hilarious) second feature, was a political statement. It was intended as something else, surely; as an anti-political statement, or an announcement that all the politics of that contentious era were shallow and stupid. This is a movie in which suburban housewives are lured into a traveling freak show called the Cavalcade of Perversion, where they watch “actual queers” kissing and a man eating his own vomit, before they are robbed and murdered. It’s a movie in which the character called Divine, played by the real person of that name — who today would be called transgender but back then was described with less sensitive terminology — has a lesbian sexual encounter in a Catholic church and is later raped by a giant lobster.

But from a distance of 45-plus years, “Multiple Maniacs” is unmistakably a political statement, in much the same way as Mick Jagger was making a political statement that year when he told us that we all needed someone we could bleed on. (This is difficult to remember now — and difficult for younger people to believe at all, no doubt — but the Rolling Stones were once dangerous.) It was an attack on everything that passed for normality and decency in 1970, and also on the banal peace-and-love ethos of the hippie counterculture. “Violence was this generation’s sacrilege,” Waters wrote in his 1985 autobiography, “so I wanted to make a film that would glorify carnage and mayhem for laughs.” One member of the Maryland Board of Censors announced that the garbage was too good a place for Waters’ film, and a print exported to Canada was seized and destroyed. Those were the days!

But in suggesting that the film’s only point was shock value, Waters is either selling himself short or not being entirely honest, both of which should be typical. Witnessed from the perspective of the culture wars and gender debates of 2016, “Multiple Maniacs” feels like a manifesto for a form of radical consciousness that would not exist for decades, and that was almost immediately commercialized and commodified once it reached the surface of the culture. I can assure you that John Waters was not a viable commodity in the 1970s, and that he and his friends didn’t shoot this movie (on 16mm, in black-and-white) with any expectation of making money or getting famous.

There’s almost no way to exaggerate the level of difficulty, or the degree of self-isolation, involved in the 1970s trash-culture underground that Waters helped create. There was no Internet; there were no zines. You heard about Waters, eventually, if you read the Village Voice or the Berkeley Barb; if you knew people who listened to David Bowie and Alice Cooper and the Velvet Underground.

I found out about Waters’ movies sometime around the end of that decade, after he had begun to accumulate a following of misfits, renegades and social rejects in major cities all over the country. If memory serves, he was well known enough by 1980 that the Pacific Film Archive in Berkeley held a retrospective of his early work. But he had begun making films at the tail end of the ‘60s, several years before the punk movement emerged in New York and London — and he lived in Baltimore, then viewed as a cultural backwater that was 190 miles south of Manhattan and at least 15 years back in time. I was a big enough fan that Waters was at least part of the reason I attended Johns Hopkins in the ‘80s, and I’m still bitter about the fact that my scene as an extra in “Polyester” wound up on the cutting-room floor. (My brother, on the other hand, has an actual bit part in “Cry Baby,” alongside Johnny Depp.)

Waters had briefly attended New York University, but he didn’t respond to the Eurocentric pretentiousness of the New York art-film scene and went back home to Charm City. (He has said he was more inspired by “The Wizard of Oz” than by “Battleship Potemkin.”) He preceded David Lynch, Jim Jarmusch and Quentin Tarantino, and to a considerable extent his early films made their careers possible. His commercial and artistic aims were different, and he never aspired to the kind of auteurism or obsessive craftsmanship those three pursued. But it’s a mistake to view Waters’ movies as a series of random events or happy accidents. He wanted them to look that way, perhaps; he has joked that the new Janus Films restoration of “Multiple Maniacs” (now in theaters, and soon on home video) looks like “a bad John Cassavetes movie.” It doesn’t. It looks like a John Waters movie, which is to say it looks good and bad at the same time.

In his 1985 autobiography, Waters wrote that “Multiple Maniacs” remains his favorite among his movies, largely for its “meanness” and its “harsh documentary feeling.” I would go much further than that: Very few filmmakers this side of Luis Buñuel have been able to use amateur actors and sub-professional equipment to such liberating effect. It’s one thing to say that the homemade special effects and fumbled lines and broken-down cars and improvised locations are part of the point, but quite another to make it work. For the first 15 minutes, at least, “Multiple Maniacs” feels like an unwatchable mess. But by the time we get to Divine and Mink Stole in a church pew, finding imaginative uses for a rosary, this ludicrous tale of perversion and murder has developed its own rhythm and a sui generis sense of pathos.

Being far outside the cultural capitals of New York, Los Angeles and San Francisco was central to Waters’ art, and to his extraordinary ability to pivot from the grotesque to the absurd to the seemingly sincere. “Multiple Maniacs” features jokes about the Manson family and the Tate-LaBianca killings only months after they had happened, which was guaranteed to offend all possible viewers in 1970. With its violent climax involving National Guard troops and a band of fleeing hippie protesters, Waters mocks every possible perspective: right-wing supporters of the Vietnam War, the sanctimonious antiwar movement and the moralistic conclusion demanded of all action movies about rebellious antiheroes.

Let’s face it: In putting Divine on screen with a gun, and making her both a sexual rebel and a survivor of sexual assault (only one of them involving an oversize crustacean), Waters confronted taboos so untouchable in 1970 that almost no one had language to describe them — while assuring us it was all a joke. Whether the unexplained and disturbing apparition of “Lobstora” toward the end of “Multiple Maniacs” is designed to convince us that Divine’s character has lost her mind, or to remind us that the movie itself isn’t naturalistic and never meant to be, is a matter of interpretation. What’s beyond dispute is that this good-bad film is a landmark work of homegrown surrealism from one of America’s true cultural rebels, who shifted our consciousness in ways we’re only starting to appreciate.

”Multiple Maniacs” is now playing at the IFC Center in New York, with a limited national release and home video to follow.