Trump's economic speech: Lots of goodies for the rich, with a hearty dose of gaffes 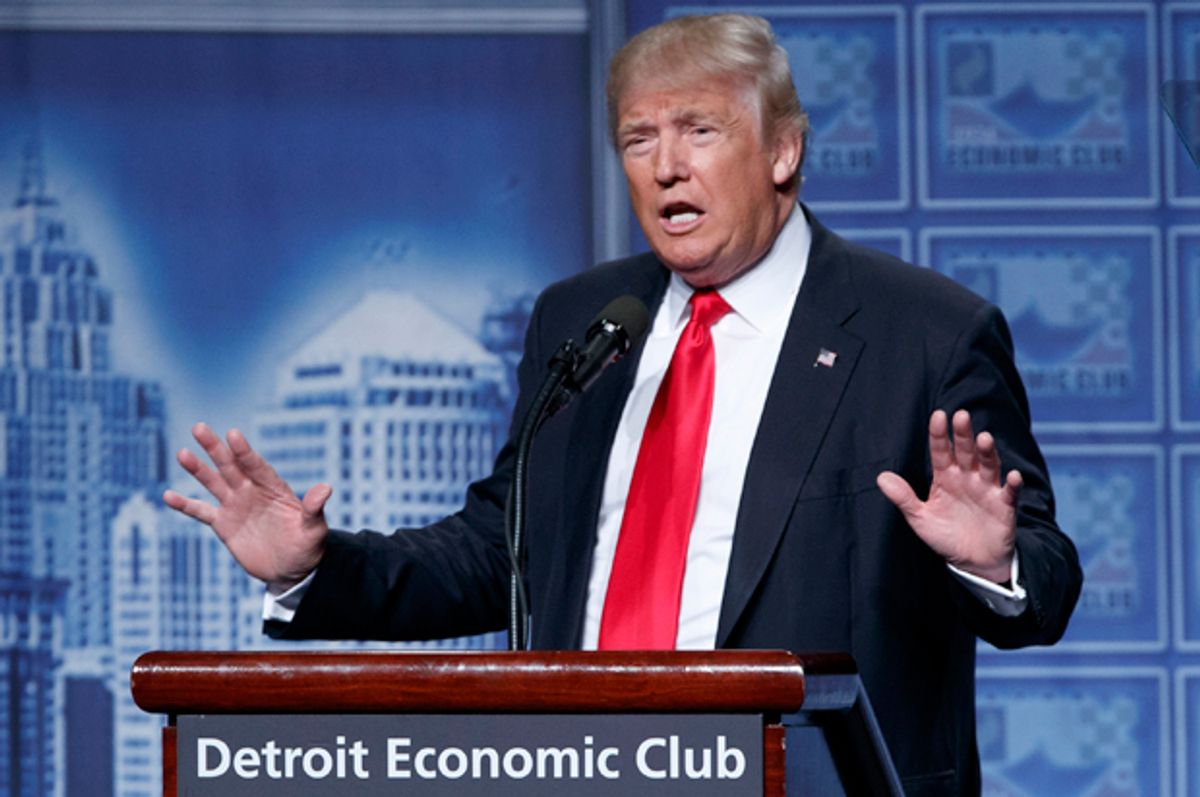 Whenever I think about what went wrong with Mitt Romney’s presidential campaign, I always come back to the fact that the candidate’s nominating convention was built around a gaffe. In mid-July of that year, Barack Obama was giving some remarks on infrastructure spending, and he said the words: “If you’ve got a business — you didn’t build that. Somebody else made that happen.” Romney and literally every Republican eagerly ripped the comment from its context and earnestly argued that the president of the United States had slagged every small business owner. Obama had actually been referring to the government services (education, roads, bridges) those businesses use to do business. It was a sloppy, transparently false attack that Republicans were hoping would come true by dint of incessant repetition, and Romney made it a focal point of his campaign.

I was reminded of that gaffe-centric flailing when watching Donald Trump’s big economic speech in Detroit on Monday. “Hillary Clinton short-circuited again, to use a now-famous term, when she accidentally told the truth and said that she wanted to raise taxes on the middle class,” Trump said in his speech, to much applause from the crowd. The Trump campaign has been hitting this hard over the past few days, trying to convince anyone who will listen that Hillary Clinton said out loud and in public that she intends to raise taxes on middle-class Americans. It’s insanely false and laughably pathetic.

The whole attack is based on a quick snippet of video from a speech Clinton gave in Nebraska, in which she sort of swallows the “t” in “aren’t” when saying “we aren’t going to raise taxes on the middle class.” Politifact contracted some vocal analysis to demonstrate that Hillary did in fact say “aren’t,” but even if she said “are,” the obvious explanation would have been a simple slip of the tongue. Indeed, Trump’s own attack allows that it was a slip-up by Clinton, but he imputes a nefarious “truth” to it for no other reason than it helps Trump. His campaign clearly believes that they have a “you didn’t build that” moment for the 2016 race, and they’re pushing it hard even though that moment didn’t work for Romney, and this “gaffe” improbably succeeds at being less credible than its predecessor.

Trump’s speech evoked Romneyism in other ways as well, primarily through its embrace of strategic policy revision and “pro-growth” economic policies that serve primarily to benefit rich people. Trump, you probably remember, proposed a massive and hugely irresponsible raft of tax cuts during the Republican primary that would have taken roughly $10 trillion in tax revenue for the government and redirected almost all of it to the upper rungs of the economic ladder. That plan has since been deleted from Trump’s website and replaced with the new Trump plan, which features less drastic (though still large) tax cuts for rich folks, including a complete repeal of the estate tax. “No family will have to pay the death tax,” Trump said, using the poll-tested Republican term for the estate tax. “American workers have paid taxes their whole lives, and they should not be taxed again at death – it’s just plain wrong. We will repeal it.”

The speech itself was full of some fantastically grandiose lies, but this is an especially important one. The estate tax does not fall on “American workers” who are being “taxed again at death.” It affects the heirs of the super-wealthy who will see chunks of their inheritances carved away by the government. In 2015, the threshold at which the estate tax kicked in was $5.43 million, and the percentage of estates that are actually affected is insanely low. Who benefits from eliminating this tax? “Nearly 85 percent of these taxable estates will come from the top 10 percent of income earners,” the Tax Policy Center notes, “and over 40 percent will come from the top 1 percent alone.” It’s a gift to rich people, plain and simple.

The primary political impact of this speech should be to permanently cure any misguided soul from ever using the term “populist” with connection to Donald Trump. He may grunt and snarl about renegotiating trade deals and bringing all the jobs back from China, but when he is actually forced to author economic policy proposals, they invariably redound to the benefit of the wealthy. Even the child-care policy he laid out this week is aimed primarily at rich people by making childcare expenses (which the wealthy pay more of) tax deductible.

That’s what Trump has to do to keep senior Republicans from abandoning his campaign en masse. He’s figured out that they’re willing to tolerate pretty high levels of overt racism and hyper-nationalist conspiracy theorism so long as they’re reassured that, at the end of the day, the wealthy will get their taxes cut. He'll give them just enough of Mitt Romney to help them forget he's Donald Trump.