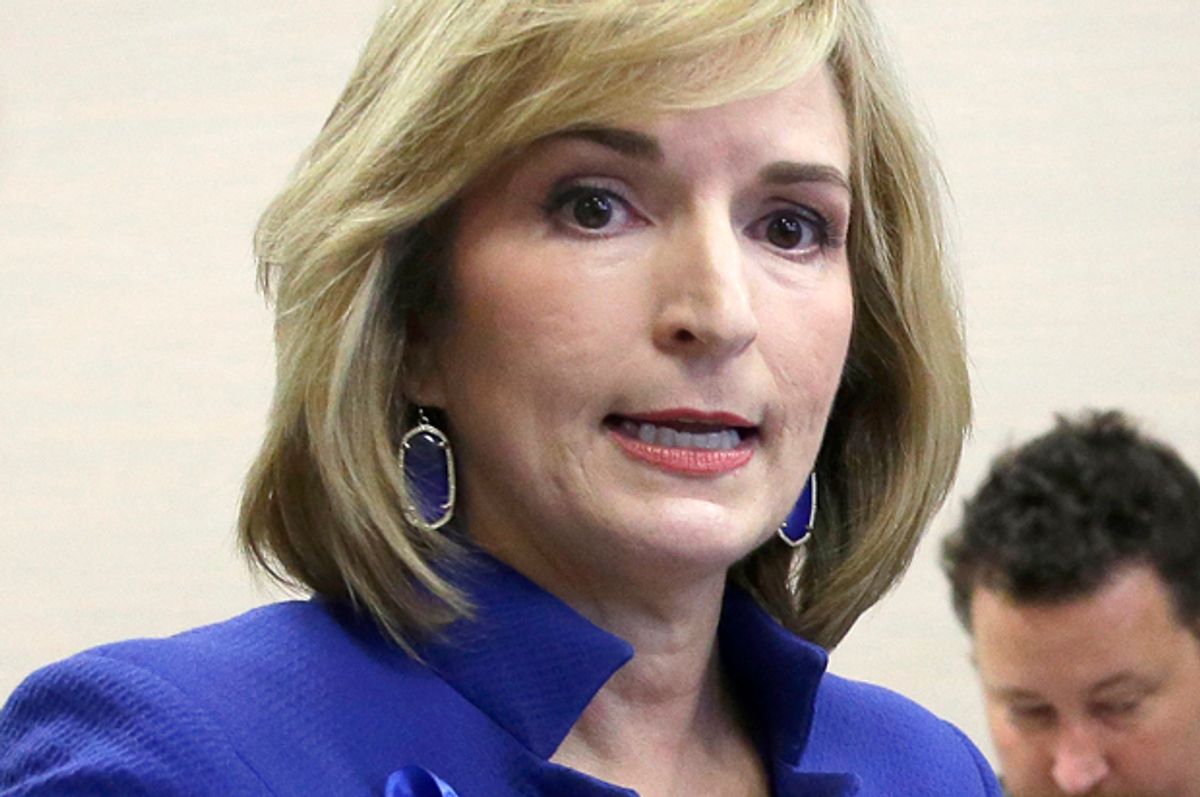 It’s been a tough few weeks for Devon Anderson, the district attorney for  Harris County in Texas.

Appointed to the position by Gov. Rick Perry,  Anderson began her term in September of 2013, following the death of her husband, who held the position until he succumbed to cancer in August of that year.

On Nov. 4, 2014, voters elected Anderson to continue in the role. She is up for reelection this November, and is currently facing a lawsuit for the unjust incarceration of a rape survivor in order to compel her testimony in a rape trial.

In July, Houston’s KPRC-TV reported on “Jane Doe,” a 25-year old rape survivor who was jailed after suffering an emotional breakdown as she testified in the trial of her rapist. The woman, who suffers from schizophrenia and bipolar disorder, spent 10 days in the hospital recovering from the emotional ordeal, and then, under a witness bond, was held in the Harris County Jail. Prosecutors led by Anderson say that Jane Doe was homeless at the time and was jailed to ensure that she would be available to testify again against the man charged with raping her.

Before any arguments about jailing the homeless woman instead of finding her safe accommodation at the taxpayer’s expense, we should note that it costs Harris County $75 per day, per person to house inmates. Surely, for that cost, accommodations could be found for a traumatized young woman in need of medical care. The young woman has filed a lawsuit for the civil rights violations she endured by being held in the jail’s general population, the same place the rape suspect was held, and where she says she suffered additional assault by other inmates and guards. Jane Doe’s mother fought for 27 days to get her daughter released from jail, and in that time her calls to the D.A.’s office went unanswered. Jane Doe’s attorney, Sean Buckley, disputes the claim that his client was homeless at the time she was incarcerated, telling investigative reporter Jace Larson that, “She has to know that is (a) false statement because her investigators were the ones who went there to pick Jane Doe up at her apartment and bring her to Houston to testify.”

In lieu of taking questions from the media and community, Devon Anderson took to YouTube to make her case. She looked into the camera and asked, “How were we to assume that a homeless, mentally ill victim of an aggravated sex assault would return to testify at the trial of her rapist when that victim was going through a life-threatening mental health crisis and had expressed her intention not to testify?” Is jailing the survivor the only solution that Anderson and her office can come up with? If that’s the best they can do, can they at least ensure that the survivor is safe while in their custody? Anderson looks right into the camera, points her finger and asserts, that “this was an extraordinary circumstance.” Yet last week, the ongoing investigation into the DA’s policies and conduct, concluded that another rape survivor was being held in jail so that Harris County prosecutors could ensure  she would testify against the man being charged with rape.

In this second case, the rape survivor was serving a six-month sentence in an unrelated drug-possession case, and was brought to the Harris County Jail to make it possible for her to testify in the case of her rapist. The term of her drug-possession sentence was completed during this time, but she was held in Harris County for an additional two months. Ms. Anderson had little to offer by way of explanation, saying, “We bench warranted her back from state jail to talk about rape case and while she was in jail her sentence expired and she ended up spending two extra months in the Harris County Jail that she shouldn’t have spent. We are looking into it.”

Stevens Orozco, a member of the local organization Truth2Power and one of the activists behind the#ByeDevon Campaign geared at ousting the D.A., told Salon that this is another in a long series of civil rights violations perpetrated by Anderson’s office. “People who weren’t paying attention before are paying attention now,” he said, highlighting a gang injunction issued by the D.A.’s office that would have prevented 46 black men from entering a 2-mile area in which many of them live. After facing pressure from activists and attorneys, Harris County dropped the injunction in June. The #ByeDevon campaign has a long and growing list of complaints against the D.A.’s office and is encouraging Harris County voters to remove her from office this fall.

Orozco says that their campaign, modeled after a similar campaign in Chicago to remove State's Attorney Anita Alvarez from office, is picking up momentum. There is a petition to call for Ms. Anderson’s resignation, reinvigorated by these recent stories of the incarceration of rape survivors.

This practice of compelling the testimony of survivors falls apart under the slightest scrutiny if the goal is to ensure the well-being of a person who has suffered the trauma of rape. Harris County Sheriff Ron Hickman, also up for reelection this fall, said the recent events “seemed like an unfortunate circumstance.” But Mr. Hickman’s hands aren’t exactly clean — he too is being sued by “Jane Doe” for his complicity in allowing her to be jailed and not advocating to have her held in the mental health unit of the jail instead of general population, where she was sent. Hickman is also under fire from community advocates for his role in this matter as well as his office’s practice of incarcerating those who cannot afford their bail fees.

Anderson expressed outrage about both incidents in her YouTube commentary and emphasized her commitment to prosecuting rapists. And yet, we know the abysmal rate at which rape is prosecuted. In a statement, Rebecca White, President of the Houston-area Women’s Center, said, “We appreciate the importance of doing all we can to hold perpetrators accountable, but also believe that respecting the dignity of survivors and providing full support are paramount.” Ms. White added that the group was “concerned that sexual assault is already underreported and that this may further deter survivors from coming forward.” Out of every 1,000 rapes, only 344 are reported to the police. Of those 344, 63 lead to arrest, 13 get referred to prosecutors, 7 lead to a felony conviction, and 6 are incarcerated. Of every 1,000 rapes, 6 result in incarceration.

Let’s take a moment to imagine what might happen to those rates of reporting if we begin to incarcerate the survivors. The National Violence Against Women Survey found that survivors listed, among many reasons for not reporting their rape to the police, fear of retaliation from the rapist; shame and embarrassment; believing that the rape isn’t a major enough incident to warrant police involvement, and worry that prosecutors and police would question their veracity and credibility. Among survivors of color, there is a deep-seated mistrust of police that results in even lower rates of reporting. The same is true of those survivors experiencing mental health issues. What might happen to these incredibly low rates of reporting and confidence in the criminal justice system if we allow this kind of treatment of survivors to go unpunished?

Who will survivors of rape feel safe turning to? Certainly, it seems that Harris County D.A. Devon Anderson is not in the number.