"African Americans accounted for 91 percent of the 1,800 people charged solely with 'failure to obey'" 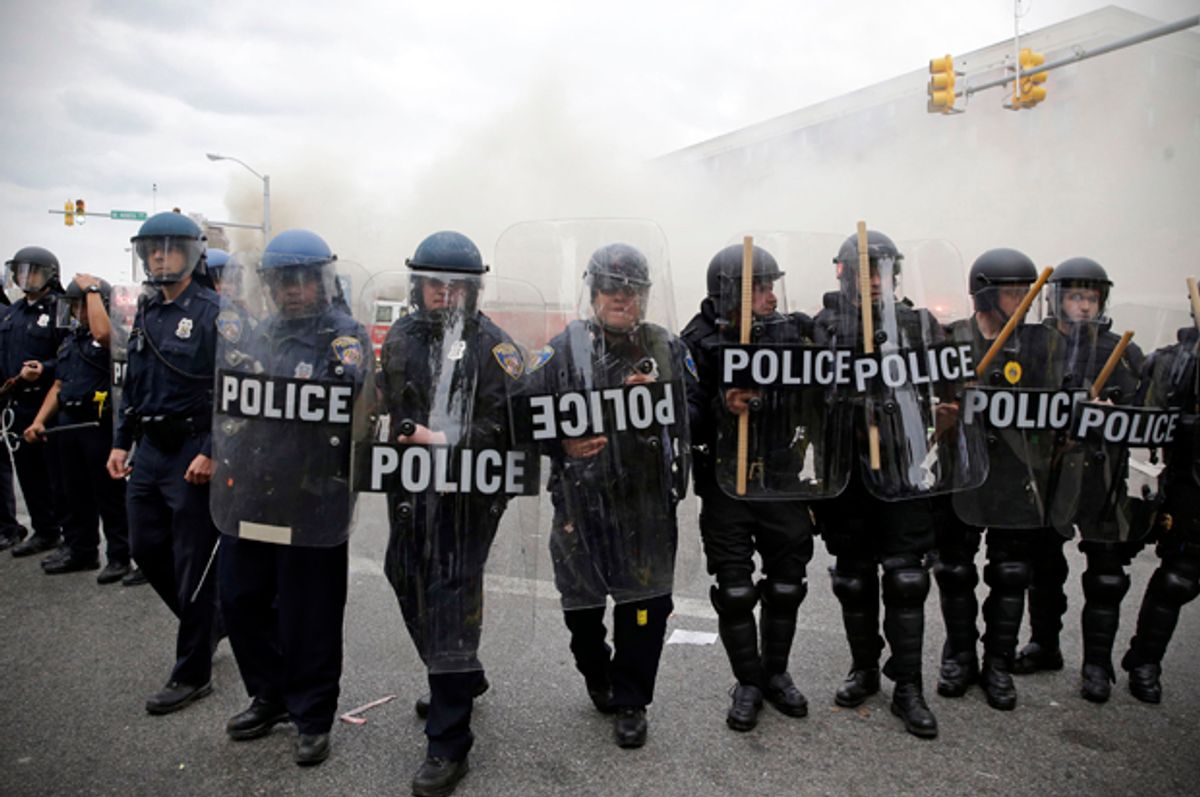 Wednesday morning, the Department of Justice officially released its investigation into the Baltimore Police Department. The report paints a damning portrait of the state of policing in the city and contains statistic after statistic backing up what groups like Black Lives Matter have been saying all along.

The report includes more than a few stats that unequivocally show just how biased and racist the police department is:

BPD made roughly 44 percent of its stops in two small, predominantly African-American districts that contain only 11 percent of the City’s population. Consequently, hundreds of individuals—nearly all of them African American—were stopped on at least 10 separate occasions from 2010– 2015. Indeed, seven African-American men were stopped more than 30 times during this period ...

Of those arrested for things like loitering and trespassing, the arrested person was often not warned that they were engaged in unlawful activity — as is required by the Constitution.

While the Constitution requires individuals to receive pre-arrest notice of the specific conduct prohibited as loitering or trespassing, BPD officers approach individuals standing lawfully on sidewalks in front of public housing complexes or private businesses and arrest them unless the individuals are able to “justify” their presence to the officers’ satisfaction.

Effectively, police have been presuming guilt, rather than innocence.

Baltimore has one of the highest violent crime rates in the nation, and the police department was attempting to use all those loitering arrests to curb the violent crime rate, also known as broken windows policing.

A current BPD sergeant recently endorsed this approach to policing, posting on Facebook that the “solution to the murder rate is easy. Flex cuffs and a line at [Central Booking]. CJIS code 2-0055.” CJIS 2-0055 is the offense code entered for loitering arrests.

One of the main talking points of BLM has been that when police are involved in incidents with whites, they manage to deescalate the situation, but when blacks are involved, they do the opposite. This, too, was confirmed by the report: "Officers frequently resort to physical force when a subject does not immediately respond to verbal commands, even where the subject poses no imminent threat to the officer or others."

Perhaps one of the most shocking things in the report is the frequency with which the BPD conducts strip searches.

Strip and cavity searches are commonly understood as "degrading" which means police officers have to have extra cause to conduct one, and as such, strip searches "are never permissible as part of a pre-arrest weapons frisk," and "courts have 'repeatedly emphasized the necessity of conducting a strip search in private.'"

The DOJ's investigation found "BPD officers frequently ignore these requirements and strip-search individuals prior to arrest, in public view, or both." In one example, a woman was stopped for a broken tail-light. The officers ordered her out of the car, onto the sidewalk, and to strip:

The mayor of Baltimore, Stephanie Rawlings-Blake, made it clear that the city was already working on solutions, and has been for some time.

"We have not been standing still while this inquiry was underway," she said. "Much remains to be done. Change will not happen overnight. But our efforts have started the necessary process of change. They re-affirm this City’s commitment to a Police Department that both protects our citizens and respects their rights."