Exclusive interview with Palestinian poet Dareen Tatour from her home, where she remains under house arrest 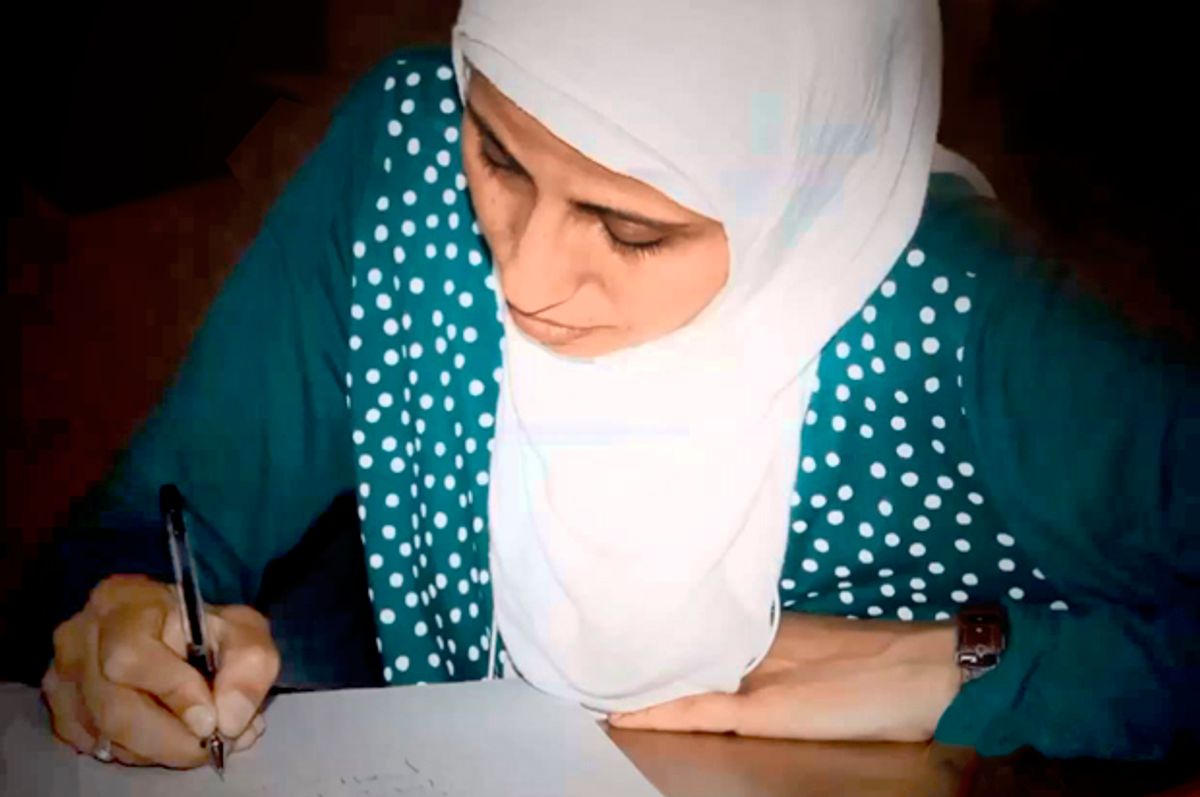 Dareen Tatour, a Palestinian citizen of Israel, was arrested because of her posts on social media.

In October, police raided her home in the middle of the night. They handcuffed Tatour, a 35-year-old poet, and took her away.

"You look like a terrorist," an interrogator told her. The Israeli government accused Tatour of inciting violence with her poetry and Facebook posts.

She faces up to eight years in prison, if convicted on all charges. Her case is still pending, and the trial will resume on Sep. 6.

Tatour has already spent three months in Israeli prisons, and another six months under house arrest in an apartment near Tel Aviv, which her family was forced to pay for.

In late July, an Israeli judge ruled that she can continue her house arrest in her family's home near Nazareth.

Since then, more than 7,000 people have signed the letter, and activists have created an international solidarity campaign in support of Tatour.

Tatour's story is one of many. From October 2015 to July 2016, the Israeli government arrested roughly 400 Palestinians for social media posts, according to local rights groups.

Yet her case has gotten particular international attention, given its chilling implications for civil rights for Palestinians in Israel, the U.S. government's closest ally.

U.S. social justice group Jewish Voice for Peace recently published a video message featuring Tatour in her home in Reineh, an Israeli city near Nazareth, where she remains under house arrest.

Salon organized an interview with Tatour. The interview was conducted in person, in Arabic, and translated with the help of Yoav Haifawi, an activist who runs the Free Haifa blog, where he posts updates on Tatour's case.

Can you explain what has happened since your arrest and imprisonment?

I’m still detained and pending trial, since they burst in at 3:30 am on Oct. 11, 2015. A large police force raided our house, and asked my parents to call me, because they came to take me. They did not have an arrest warrant, violating the most basic laws.

After my interrogation they decided to put me on trial and to hold me in prison until the end of the trial. I can say that the interrogation and the trial are a farce and a shame for any system that claims to be democratic.

Initially I was jailed for three months, during which I was transferred between three prisons: Jalameh, Sharon and Damon.

Later, the court put me under house arrest in the Tel Aviv area, and this meant I was in exile far away from my town. I stayed there for over six months, during which I was prevented from going out and from communicating over the internet at all times, day and night.

Then, in the wake of the mounting solidarity campaign protesting the undemocratic practices against me, I was transferred to the house arrest in my town, Reineh. Here, I'm not allowed to go out, except for just six hours per week, and they're making me wear an unremovable electronic bracelet on my ankle to monitor my movements.

What were the conditions like in the prisons? Can you talk about your experience and the other Palestinian prisoners?

First, there are thousands of Palestinian prisoners serving sentences in Israeli jails, and among them women and children — in addition to administrative detainees, who are being held by Israel without charge, and of course without trial, for an unknown period, because, according to the emergency laws, administrative detention can be extended repeatedly with no limit.

When I was in prison I was with Palestinian women prisoners. I experienced the suffering of the Palestinian prisoners in all humanitarian aspects. I witnessed the neglect they suffer in Israeli jails, in terms of environmental and health conditions, and cruel treatment.

The prisoners in general, and especially women prisoners, are deprived of basic human rights, and I mean especially the right to receive proper medical treatment.

Israeli prisons are full of injustice; whatever I say will not be enough to describe the life of Palestinian prisoners there. I met there innocent women prisoners who didn’t commit any crime.

For example, I was arrested because of a poem, and I met a girl who was detained because she wrote a private letter to her sister about personal and family concerns, and because she said the word "suicide," she was thrown in jail for three months.

Why do you think Israel is going after poets and other artists, and arresting Palestinians for social media posts?

The political persecution, detentions and restrictions on freedom of expression, in my opinion, are a symptom of the crisis of Israel. As the Zionist authorities intensify repression and step up their incitement campaigns against Palestinians, they feel more weakness and impotence.

On the one hand the Palestinians increasingly reject their colonial practices and racial oppression; on the other hand, as a response to the emerging culture of hatred at the popular level, an opposing anti-fascist stream is taking shape in Israeli society. This puts Israel in a dilemma, forcing it to step up its repression, thus exposing the Israeli regime as anti-democratic.

Is it hypocritical for Israel to insist it is a democracy while it arrests people who criticize it?

Of course it is. Israel is not a democratic state. To the extent that it is democratic, its democracy applies only to one category of people, of citizens — that is, it is only democracy for Jews. For this reason I call it sectarian democracy or fake or hypocritical democracy.

However, even this kind of democracy started collapsing recently, as I explained in the previous answer.

Do you know if the letter from the 250 literary figures helped improve your situation?

Yes, of course. The solidarity campaign, including the petition, which was signed by many artists, writers and people from all over the world, helped very much.

In the beginning the conditions of my detention were very harsh. I was detained for several months in a house near Tel Aviv, away from my family and the place where I used to live. I was completely isolated from people; I was prevented from leaving the house altogether. It was more like a detention in solitary isolation cell in exile. It continued like this for more than six months.

Before the escalation of the solidarity campaign, my lawyer filed a request to transfer my home detention from Tel Aviv to Reineh — my town — but the prosecution strongly objected, refusing even to let my request be heard in court.

However, after the publication of the petition, it changed its attitude to the request, and eventually approved. My return from Tel Aviv to house arrest in Reineh greatly alleviated the conditions of my detention.

Do you think that continuing public pressure may influence the final verdict in your case?

Yes, definitely, the public response to the call for solidarity in my case, and around the issue of freedom of expression in general, is the only effective pressure that may change this unfortunate situation.

I believe that public pressure may force the Israeli authorities to reconsider the persecution of Palestinian artists, writers and young activists just because they express their rejection of oppression.

What gives you hope?

Hope is the foundation of life. There is a saying that I used to repeat before my arrest, and I still say it: "We dream in order to continue living." Here I compare dreams with hope, because without hope we are going to die even as we are alive, and only our bodies will remain.

Hope is the sense of life, of freedom, of safety. It is what gives meaning to everything experienced by humans; we breathe hope to live meaningful lives.

What can human rights activists in the U.S. and elsewhere do to help fight for your rights and the rights of other Palestinians?

The U.S. government is the world's biggest supporter of Israel. Activists in American society can put pressure on Israel in order to shed light on the issue of freedom of expression and the harassment by the Israeli authorities against those who oppose their views.

Palestinian Arab people in Israel are facing campaign of racist incitement, on both official and popular levels. Attacks on them multiply just because they speak Arabic in public places. These are dangerous developments. In this regard, I believe human rights activists should sound the alarm before it is too late.