The Bay Area is home to a wildly creative culinary boom — and wildly skyrocketing prices. 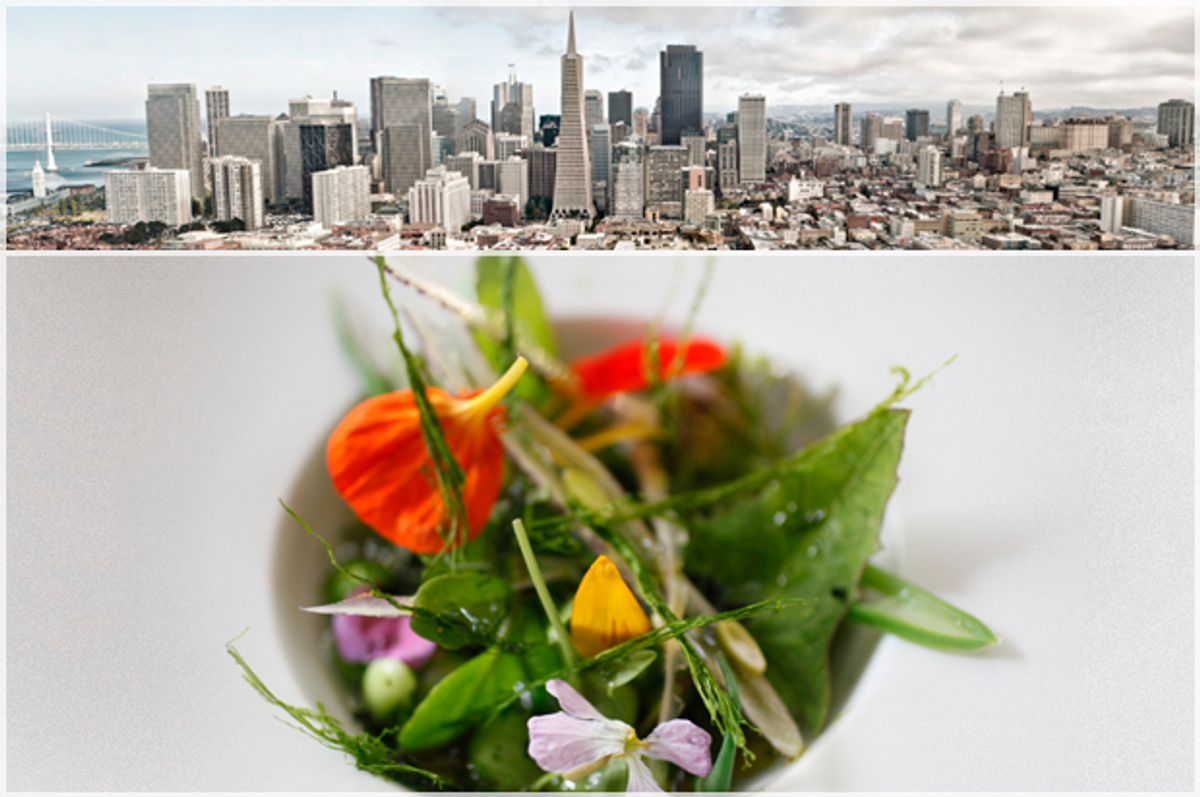 San Francisco skyline; a dish of foraged foods made by Josh Skenes at Saison. (Andrey Bayda via Shutterstock/AP/Eric Risberg)
--

Earlier this year, payment processing company FirstData released their SpendTrend Restaurant report, which revealed that San Francisco's dining scene is outpacing New York City's, not only in terms of new establishments, but also in number of transactions and average price. While the City by the Bay is still loyal to it’s hyperlocal, seasonal, farm-to-table roots, it seems to have recently become unshackled by high-end earnestness and graduated to restaurants that serve up the kind of creativity seen in start-up culture. Restaurants like Benu, Manresa, and Saison are racking up Michelin stars and attracting crowds with inventive cuisine that's more Alice in Wonderland than Alice Waters (think thousand-year-old quail eggs, sesame leaf ice cream, cheese candles and smoked quail with nasturtium). Last year, Bon Appetit even hailed San Francisco as “the best food city in America right now.”

You would think the city's residents would be dancing around the ares's dining rooms, taking a culinary victory lap. You would be wrong.

The problem is, they can only take advantage of this cutting-edge culinary scene if they can afford it. An op-Ed in the New York Times this weekend examined how newly minted tech millionaires are influencing restaurant prices in the Bay Area, and it’s not pretty. The influx of deep-pocket patrons is driving prices up to astronomical levels (this, in a city where real estate prices are already amongst the highest in the country, with average rent for a one bedroom around $3,000). And that clientele is clamoring for constant innovation or “concept” restaurants that capitalize on trends, forcing chefs to steer their careers towards becoming on-demand chefs for big tech companies' “all day bacon and lobster roll and taco crowd,” as Gwyneth Borden of the Golden Gate Restaurant Association noted. “These restaurants must satisfy a venture-capital and post-I.P.O crowd, for whom a $400 dinner does not qualify as conspicuous consumption,” wrote former food critic Daniel Duane, before lamenting a dinner that set he and his dining companions back $1,200.

Such experiences are increasingly common in a city heavy on the tasting menu. A meal for two at a buzzy eatery like Saison will set you back over a thousand dollars, while Atelier Crenn will leave your wallet a mere $960 lighter (of course, you’ll be full of chef Dominique Crenn’s poetry-inspired French cuisine, so it might be worth it).

It’s not only Zuckerberg wannabes who are causing this price surge, however. In addition to real estate costs, San Francisco’s minimum wage has also been steadily increasing since last year and will reach $15 an hour by 2018. The recent trend of banning tipping has also inspired many Bay Area restaurants to establish a “service fee” that will often run as high as 20%. Alice Waters' Berkeley mainstay Chez Panisse raised eyebrows when customers learned that there was a 17% service fee added to their bills and not a penny of it went directly into servers pockets (the restaurant has said that the money goes to a general fund meant to help employees though programs like paid vacation and health care). Now some early adopters are abandoning the tipless dining policy.

Still, nothing seems to be slowing the rising prices. In a never ending sea of start-up boy kings and starry eyed angel investors, the reservation books for high-end restaurants are continually full and mid-level establishments are succumbing to the mounting financial pressures — and eroding an important part of the culinary scene. According to Eater SF, 39 San Francisco restaurants closed this Spring alone, including the popular Nob Hill Grille and buzzy mid-century inspired Cadence. Time will tell if the restaurant bubble will inspire a Google bus-like backlash, but in the meantime, there’s always The Chairman, the Mao-themed food truck where a line of faithful frugal foodies wraps around the block, waiting for Steamed Pork Belly Bao that costs about $5 apiece — for now.