Donald Trump isn’t just a bloviating fraud, he might truly be physically unfit to be president 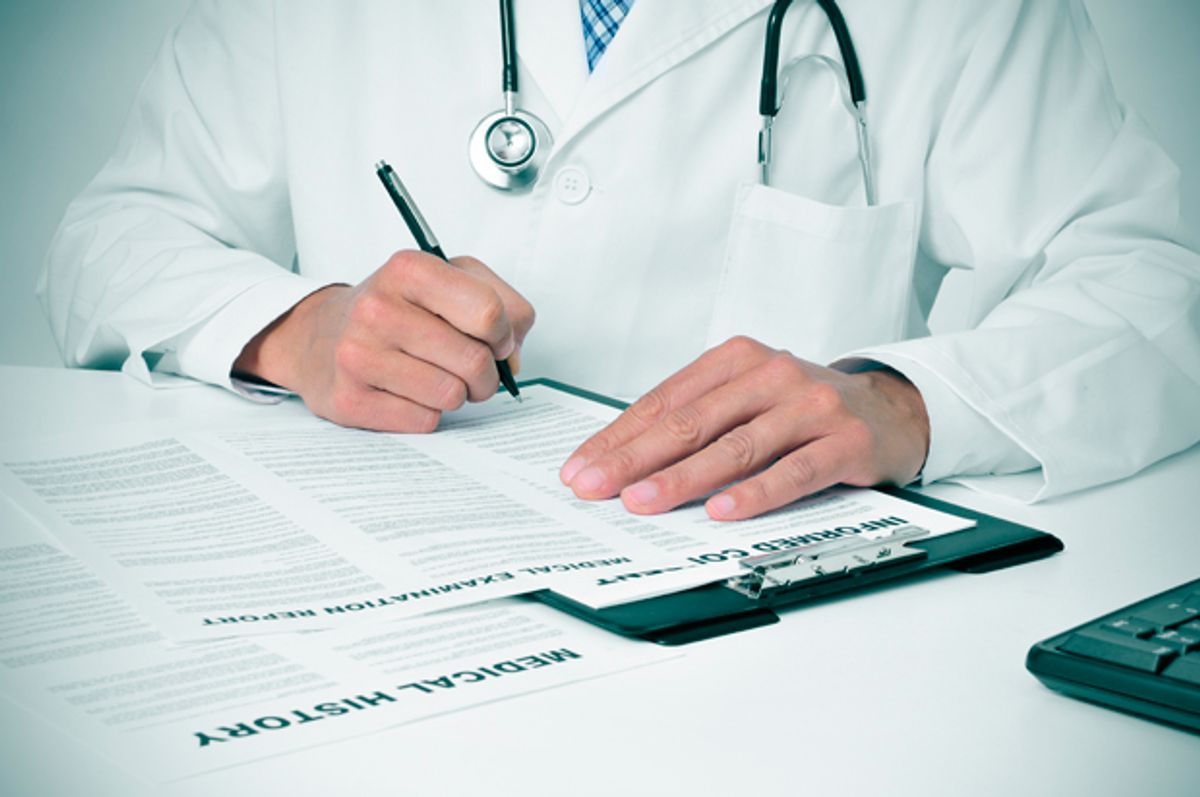 In the latest twist on the weirdest campaign ever, Donald Trump seems to have encouraged supporters to kill Hillary Clinton.  Trump said, "By the way, if she gets to pick her judges, nothing you can do folks. Although, the Second Amendment people maybe there is. I don't know."  Of course in the immediate aftermath of the loony homicidal comment, the Trump campaign is now saying that the "dishonest media" is misreading his claim.  That might hold water if it weren't actually the second time that his campaign has supported killing Trump's competition in the last month.

This latest attack also comes on the heels of  Trump's crack at Clinton's mental state last week in a rally in New Hampshire. "She is a totally unhinged person. She's unbalanced. And all you have to do is watch her, see her, read about her.  She will cause — if she wins, which hopefully she won't — the destruction of our country from within."  If you didn't know better, you'd think he was talking about himself.

Trump has spent his whole campaign attacking his competition. Name-calling, insulting, and bullying have been campaign staples.  But calling Clinton "unbalanced" is more than a simple tactic; it is a strategy that reverses one of the most pointed attacks on Trump—whether or not he might be well enough to serve and whether or not his limited mental capacity might lead to the destruction, not just of our country, but of the entire planet.

There has been a recent flurry of news media coverage that has focused on whether or not Trump might not be well, whether he might suffer from dementia or Alzheimer's, and whether or not his thin skin and uncontrollable temper might be a problem for a president. Even more disturbing we learned of his inability to understand why we should not nuke Europe.  Then--after all that--we get the frightening and unhinged 2nd Amendment comment. Clearly we have reason to question whether or not he has the ability to do the job.

Anticipating that concern, Trump released a letter from his physician back in December attesting that"if elected, Mr. Trump, I can state unequivocally, will be the healthiest individual ever elected to the presidency." When the letter was first released many laughed it off.  It seemed like yet another sign of a bombastic and surreal campaign.  But now that we are only months away from the general election it is time to return to that letter and wonder if it is further proof that Trump is scamming the US public.

Experts have mixed opinions on whether or not candidates should be required to release medical records.  Does a candidate have an expectation of privacy or does the public have the right to know about the health of their president? According to CNN, "In 2008, a high-profile panel of doctors recommended that presidential and vice-presidential candidates be required to undergo a health exam by an independent team of doctors from the American College of Physicians." That effort failed, though, when it became clear that such a practice would become immediately politicized.

So, even though we require physicals of pilots, it is still not a requirement that a candidate for president release a full medical report.

That means Trump's letter was optional, which makes it even more odd, given the fact that he isn't interested in voluntarily releasing his tax returns.  What could have been the motivation for releasing what may well be the weirdest medical report in the history of presidential elections?

The letter does not uphold even the flimsiest medical standard and it uses hyperbolic language that has no connection at all to facts.  Aside from making the outrageous and completely unverifiable claim that Trump would be the healthiest president ever, it makes other odd statements.  We read, for instance, that he has had a medical exam that revealed "only positive results." In the medical community a "positive result" means a bad prognosis. What we want are "normal" results.   The letter uses the word "excellent" twice in relation to medical tests—another oddity since again the standard would be to say "normal."  The letter also states that Trump's only medical issue was an appendectomy but there is no mention of the bone spur, which kept him from serving in Viet Nam.

Apart from the lack of scientific rigor, the letter starts with "To Whom My Concern." It is worth pausing to worry that the physician who has been taking care of Trump since 1980 has such a poor command of the English language. In fact, the language in the letter mirrors the same sort of bombastic language common to Trump-speak. The writing was so bizarre that it led Robert Reich to wonder if it had been written by Trump himself.

So who exactly is the doctor that signed this letter? Well, as if the letter weren't strange enough,Trump's post on Facebook said it had been "written by the highly respected Dr. Jacob Bornstein of Lenox Hill Hospital." But, Trump can't even seem to get the name of his physician right, since the letter states it was written by Jacob's son, Dr. Harold Bornstein who took over care for Trump after his father retired.

Bornstein junior is a gastroenterologist, hardly the sort of specialty designed to offer a comprehensive overview of a patient's health.  The irony that Trump's bill of good health comes from a doctor who specializes in the gastrointestinal tract should not be missed.  Recall that when Stephen Colbert introduced "Trumpiness" to his viewers while covering the RNC, he explained that "Trumpiness" was a lot like "Truthiness"—except that rather than describe truth coming from the gut, "Trumpiness" comes from lower down the digestive track.  If Trump gets all of his ideas from his bowels, then maybe a gastroenterologist is exactly the sort of doctor he needs.

But all kidding aside, Bornstein's specialty simply doesn't qualify him to speak of the fitness of Trump overall.  He attests to facets of Trump's health that are well outside of his area of expertise.  Even more bizarre, since the letter went public, Bornstein has stayed mostly under the radar. His websitehas been pulled down.  And his Facebook account is mostly inactive.

If you want to check out the doctor, your best shot is this wacky profile picture.  There were also lots of memes produced after the letter surfaced. Even The Daily Show did a funny bit on it.

It all makes for a good laugh, but the time for joking about Trump is over.  While his tax returns might give us a glimpse into the reality of his business practices, his medical letter may be even more revealing.  It was optional to release it, but now that it is in the public domain we have a right to question it. It is blatantly obvious that it isn't fully accurate. Now it is worth wondering if any of it is true.

Imagine if the media decided that this letter was as important to investigate as just one of Clinton's emails.  Until they do, we can only guess which of the two candidates is the most "unbalanced."