Capitalizing on stupidity: Today, Trump called Obama a terrorist — something he's been doing quietly since 2011 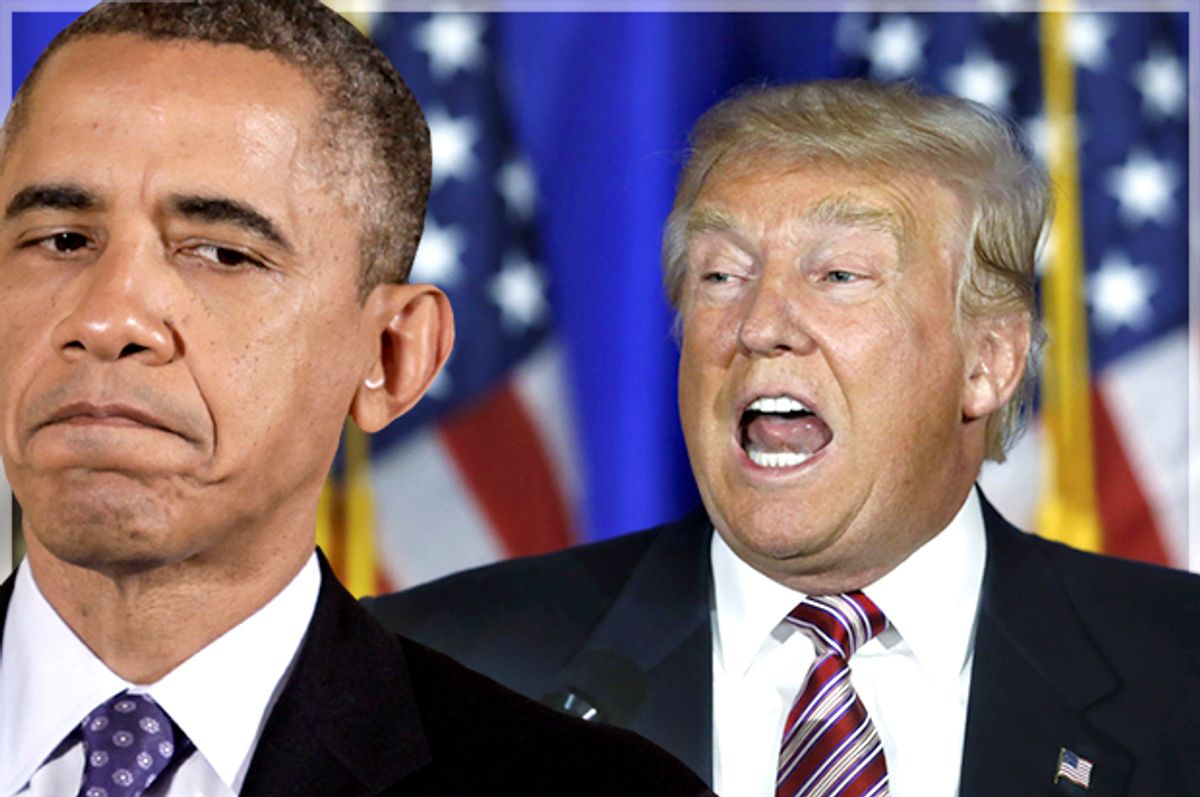 Donald Trump has transgressed political norms without consequence for most of his campaign. He appeared to have crossed a line, however, with his attacks on the Khan family two weeks ago. Suddenly, fence-sitting Republicans like Sen. Susan Collins and Rep. Adam Kinzinger decided to abandon ship. Even Trump supporters like Newt Gingrich fumbled for defenses of his behavior.

It was sufficiently bad that the Trump campaign began pushing rumors about an imminent “pivot.” Trump was finally ready to get serious and feign decency. To prove it, he read from hand-held scripts at rallies last weekend, hoping to assuage panicked Republicans. Then he gave a conventional speech on the economy at the Detroit Economic Club. For 72 hours, Trump was almost a normal candidate.

But on Tuesday, less than 24 hours after his latest pivot, Trump returned to form with his most revolting gaffe thus far. At a rally in North Carolina, he drifted off script and joked about the political murder of his opponent, Hillary Clinton. “If she gets to pick her judges, nothing you can do, folks,” he said casually. As the crowd obediently booed, he added: “Although the Second Amendment people – maybe there is, I don't know.” There's no point in debating the implication here – it's obvious.

On Wednesday night, Trump continued his non-pivot pivot with a rambling, incoherent speech in Fort Lauderdale. The highlight of the evening consisted in Trump calling the President of the United States a terrorist. “In many respects, you know, they honor President Obama,” Trump said. “ISIS is honoring President Obama. He's the founder of ISIS. He founded ISIS. And I would say the co-founder would be Crooked Hillary Clinton.”

The allusion to political assassination was genuinely shocking, even by Trump's abysmal standards, but what he said on Wednesday, while grotesque and false, was anything but surprising. In fact, implying that President Obama is a terrorist is essentially the first thing Trump did as a presidential candidate.

In 2011, Trump lunged into the political arena by aligning himself with the birther movement. Birtherism is an inescapably racist theory; there's no reason to believe it apart from bigotry. It springs from a nativist fear of a black president with a Muslim name who represents cultural progress. This was Trump's “original sin,” as James Carville put it in an April column for Media Matters, and it's been obscured by all the terrible things he's said and done since.

It's hard to overstate how extraordinary it is that the GOP nominated a birther for president. These are people who reject the legitimacy of our first African-American president, precisely because he's African-American. This is Trump's chosen base, and he owes his political existence to their allegiance. It's why he's been dog-whistling to white nationalists since he started campaigning. His supporters internalized the signal he sent in 2011 and they were with him the moment he descended that escalator at Trump Tower.

To review, the birthers contend that Obama is a secret Muslim Manchurian candidate who, it turns out, was born in Kenya, not Hawaii. This is really just another way of calling the president a terrorist, is it not? Indeed, one can – and should – draw a straight line between Trump's birtherism and his insinuation that Obama is the founder of the world's largest terrorist organization.

Whether Trump believes this lunacy is irrelevant. He knows his audience is disposed to believe it (Obama's a Muslim Manchurian candidate, after all) and so its a piece of red meat to toss about at a rally. That's what Trump was up to in Fort Lauderdale. This wasn't an argument about Iraq or Obama's decision to draw down troops., as Trump insists. He has already laid the blame for ISIS right where it belongs. Here's what he said during one of the early GOP primary debates:

“The war in Iraq was a big, fat mistake, all right?...The war in Iraq, we spent $2 trillion, thousands of lives, we don't even have it. Iran is taking over Iraq with the second-largest oil reserves in the world...So George Bush made a mistake. We can make mistake. But that one was a beauty. We should've never been in Iraq. We have destabilized the Middle East.”

This is the most accurate statement Trump has made as a candidate. Bush invaded Iraq without a plan, not Obama. Bush disbanded the Iraqi army and imprisoned the very people who later created ISIS, not Obama. Bush “destabilized the Middle East,” not Obama. The man who made the above statement knows who dug the hole out of which ISIS crawled. What Trump said on Wednesday night, therefore, was not about Iraq. It was a reference to Obama's subversive otherness, something to which his core supporters are uniquely attuned. This is what Trump has been doing since 2011; we're all just used to it by now.

Trump's greatest achievement in this campaign is how effectively he's normalized abnormal behavior. That he began his campaign by self-identifying as a birther and almost no one remembers it is a testament to his strategy. By being so relentlessly crude and dishonest, he's made the extreme appear banal. It's a kind of political shock and awe: overwhelm opponents and media with lies and vulgarities until it becomes impossible to distinguish truth from fiction, sane from insane.

If any other candidate said what Trump said this week, his campaign would collapse immediately. But Trump has been saying and doing things that would disqualify anyone else for months, and yet he slithers on. The cumulative effect of the last few weeks seem to have damaged him in ways previously unseen, but his political experiment should've ended five years ago when he climbed in bed with crackpot conspiracy theorists.