Don't worry about Paul Ryan: He's in an awful spot thanks to Trump, but he will come out just fine — as he always does

The GOP has been imploding for months, but somehow Paul Ryan always escapes unscathed 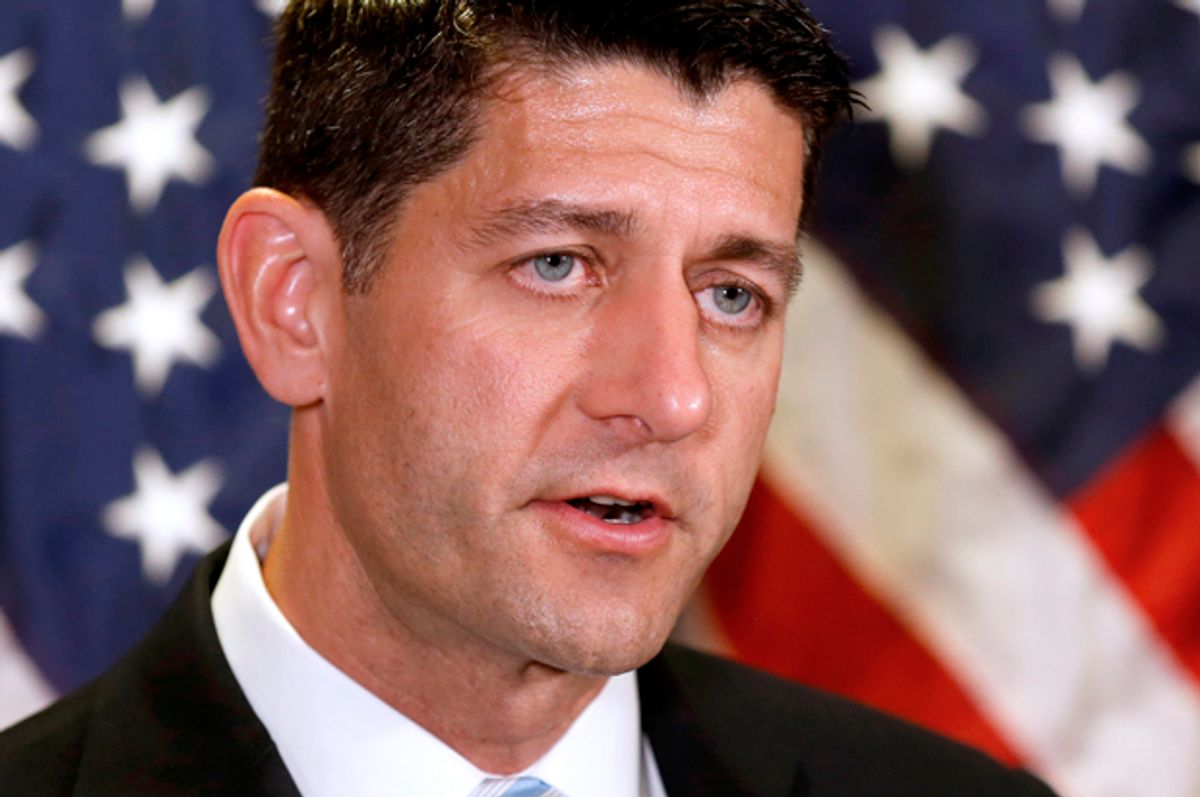 To hear some observers tell it, Paul Ryan’s primary victory on Tuesday night is a case of winning a battle while losing the war.

First, the battle. Ryan crushed his challenger, a chunk of raw red meat named Paul Nehlen, a tattooed and glowering local business owner who has called for deporting Muslims and, he was very proud to tell everyone, rides a Harley. (Hey, it worked for Wisconsin governor Scott Walker.) Nehlen ran as a sort of mini-Donald Trump. In the end, though, he had much less success. Ryan banked 84 percent of the vote to his challenger’s 16 percent.

In the aftermath, there was some concern-trolling that Ryan was actually a weak candidate, as demonstrated by the fact that he had to actually do some campaigning in the last few weeks. A Speaker of the House rarely faces a primary challenge, but Ryan spent the last few weeks putting out campaign ads and chatting with local talk radio hosts.

Were it not for the populist energy that has driven Trump’s success, the argument goes, none of that would have been necessary. But the revolt of the GOP base, which helped a hard-right challenger knock off Ryan’s former colleague Eric Cantor in a primary two years ago, meant Ryan couldn’t take any chances. Especially since conservatives brought the big guns like Ann Coulter and Michelle Malkin to Wisconsin to campaign for Nehlen.

Which leads to the argument that Ryan is losing the war between his brand of traditional conservatism and the Trumpism that has split the GOP this year. The Washington Post called him a “relic caught in a populist storm.” The Nation labeled him the GOP’s “tarnished golden boy.” Vanity Fair warned a couple of days before the election that if Nehlen could just put a dent in Ryan, the GOP should view it as a warning. (One could argue the GOP is well past the point of warnings on the national level.)

And those were the vaguely positive takes. The right-wing media was much less kind, especially the Trump fan boys at Breitbart, who did everything but shower Ryan with cries of “cuck” while making him out to be on the wrong side of history by opposing Trump and the new populism.

To be fair to Ryan, he is in a tough spot. As the Speaker of the House and leader of the GOP’s caucus there, he wants to at the very least limit the losses of his big majority this fall. (The chances that the Republicans will pick up seats seem remote.) He wants to partly appease the base by showing some support for the presidential nominee, but not so much as to turn off the establishment and Never Trump figures who have denounced the candidate. And he wants to keep his long-term goal of slashing taxes and the social safety net viable. He wants to keep the House Freedom Caucus, the 40 or so hard-right representatives in the chamber, from making his life too miserable.

It is a very narrow needle to thread. He has been denounced by some conservatives for backing Trump, though his support has been lukewarm at best. Meanwhile, he has been excoriated by the right for a whole bunch of sins, including the primary loss of Rep. Tim Huelskamp of Kansas, which the HFC has pinned on Ryan. Even assuming he wins re-election as Speaker in January, he’ll be in for a very raucous term.

Here is the thing about Paul Ryan, though: He always comes out OK. He has been a part of every GOP defeat of the Obama era, yet somehow has never lost his reputation as a serious policy wonk no matter how many times anyone challenges him by pointing out how destructive his plans to turn the federal budget into an Ayn Rand wish fulfillment fantasy would be to the poor and struggling. In 2012 he was the vice presidential candidate on a GOP ticket that got stomped in the election that ended Mitt Romney’s political career. Joe Biden reduced him to a stammering, incoherent puddle during their one debate, exposing his policies as charlatanism.

Yet somehow, when the House GOP needed a leader less than three years later, Ryan was the only person senior Republicans found acceptable, to the point where they had to beg him to take the job and offer all sorts of concessions before he said yes. He’s the prototypical conservative who can push punitive garbage policies that would dismantle the social safety net, but he does it all with that nice, Midwestern hangdog expression that dares you to get mad at him.

Which is why he’ll likely be fine in the long run and his status as the GOP golden boy will remain intact. Ryan can change his position on trade deals and immigration reform to soothe the right, but his core fiscal policies – slashing taxes and spending, replacing Obamacare with vouchers and a suggestion you avoid getting sick – aren’t going anywhere. Even Trump grudgingly accepted the party’s economic policies in his speech in Detroit on Monday. Supply-side conservatism is staying around for the immediate future.

So no matter what happens with the GOP in the aftermath of November’s election, conservatives of all stripes will still need somebody to sell the gold-plated Buddha that is the same old trickle-down policies they have been pushing for 40 years. Who better for that than a guy who has been doing it for nine Congressional terms while keeping even a speck of mud from soiling his suit?