It won't happen, but compulsory voting might be the only solution to political ignorance in America 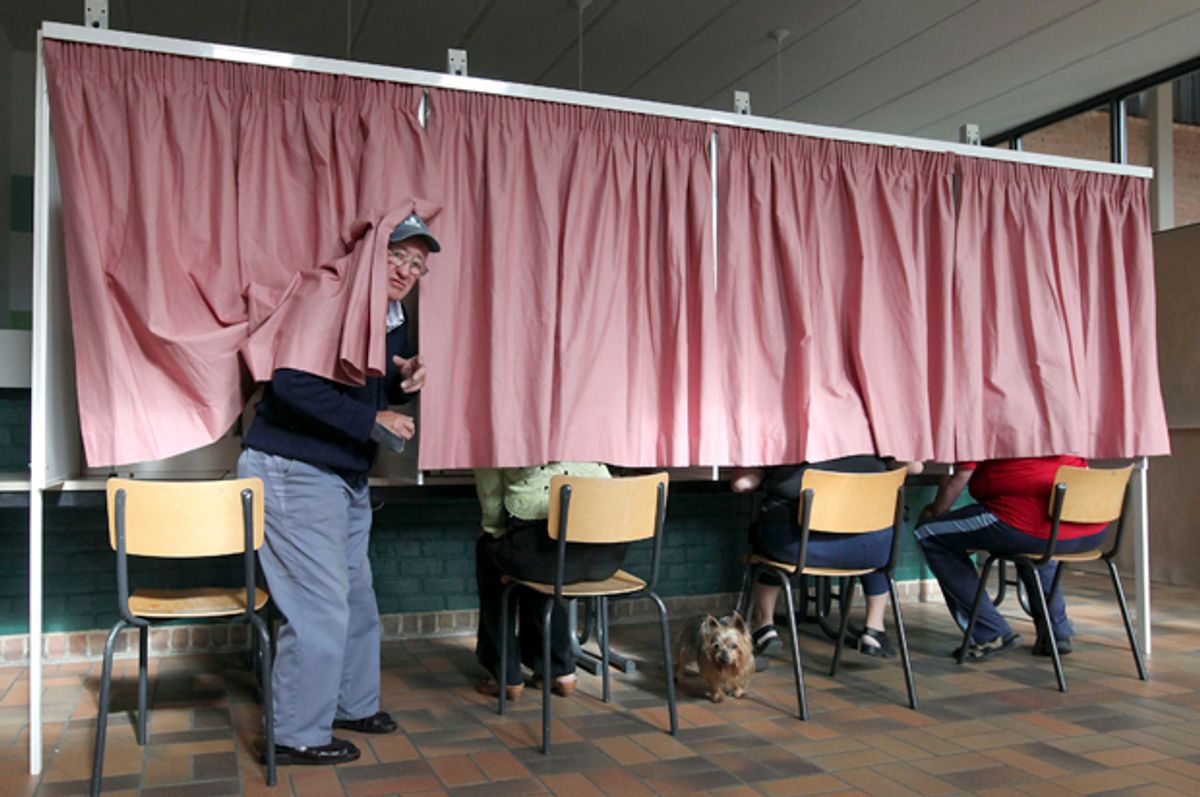 The success of Donald Trump reveals a number of troubling truths about our country, but voter ignorance is the most glaring. If more Americans were involved, if more were informed and discerning citizens, Trump's political existence would not be possible.

Love him or hate him, Trump is a reflection of the country. He sports his idiocy like a badge of honor, knowing his supporters do the same. He knows nothing of the world he wants to lead. He doesn't understand the issues and makes no effort to pretend otherwise. Virtually everything he's said about policy or geopolitics is false.

None of that matters.

Trump knows his audience. “I love the poorly educated,” he famously said. They love him back, too. Recall that Trump earned the most primary votes in the history of the Republican party, and he did it with overwhelming support from less educated voters. That's hardly surprising. You have to be blinkered by rage or woefully benighted to regard a man who speaks “just below a 6th grade level” as fit for the presidency. And yet millions of Americans found him refreshing, a welcomed blast of anti-elitism.

Trump's rise says much more about us than him. It's clear we have an ignorance problem in America. There's nothing we can do to stop demagogues from preying on illiterate voters, but it turns out there are ways to reduce voter ignorance. We know that people who vote regularly tend to know more than those who don't. The issue is that not enough people vote.

Among major democracies, U.S. voter turnout is uniquely low. In 2014, for example, a paltry 36 percent of eligible voters made it to the polls. Even in presidential election years, voter turnout peaks around 60 percent. This is a national embarrassment. A quick glance at the data gathered by the International Institute for Democracy and Electoral Assistance offers some perspective. Here are just a few countries whose turnout dwarfs America's:

There are legitimate concerns about the accuracy of some of these numbers, but the broader point is obvious enough: Americans are comparatively disengaged.

Other countries – like Australia and Belgium – have responded to similar problems with a simple measure: compulsory voting. Jill Sheppard, a political scientist at the Australian National University, analyzed the results of these efforts and found an interesting link between voter turnout and political awareness. It's not shocking to learn that compulsory voting leads to higher turnout, but it's significant that, when enforced properly, it incentivizes self-education and civic engagement.

Sheppard surveyed data from 133 elections in 47 countries and found that a better informed citizenry appears to be a second order effect of compulsory voting, and that holds across gender and educational backgrounds. “Compulsory voting – particularly where it is enforced with sanctions or fines – does appear to result in more evenly distributed political knowledge than voluntary systems,” Sheppard concludes. While she concedes that “the effects are nuanced and difficult to identify,” the pattern is instructive nevertheless.

Despite all the benefits of compulsory voting, the idea itself remains problematic. There's something (regrettably) un-American about forcing people to vote. The freedom to not give a shit is every bit as valid as any other in this country. And in any case this is a policy with almost zero traction. Congress can't agree on the time of day – something this contentious would die in the talking points phase.

Compulsory voting isn't the only ways to boost turnout, however. If we want more people to vote, simply holding elections on the weekend would be a seismic shift. But Republicans are opposed to inclusion efforts, as their support of Voter ID laws suggests. The GOP is an increasingly old and white party, and old, white people disproportionately vote. The demographics least likely to vote – low income Americans, young people, minority groups – are also the ones most likely to support Democrats. Consequently, Republicans will block any effort to systematically increase turnout.

Whatever the solution, something has to be done. Our process has produced a government with interests separate and apart from those it serves. Money in politics has a lot to do with that, but so does low turnout. The super PACs and the corporate-funded propaganda only work to the extent that people stay home or vote against their interests. A more active and informed citizenry would be utterly transformative. President Obama has praised Australia's compulsory voting scheme, claiming we could reach 70-80 percent voting rates if we adopted similar measures. Perhaps that's too optimistic.

At any rate, Sheppard's research – and Trump's ascendance – ought to compel us to think about these problems from a policy perspective. We're paying a high price for voter ignorance. An incurious, unaware populace will produce more Donald Trumps if we don't cultivate smarter citizens. If that doesn't inspire action, what will?