The dangers of Pokémon Go: Kids' brains are vulnerable to virtual and augmented reality 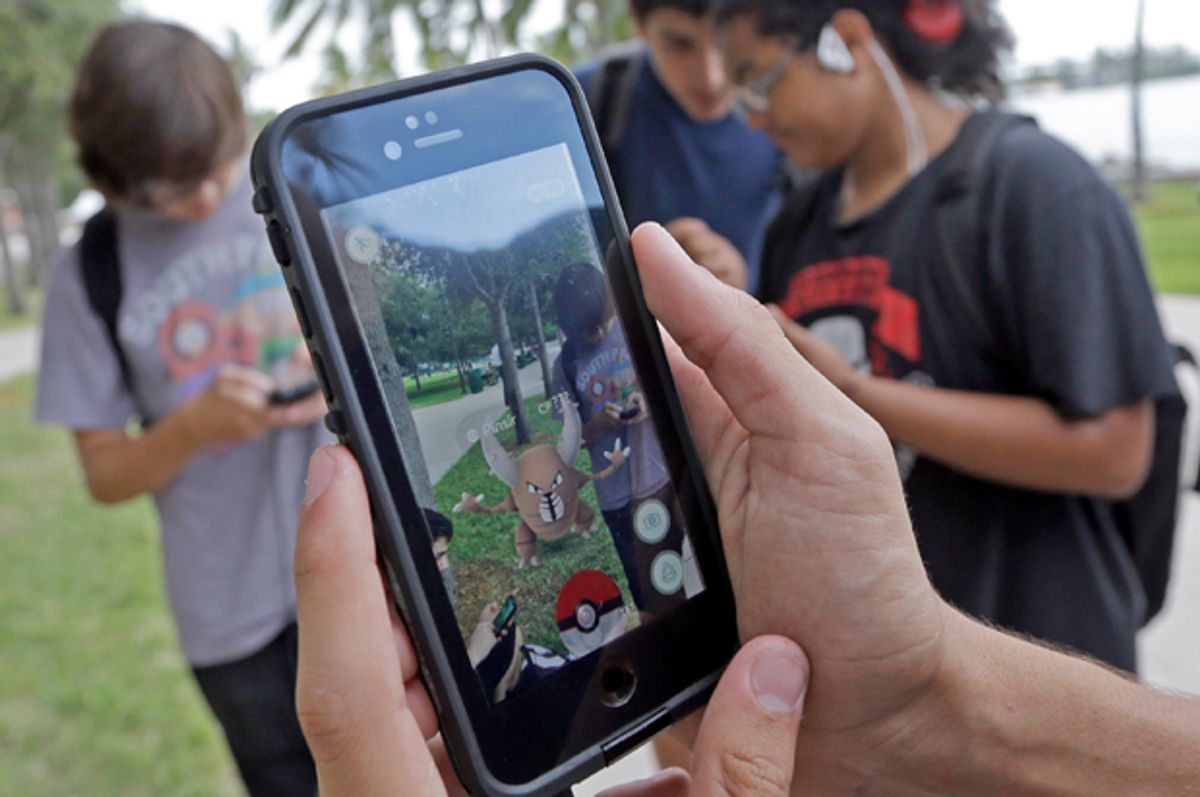 A few weeks back I was sent a link to an article about Pokémon Go—the latest craze that has been sweeping not only our native Manhattan, but seemingly the entire country. The person who had sent me the article thought I’d be interested in this latest tech development because of my work: I’m a psychologist and professor who specializes in treating addiction and working with adolescents; and I had just written a book called “Glow Kids,” which explores some of the uncomfortable clinical realities of too much screen time.

Two days later I was sent yet another link. This latest article from a major national newspaper waxed poetic about kids and the new Pokémon craze. According to that article, Pokémon Go is a parent’s dream, a video game holy grail: a game that actually got kids up off the couch and outside exploring and interacting with the real world—albeit while staring at a screen and pursuing an illusory augmented reality hologram.

That small detail aside, I had to ask myself: well, is this the game that finally proves the screen alarmists wrong? After all, kids are going outside to play the game and collaborating with others to find clues in their digital scavenger hunts. Aren’t those good things? In that same pro Pokémon Go article, a child and adolescent psychologist interviewed for the piece, was quoted saying “it gets kids out in the world and promotes socialization. It seems that kids are using it as a tool to connect to each other and the world around them.”

All that sounds perfectly reasonable, but my research and clinical work indicates otherwise. If you’re a child or pre-teen, there may be a price to pay. To be clear: If you’re an adult, have at it! Pokémon Go to your heart's content; wander the streets looking for the little augmented reality buggers. Just be careful you don’t walk into oncoming traffic or light posts, but Pokémon your days away if you like.

But children have additional vulnerabilities when they interact with interactive and immersive screens; their brains and what psychologists call “reality testing”—the ability to discern what’s real and what isn’t—are not fully developed yet. That’s why researchers who study the effects of immersive and interactive video game experiences have coined the term “Game Transfer Phenomenon” (GTP)— a reality-blurring psychotic-like feature that young people who are chronic gamers experience.

Researchers Drs. Mark Griffiths and Angelica Ortiz de Gortari conducted three studies with over 1,600 video gamers in Great Britain. They found that many showed GTP effects: gamers hearing or seeing aspects of the game hours or days after they had stopped playing. Some reported hearing sound effects, music and characters voices; others heard explosions, sword swipes and screams. One gamer reported hearing someone from the game constantly whispering “death” for a few days after he had stopped playing while others reported seeing images from the game pop up in front of their eyes.

Indeed, many young children who are Minecraft devotees report seeing the real world in the cube shapes of the game or see the cubes in their dreams. In my own private clinical practice, I’ve had the incredible experience of working with young gamers who had blurred reality with that of their game; one teen had to be psychiatrically hospitalized for a month after he had fallen down the rabbit hole — or into the matrix, pick your metaphor — of World of Warcraft and suffered a version of what I term “Video Game Psychosis.”

To be sure, there are children and teens with underlying emotional or psychological issues that may make them more vulnerable to such unfortunate outcomes when they are exposed to reality-blurring game experiences. But that’s the point—we don’t always know who those particularly vulnerable children are when we expose them to “the Matrix” (the mind-bending illusory world in the Keanu Reeves trippy film).

Beyond the work of Drs. Griffiths and de Gortari, researchers at Tel Aviv University published documented cases of "Internet-related psychosis" indicating that immersive screens were generating "true psychotic phenomena" and that this spiraling psychopathology was "a new consequence of our times." Dr. Joel Gold at NYU and his brother Ian at McGill University are investigating whether the reality-severing aspects of technology can lead to hallucinations, delusions and genuine psychosis.

Finally, my friend and colleague Commander Dr. Andrew Doan, a Johns Hopkins-educated M.D. and Ph.D. in neuroscience who is the Head of Addiction and Mental Health Research for the U.S. Navy/Pentagon, has researched video game effects and has documented case studies of young video-gaming soldiers who, when combined with sleep deprivation, had psychotic-like delusions and, in one instance, homicidal ideations. Yet when the homicidal gamer unplugged and got some sleep, the ideations went away.

What remains unclear, however, is whether or not these psychotic-like effects are more transitory in older players who have a better developed sense “reality testing” before they started gaming than children who do not yet have as clearly defined sense of what’s real and what’s not. Could the hallucinatory effects look more like permanent psychosis in younger gaming kids? While research on that is lacking, I have seen some evidence that that may be the case in my private clinical practice.

And let’s keep in mind that all these potential reality-blurring effects just mentioned were the byproducts of two-dimensional screens, which are not nearly as immersive—and thus as impactful on the psyche—as immersive Virtual Reality or Augmented Reality experiences. A book can be immersive; a video game, by virtue of its visual intensity and interactive nature are known to be even more immersive. VR and Augmented reality? They take reality-blurring to a whole new level.

We might heed a parable from the original Star Trek. In the "The Menagerie" (1965) a badly burned, wheel-chair bound Captain Pike—Captain Kirk’s predecessor—is given the opportunity to live out his life on a planet called Talos IV. The Talotians are able to manipulate reality and create very pleasing illusions—entire worlds of exciting and tempting Virtual Realities.

Yet this species that has the power to control illusions is also a dying species that has atrophied as a result of their illusion obsession. In the end, Captain Pike has a choice: live a miserable existence as quadriplegic burn victim who can’t speak—or be young again and live the life of his dreams.

Which would you choose?

Today, hundreds of thousands of people are embracing the idea of living in an illusion as Avatar-based “synthetic communities” like Second Life are exploding and new VR and Augmented realities are becoming all the rage.

The futuristic Hololens—a VR and Augmented Reality headset by Microsoft—was developed by Alex Kipman. The stringy-haired Microsoft designer who looks the part of hipster visionary, held a mind-blowing TED talk in February 2016 in Vancouver. Interestingly, he’s anti-screens because of their archaic two-dimensional limitations.

During his talk, Kipman criticizes the way we have become trapped by screens and describes a future world of interactive technology that is entirely immersive: “Today, we spend most of our time tapping and looking at screens.”

Seeking to create what sounds like a digital Ubermensch, Kipman discusses the “infinite possibilities” of a quantum universe and the “super powers” that computers can give human beings, as he decries the limitations of being stuck in a 2-dimensional screen world while we can now have “digital powers” to create reality within our own world. And then, with a wave of his hand, he creates a 3-dimensional ice cave, complete with hanging stalactites and growing stalagmites that seem to emerge directly out of the TED red dot on the stage.

“We are all beginning to build technology that will return us to the humanity that brought us to where we are today. Technology that will let us stop living inside this world of 2-D world of monitors and pixels and let us start remembering what it feels like to live in our 3-D world.”

It’s an odd vision; using technology to “remember” what if feels like to live in our 3-D world when we actually do live in a 3D world that doesn’t require Kipman’s Hololens to experience.

After watching Kipman talk, I am left wondering if I’ve just seen a visionary or a madman who will destroy the very essence of humanity with his VR crusade. I can’t help but think again of poor Captain Pike and the Talosians; is Kipman’s illusory world the one that we should all be aspiring to create and live in? Or, like the Talosians, is it the one that will decay and atrophy our species?

The answer remains to be seen. While we can argue the benefits of VR and Augmented Reality for consenting adults, as a psychologist who has researched and clinically worked with over a thousand kids over the past 15 years, what does seem clear is that such intensive and immersive reality-blurring is not age-appropriate for young children who are still developing their sense of what is real and what isn’t. We need to keep them out of the mind-bending Matrix for as long as possible.

Dr. Nicholas Kardaras is one of the country’s foremost addiction experts and Executive Director of the Dunes, one of the world’s top rehabs. He is also the founder and Executive Director of Hamptons Discovery, a progressive adolescent treatment program, and the creator of Seahab, the world’s first rehab-at-sea. His latest book, "Glow Kids: How Screen Addiction Is Hijacking Our Kids—and How to Break the Trance," is out now from St. Martin’s Press.