The end of discount luxury? The exodus of high-end brands is killing department stores

Michael Kors and Coach are the latest luxury brands to bail on discount retailers that dilute their exclusivity. 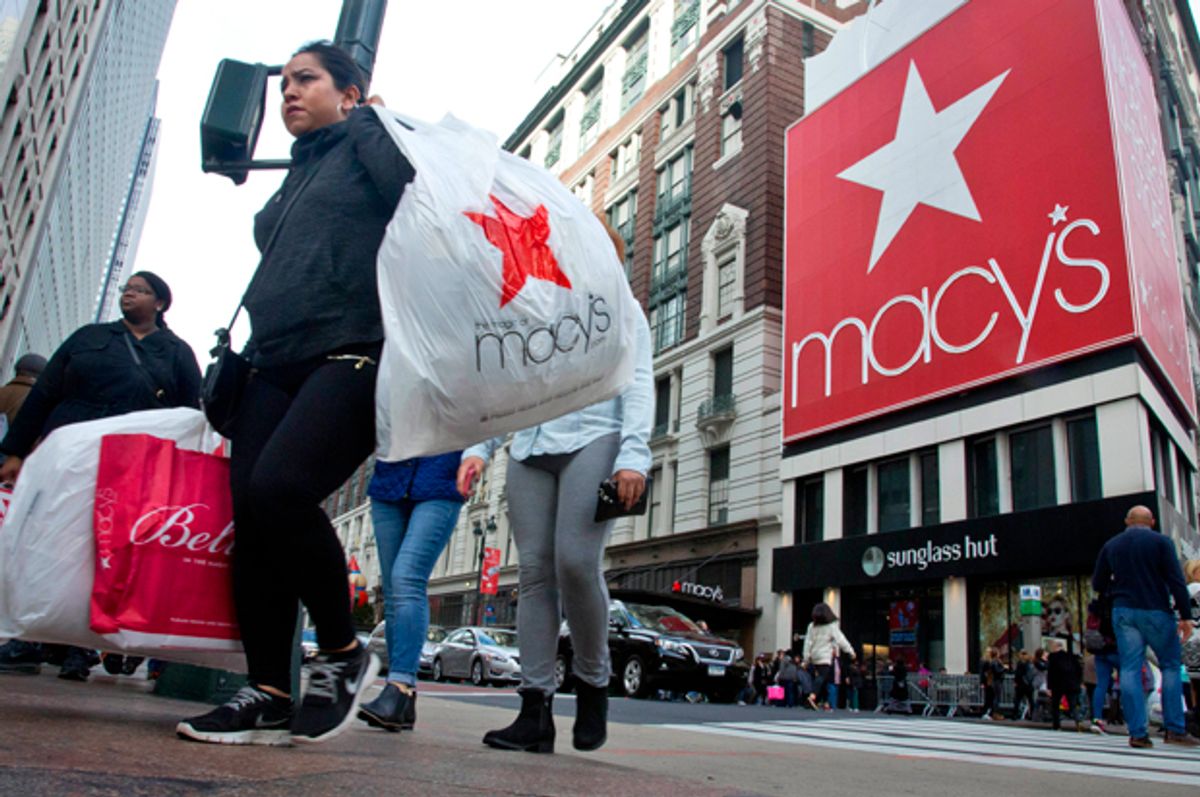 FILE - In this Nov. 27, 2015, file photo, shoppers carry bags as they cross a pedestrian walkway near Macy's in Herald Square in New York. Macy’s said Thursday, June 16, 2016, it has reached a tentative deal with the union representing workers at its flagship store in New York City, avoiding a strike. (AP Photo/Bebeto Matthews, File) (AP/Bebeto Matthews)
--

Luxury fashion brands have always lured customers with rarified products then chasing many of them away with their price tags. A fundamental part of the market math for high-end goods is that they need to be available, but not too available.

The problem vexing many well-known luxury fashion brands is that they’ve become too easy to buy as the struggling department stores that carry them turn to big red “half-price off” signs and an incessant stream of sale specials. The rise of ecommerce has essentially turned brick-and-mortar department stores into barely disguised discount outlets, and that hasn’t sit well with higher-end, off-the-rack fashion brands like Ralph Lauren and Calvin Klein.

On Wednesday, Michael Kors became the latest name brand to throw down the gauntlet against department store discounting. CEO John Idol said the company is halting all promotional activity at outlets that carry its handbags and other accessories.

“We think it’s creating confusion in the consumers' mind relative to the value of the Michael Kors brand, when it's being seen so often on sale in so many different places,” Idol said during his company’s fiscal first quarter conference call on Wednesday morning.

The call seemed to back up with bad news: Same-store sales — a key retail metric that excludes recently opened outlets — for Michael Kors-owned boutiques plunged more than 7 percent in the three months ending July 2, and sales revenue dropped 16 percent, to $147 million, compared to the same period last year.

Michael Kors' decision comes a day after the brand's main rival, Coach, pulled its products from 250 department stores across North America that it says were harming its exclusive reputation. “While we understand that customers may use department stores for trial and shopping across brands, the high level of promotional impressions created negatively impacts our long-term brand health,” Coach CEO  Victor Luis told analysts amid its fiscal fourth quarter earnings release on Tuesday.

Both Coach and Michael Kors are wagering that a reduced presence in struggling brick-and-mortar department stores like Macy’s and Nordstrom will lead to increased sales at their company-owned boutiques and websites where they have more control over brand perception. Other fashion brands, including Calvin Klein and Ralph Lauren, which closed 50 stores earlier this year, are also struggling with this over-saturation.

If luxury brands are facing losses, the department stores' situation is even more dire — ecommerce already represented an existential threat and now there's the exodus of high-end brands to contend with. On Thursday Macy’s announced it was closing 100 underperforming stores to focus its resources on prime brick-and-mortar locations and developing its own ecommerce capabilities.

“The reality is that luxury demand is falling,” industry consultant Bob Phibbs, CEO of The Retail Doctor, told Salon. “Europe is weak, China is weakening, and with the current politics in the U.S. people here are afraid to buy. Foot traffic has gone down everywhere.”

Phibbs adds that the solution is for these brands is to be cultivate exclusivity by producing fewer items, pull those products away from in-store discounts and regain control over how they’re marketed. “Nobody likes the idea of retrenching, but that’s the story for luxury goods right now,” said Phibbs. “The top one percent of the world just isn’t buying as much as they were.”