Ann Coulter needs a dictionary — and so does Donald Trump

Words mean things! From "sarcasm" and "rape" to "legitimate," the right's ignorance gets more glaring 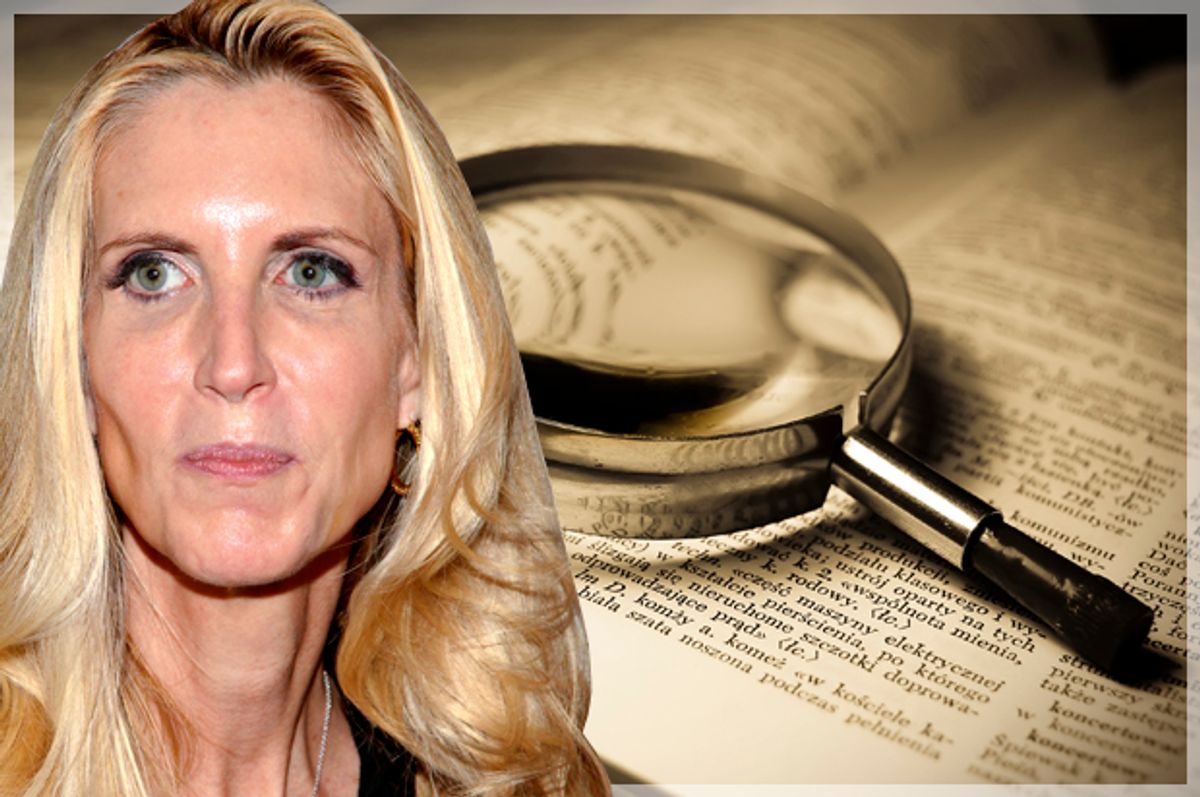 Quick question, my right-wing friends — how'd you do on the verbal of your SATs? Because I'm concerned you don't seem to know what words mean. I'm not talking the ornate, sesquipedalian variety. I mean really basic ones. Can we take up a collection to get you a dictionary?

First, of course, there's Trump, whose grip on basic vocabulary words like "sexism," "rigged" and "war hero" has long been shaky. At a rally on Wednesday, he said that President Barack Obama is "the founder of ISIS. He founded ISIS." On Thursday, he reiterated the assertion, telling Hugh Hewitt, "No, I meant that he’s the founder of ISIS."

But then on Friday, he tweeted out to his increasingly appalled public, "Ratings challenged @CNN reports so seriously that I call President Obama (and Clinton) "the founder" of ISIS, & MVP. THEY DON'T GET SARCASM?"

Dude, if you actually knew the first thing about journalists, you'd know that half of what they say is sarcasm. Could Trump have thought he was engaging in something that is instead called "hyperbole?" Could he have believed that when a person is asked for clarification and says yes, he meant what he said, it actually counts as sarcasm? Because it seems like a working knowledge of how sarcasm truly operates would be a helpful skill for a world leader to have, and that at this point, Trump doesn't possess it.

Then there's Ann Coulter. Yes, literally every single thing she says is garbage — and yes, I do know the precise meaning of the word "literally" — but on Thursday she outdid even herself, in a column in which she called Trump a "victim of media rape." She also condemned "sissy conservatives," writing, "Craven Republicans who blame Trump for the media's lies may as well blame a rape victim for wearing a short skirt. Except with Trump, it's the Muslim standard: They're blaming a woman's rape on being a woman." I think it's a safe bet that among her numerous shortcomings, Ann Coulter has no idea what rape is.

And though we could go on in this vein all day — check out Paul Ryan's definition of American universities as a "cartel" — let's just leave the conversation for now with poor Rudy Giuliani, who only Thursday was standing proudly behind Trump in his now "sarcastic" remarks about Obama and ISIS. Speaking on CNN, the former New York mayor defended the comments, calling them — seriously — "legitimate political commentary." And if that's not a clear case of someone who has zero idea what any one of those words mean, I don't know what is.