Trump out-crazied the crazies: 9 off-the-wall Republicans who can't get behind Trump

Trump’s lunacy and bigotry were evident from the onset of his campaign, but people are finally starting to catch on 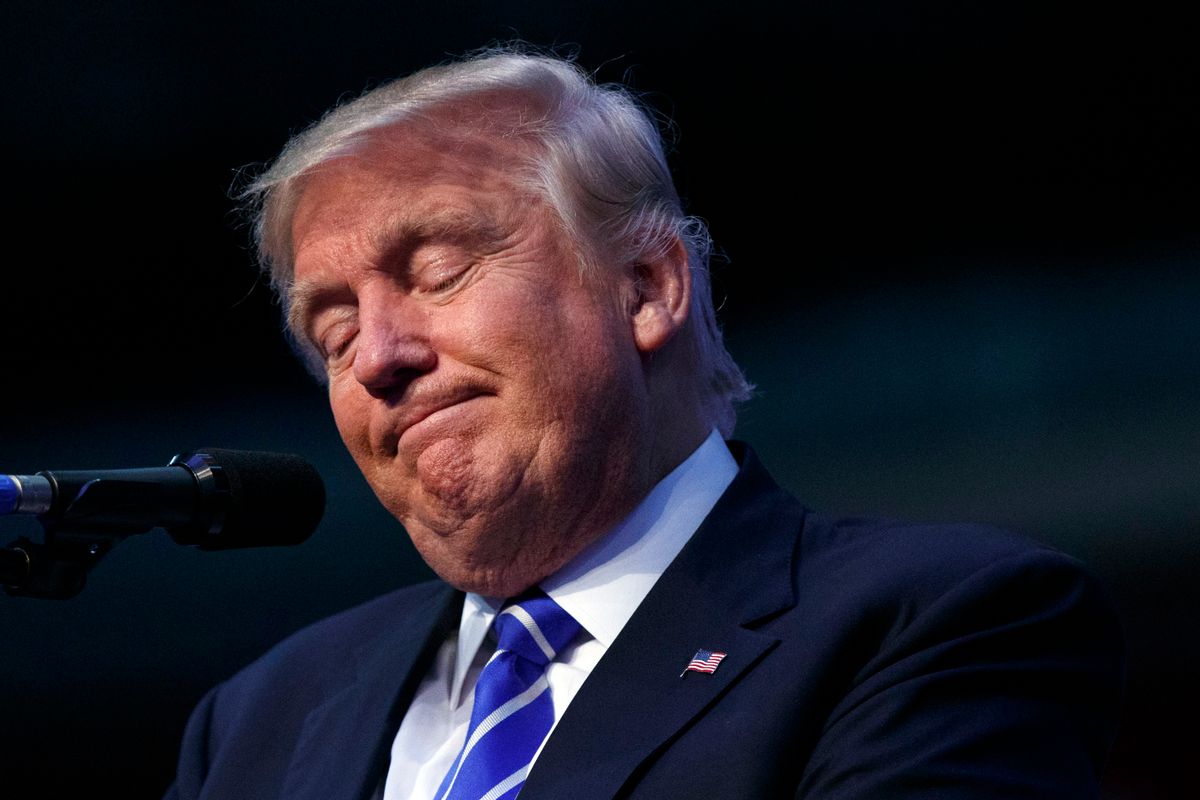 Donald Trump has said some pretty outrageous things. So outrageous that several conservative pundits have disavowed or refused to support the Republican candidate in his election campaign against Hillary Clinton.

Of course, the craziest aspect of hardline conservatives refusing to support Trump is that they themselves are guilty of engaging in some pretty off-the-wall rhetoric. Here’s a rundown of the craziest conservative voices who (somehow) find Donald Trump too insane to handle.

“In my heart, I wanted the smack-talking, hair-challenged, self-absorbed New York City billionaire Republican to nail down this baby,” Peyser wrote. “But in my head? Not so much.”

That’s right, the woman who once referred to CNN correspondent Christiane Amanpour as a “CNN war slut” has finally had too much of the bloviating, hate-filled rhetoric coming out of Trump.

“Some of us smitten with his shoot-from-the-lip style have reached our limits,” Peyser wrote in her column, later adding, “Trump won’t back down from his lunacy and bigotry.” The final straw for the Post columnist? His recent fight with a Gold Star family.

Trump’s lunacy and bigotry were evident from the onset of his campaign, but apparently all the sexist, racist, xenophobic, “ban all Muslims,” “build a wall” nonsense that preceded his fight with the Khan family wasn’t enough to sway Peyser. That’s the thing about final straws — you’re left to assume everything that came before was tolerable.

Conservative radio host and avid Ted Cruz supporter Mark Levin flirted with the idea of supporting Trump in the past. He liked, for example, the nominee’s proposal to ban all Muslims from entering the country, telling fellow conservative radio figures last December that Trump is merely suggesting we limit “access to this country, immigration of Muslims into this country for what he has said is a temporary period of time till we figure out what’s going on — in other words, to ensure we have the processes in place.”

Levin, who shares Cruz’s hypocritical brand of hardline conservatism, was totally cool with Trump’s unconstitutional non-solution to immigration. It wasn’t until Trump operative Roger Stone called Levin “a worm" and a "prostitute” that the radio host threw his support behind the #NeverTrump movement.

“Roger Stone is a thug. He’s a sleazeball,” Levin said, later adding, “as a result of what the Trump supporters have attempted here, particularly Roger Stone, I am not voting for Donald Trump. Period.”

“And if anybody has a problem with that, Donald Trump, you can talk to Roger Stone,” Levin said. “These bully, dirty tricks, Nixonian tactics, they’re only going to backfire. They’re only going to backfire. So, count me as #NeverTrump. There’s been too much of this, folks, way too much of this. The crap in the National Enquirer against Ted Cruz, the attacks on Michelle Fields, I mean, I can go right through the list, too much, too much, too much. At some point, you’ve got to stand up to it.”

Erick Erickson, who frequently questions President Barack Obama’s Christianity and argues the homosexual “movement” is "destroying America,” has a litany of crude and indefensible comments in his reservoir.

But oddly enough, Donald Trump is too crude and indefensible for the man who once opined the only reason college students study gender is so they can become “professional victims.” Erickson has been a huge voice in the #NeverTrump movement, writing an essay in February declaring he “will not vote for Donald Trump for President of the United States even if he is the Republican nominee.”

Which is substantively true — Donald Trump does turn off all those voters. But you know what, Erickson? So do you.

Glenn Beck is out of his mind — that much has been clear for a while. This is the man who publicly contemplated killing Michael Moore, frequently compared globalization to Nazi Germany and once discussed being “on the verge of moral collapse at any time.”

But much like Erickson, Beck is woefully unaware of just how hypocritical and disingenuous his disavowal of Trump is, considering the constant stream of insanity that flows from his mouth on a daily basis.

“If they put Donald Trump in, try to put him in office, if that's what the people want, you are going to see an end to the Republican Party,” Beck later added. “It will just be over, there'll just be nothing left.”

Turns out Beck isn’t the only right-wing institution on the verge of a moral collapse.

I will continue to oppose Trump, implacably and unceasingly.

I will not bend. I will not cease this fight. I will never embrace this thuggish, venal, gibbering psychotic, and I will not countenance those who do. I don't care if I'm the last Republican in America standing to resist this man, but with almighty God as my witness, I will not vote for Donald Trump.”

Looks like gibbering psychosis isn’t confined to the Trump campaign.

Red State contributing editor Ben Howe cemented his right-wing radical status in 2014 when he refused to apologize after posting on Twitter, “Give me a gun. Put me in Darren Wilson’s shoes. I’d have shot Mike Brown right in his face.” But even with that trigger-happy suggestion, Howe refuses to support a candidate who once bragged he “could stand in the middle of Fifth Avenue and shoot somebody” and “wouldn't lose voters.”

"I will phone bank for Hillary if Trump is nominated,” Howe wrote in a post on the right-wing website.

“I will, should Trump win the nomination, work to make sure that the other dangerous and untrustworthy person, who has declared themselves to be a representative of progressivism, takes the job," he added.

Steve Deace, a former Ted Cruz surrogate, wrote an essay for the Conservative Review outlining his opposition to Trump:

“Conservatism is supposed to be about conserving the things that created American exceptionalism — not defining them down to play a part in a cult of personality. Neither is it supposed to be about race-baiting, ethnic tribalism, authoritarianism, support for Planned Parenthood or progressivism. That's the left, but that's also Trump, who's just repackaging our opponent's views in pro-American terms.”

To get an idea about what Deace hopes to conserve, look no further than his belief that social services provided gay people with a safety net to explore their “depravity.”

“We have that today, which is why the sexual revolution came after the welfare state, because once it was obvious that people were not going to be held directly accountable for their actions, we removed the inhibitions against human nature that we already had,” Deace said on his radio program in 2015.

“People who are hard-working and have to be self-sufficient and are not going to be propped up by the government don’t have the luxury of doing stupid, immoral things.”

Ah, yes the golden days of American exceptionalism, when people like Deace got away with saying outrageous things in public and still remained in positions of power. Deace, explain again why you don’t support Donald Trump?

Mark Salter, a former John McCain speechwriter who anonymously published a 2011 novel about the 2012 presidential race titled "O: A Presidential Novel" and once called Arianna Huffington “a flake and a poser and an attention-seeking diva,” decided earlier this year that he no longer supported the Republican candidate. Instead, he said he would be voting for rival Hillary Clinton.

"[T]he GOP is going to nominate for President a guy who reads the National Enquirer and thinks it's on the level," Salter tweeted in May. "I'm with her.”

Salter has since become a vocal opponent of Trump, posting frequent links to articles about defeating the candidate in November. Too bad McCain, Salter’s former boss, is still drinking the Trumpaide (at least in public).

Following the Khan controversy, Peggy Noonan — a commentary writer considered by many on the right to represent a more “moderate” Republican base — questioned the candidate’s sanity, writing:

“Here is a truth of life. When you act as if you’re insane, people are liable to think you’re insane. That’s what happened this week. People started to become convinced he was nuts, a total flake.”

But Noonan, a former Reagan speechwriter who said that president had “bad luck in Iran-Contra,” stopped short of suggesting she won’t vote for Trump, instead focusing on whether the GOP can survive the fallout if Trump loses the election. And considering earlier this year she blasted the #NeverTrump movement, arguing, “great political movements should not be run like private clubs,” it’s anyone’s guess where she stands on supporting “a total flake.”

Way to take a stand, Peggy.