Amnesty International said it may be a war crime. It follows several bombings of Doctors Without Borders facilities 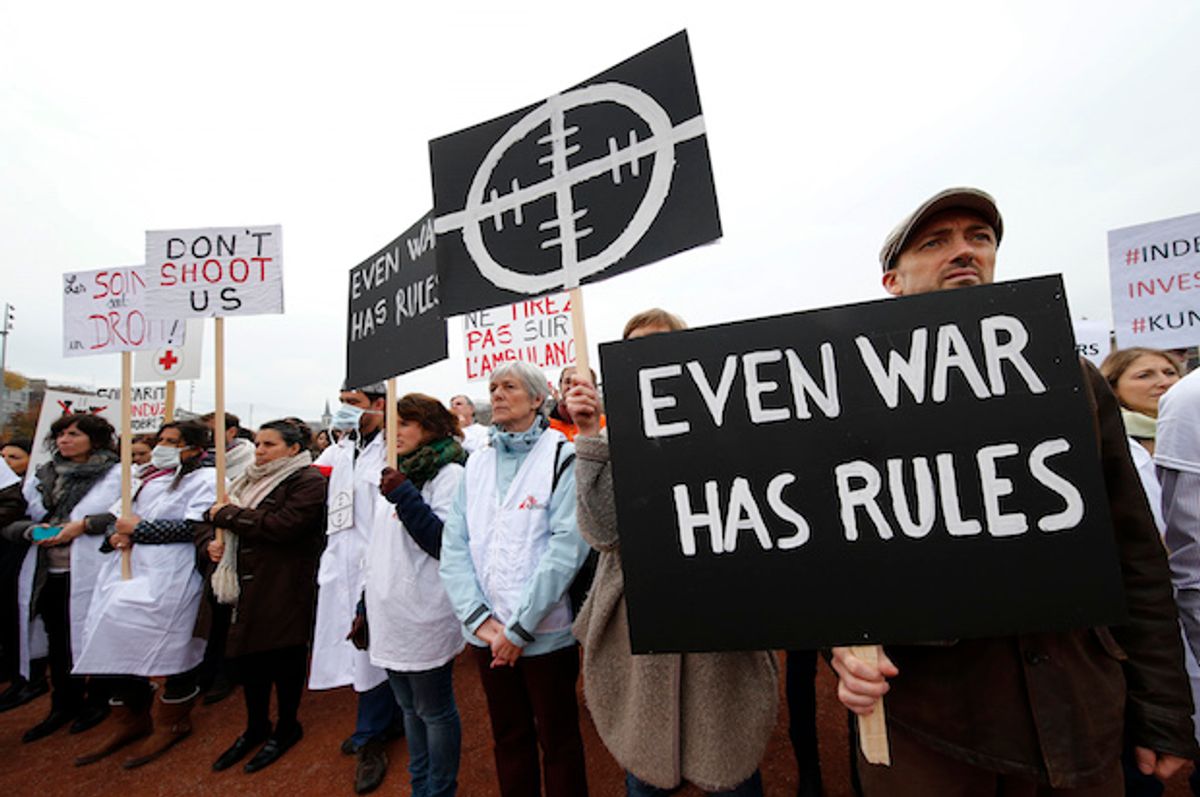 Doctors Without Borders staff protest in Geneva, Switzerland on November 3, 2015, one month after the U.S. bombing of their hospital in Kunduz, Afghanistan (Reuters/Denis Balibouse)
--

At least four medical facilities operated by the humanitarian group Doctors Without Borders have been bombed by the U.S.-backed, Saudi-led coalition in Yemen in the past year.

Abs hospital, in Yemen’s northwestern Hajjah governorate, was hit by an air strike on Monday.

Since July 2015, Abs hospital has been supported by Doctors Without Borders, which is known internationally as Médecins Sans Frontières, or MSF.

At least 11 people were killed in the attack, and 19 more were injured, according to MSF.

Amnesty International blasted the bombing, calling it "an atrocious attack that could amount to a war crime."

"Once again, today we witness the tragic consequences of the bombing of a hospital. Once again, a fully functional hospital, full of patients and MSF national and international staff members, was bombed in a war that has shown no for respect medical facilities or patients,” said Teresa Sancristóval, desk manager for the MSF emergency unit in Yemen, in a statement.

“People in Yemen continue to be killed and injured while seeking medical care. The violence in Yemen is having a disproportionate burden on civilians," she added.

"We want to express our outrage at having to send condolences once more to the families of our staff member and 10 patients, who should have been safe inside a hospital.”

Bloody photos allegedly of the attack circulated on social media.

MSF shared photos of the destruction.

At the time of the attack, there were 23 patients in surgery, 25 patients in the maternity ward, 13 new-borns and 12 paediatrics in Abs hospital, MSF said.

In the past year, 4,611 patients have been treated at the hospital.

MSF stressed that it has "repeatedly" shared the location and GPS coordinates of the hospital with the coalition.

.@MSF repeatedly shared location & GPS coordinates of #Abs hospital with all parties of conflict in #Yemen, including Saudi-led coalition

"The bombardment of this hospital is a deplorable act that has cost civilian lives, including medical staff who are dedicated to helping sick and injured people under some of the most challenging conditions," said Magdalena Mughrabi, Amnesty International's deputy director of the Middle East and North Africa Program, in a statement.

"Deliberately targeting medical facilities is a serious violation of international humanitarian law which would amount to a war crime. The circumstances of this attack must be thoroughly and independently investigated,” she added.

“Today’s airstrike appears to be the latest in a string of unlawful attacks targeting hospitals highlighting an alarming pattern of disregard for civilian life.”

Since March 2015, a coalition of countries led primarily by Saudi Arabia — with weapons, intelligence, and support from the U.S. and U.K. — has been brutally bombing Yemen, the poorest country in the Middle East.

"There have been other incidents where MSF-supported hospitals have been damaged by shelling or airstrikes," he added, "so whether you count it depends to some extent on how severe it is."

In October, the coalition bombed an MSF hospital in the northwestern town of Haydan, in Yemen's Sa'ada governorate. The U.N. condemned the attack.

This came just weeks after the U.S. bombed another MSF hospital in Kunduz, Afghanistan, killing at least 30 people, including 14 staff members. MSF slammed the bombing as a “war crime.” The U.S. refused to allow an independent investigation and no one involved faced criminal charges.

In December, the coalition bombed another MSF medical facility in the southern city of Ta’iz. This hospital had treated 480 patients in the two days before the attack.

In January, the coalition bombed yet another medical facility, this one in the Razeh district of Sa'ada governorate.

MSF made it clear in these previous attacks as well that it had provided GPS coordinates of its medical facilities to the U.S.-backed, Saudi-led coalition.

The medical group's international president gave a powerful, heart-wrenching address before the United Nations Security Council in New York City in May. "We are facing an epidemic of attacks on health facilities, impeding our ability to do our core work," Joanne Liu declared.

"In reality, they amount to massive, indiscriminate and disproportionate civilian targeting in urban settings, and, in the worst cases, they are acts of terror," she said. "They demolish routine and lifesaving healthcare for all. They make life impossible. Full stop."

This latest attack comes after a string of bombings of other civilian areas. More than 50 Yemeni civilians were killed in at least four attacks in the week since peace talks broke down on Aug. 6.

More than 6,500 people have been killed in the war in Yemen. The U.N. has repeatedly reported that the U.S.-backed coalition is responsible for two-thirds of civilian casualties.