Public marriage proposals are awkward: An Olympic medal ceremony — among other events — isn't the time or the place 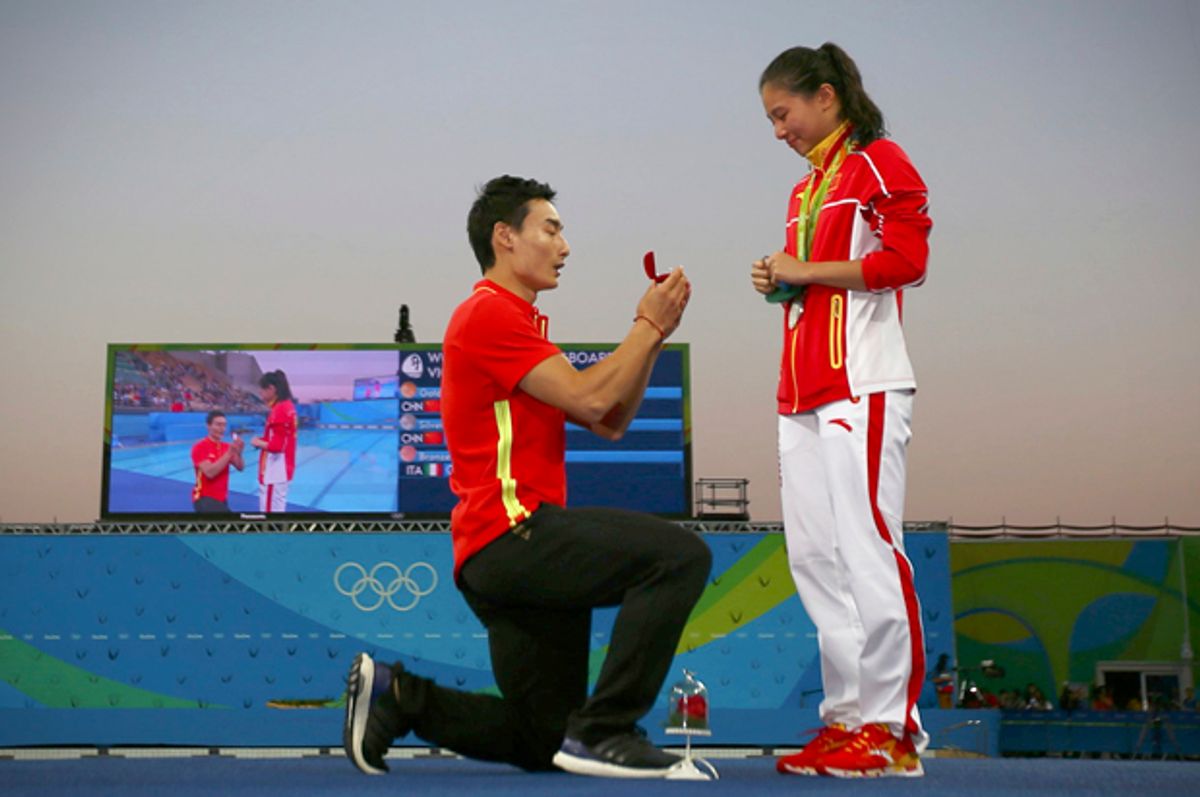 He Zi is a world class champion diver. At the 2012 Olympics, the now 25-year-old Chinese diver took a silver and a gold medal. In Rio this weekend, she again excelled, earning a silver women's 3m springboard diving. But you probably know her as that girl who got proposed to.

On Sunday, Qin Kai, her boyfriend of six years, decided to make an honest woman out of his special and ask her to marry him. And he chose to do it right at what was actually her big moment. As the Olympics reported, he "climbed up to the stage after He Zi received her silver medal, getting down on one knee while holding a red box with the ring and a glass-encased rose." So I guess you can just deal with sharing the spotlight at your moment of triumphant Olympic honor, right, gold medal winner Shi Tingmao and bronze finisher Tania Canotto? I mean, there's a man here who has something he wants to say! Let's all accommodate him, then.

Shi Tingmao, who is He Zi's teammate, graciously told reporters later that she'd known what was up in advance, and Canotto likewise demurred, "It's a really great moment to ask her to marry him." And it was a moment that lent itself easily to headlines about "taking the plunge," and how Zi had earned a "silver in 3m, gold in love." But it wasn't the only romantic gesture of its kind — last week, Brazilian women's rugby player Isadora Cerullo got a proposal from her girlfriend Marjorie Enya right after the medal ceremony in the first women’s rugby sevens final. As CNN reported, "With microphone in hand and heart-shaped balloons on standby, Enya, 28, asked Cerullo to marry her." It was, as The Guardian ominously predicted at the time, only the first marriage proposal of the games.

Whenever two people care enough about each other commit the unbelievably optimistic act of agreeing to marry, I am fully supportive of their joy. I also acknowledge that as the BBC notes, in China, "unusual marriage proposals are widely shared and commented on." It's just that I just don't want to be involved. I don't want to be corralled into strangers' life choices. I sure as hell wouldn't want to be enjoying my own hard-earned athletic achievement and have some guy decide to make it about something else.

Besides, hasn't the overblown, begging-to-go-viral proposal become outdated yet? Isn't it just so 2010? Why do these would-be brides and grooms still assume that everybody in their vicinity is eager to be their audience, even if they're there to watch a medal ceremony or a Channing Tatum movie or to buy some lumber? Now we're all supposed to extras in your rom-com? Must we? There's now even a company — formed by a couple whose own "epic" proposal went viral — that currently offers "wedding proposal services."

But what makes bride-to-be He Zi's happy news a little harder to take than some garden variety Jumbotron question-popping is that is it actively pulled the focus away from what she and the other two women were actually there for — and then that became the story. The Associated Press, for example, reported on the news that "Love is in the air at the Olympic diving pool. He Zi of China settled for silver in women's 3-meter springboard on Sunday before accepting an even bigger prize: an engagement ring." Didn't know the AP was qualified to make those value judgments.

Qin Kai, by the way, last week had to "settle" for the bronze in the men’s synchronized diving. The Irish Independent meanwhile claimed that "While we're sure that the proposal will remain a highlight of the games for Zi, it won't outshine her incredible, silver medal-winning performance" — a story that was headlined, without even naming her, "Olympic diver gets proposed to during medal ceremony after winning silver at Rio." So, okay, if you say so!

During an Olympics in which women — who by the way, have been killing it — have been dramatically shortchanged in the reporting of their victories, it would have been cool if the man had waited to express his hopes to pledge his heart, even by about ten minutes. But his action was only one lovestruck bronze medalist's choice. But the reporting, the media insistence that a ring beats a medal, is the greater problem here. And it relegated a female Olympian, once again, to the role not of a winner but of somebody else's future wife.