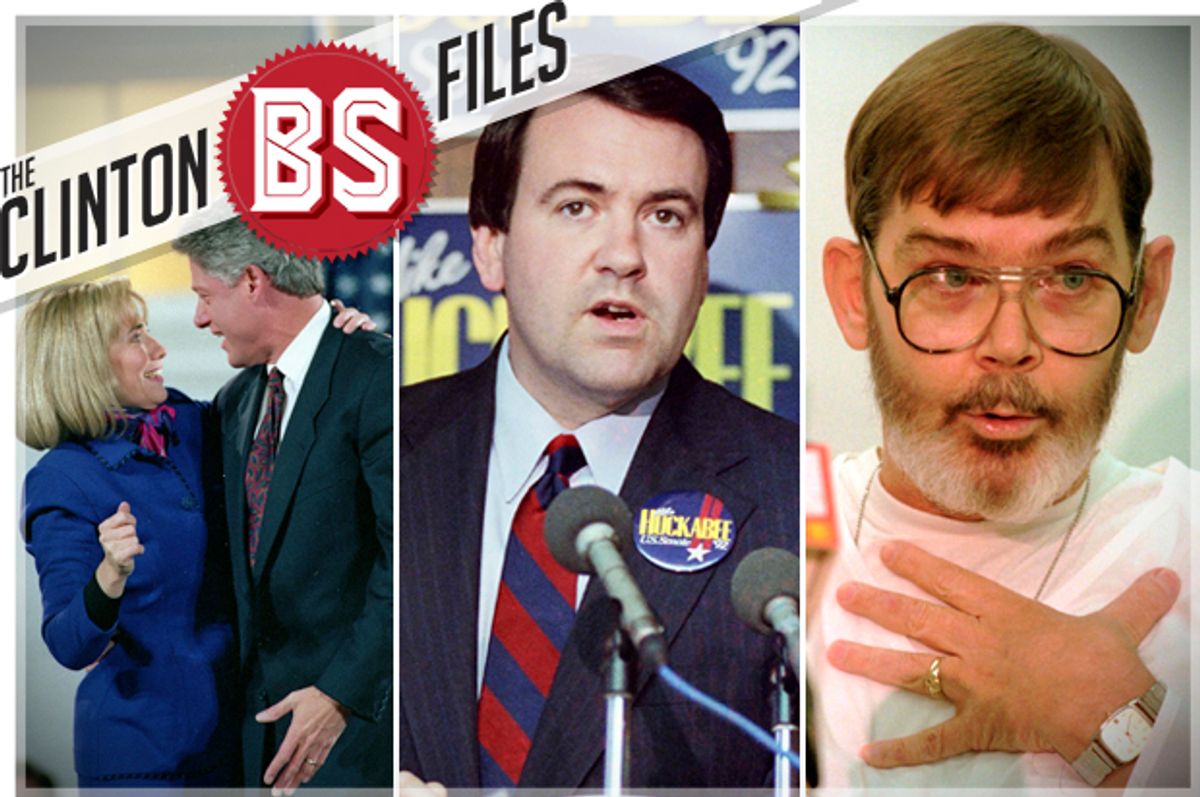 Welcome to the first in a new series we're calling the The Clinton BS Files. Bill and Hillary Clinton have been plagued by conspiracy theories throughout most of their life in the public eye, perhaps more than any other politicians in history. This is a weekly in-depth look at the stories behind some of these conspiracy theories.

From the get-go, the case of Wayne DuMond, of Arkansas, was a strange one. In the mid-80s, DuMond was convicted of raping a teenager named Ashley Stevens in Forrest City, Arkansas. Shortly thereafter, as Gene Lyons of the Arkansas Democrat-Gazette recalled in a 2007 retrospective, DuMond became "the Arkansas celebrity inmate of the 1990s."

First, somebody castrated him while he was free on bond awaiting trial. (Local investigators said they suspected drunken self-mutilation, not unknown among sex offenders.) Worse, the local sheriff exhibited DuMond's testicles in a jar of formaldehyde, an Arkansas-gothic stunt triggering rumors of vigilante justice.

Second, DuMond's victim, who'd recognized her attacker on the street weeks after the crime, was a distant cousin of Clinton. That excited the kinds of conspiracy nuts who circulated Clinton "death lists." They portrayed DuMond as a victim of the Clinton machine's satanic wrath. His innocence became an article of faith on the fruitcake right.

It was one of the earliest cases of the Clinton conspiracy theory machine. During Bill Clinton's tenure as governor of Arkansas, he refused to either pardon DuMond or help him get early release, causing Clinton's political enemies to float the claim that Clinton was involved in framing an innocent man. (Why Clinton would want the wrong man in jail for his second cousin's rape has never been explained by the haters.)

Likely, due to conservative hatred of Bill Clinton — who drew ire in no small part because of his feminist wife — DuMond because a cause célèbre of the Christian right in Arkansas.

Jay Cole was an Arkansas pastor who made a name for himself in the state with his bombastic hard-right views and TV commercials warning that America had lost its way. He also befriended DuMond, and their relationship became so close that DuMond's wife lived with the Cole family for a time.

"I became his spiritual director," Cole was quoted as saying in the LA Times. "He was a nice fella, and it was hard to believe he could have done what he was accused of doing. And Wayne claimed to be saved."

Cole was also good friends with Mike Huckabee, and when Huckabee became governor of Arkansas in 1996, the Christian right community started a pressure campaign to get DuMond released from prison.

Not that Huckabee needed much goosing to make common cause with conspiracy theorists accusing the Clintons of shady dealings with the DuMond case. While governor, Huckabee wrote to DuMond, expressing his "desire is that you be released from prison".

By then, Bill Clinton was president, and this conspiracy theory made the jump to the national stage.

Steve Dunleavy of the New York Post went on a crusade to expose Clinton's supposed frame-up of an innocent man. In a typical 1999 piece, Dunleavy writes that the "rape never happened" and describes the victim as a "so-called rape victim." He also suggests that she fingered the wrong guy, even though that contradicts his assumption that it "never happened."

(Stevens, on the other hand, told the LA Times that she'll "never forget [Dumond's] face".)

The conspiracy theory even made the leap from right-wing circles to lefty circles eager to paint the Clintons as neoliberal sellouts.

Ward Harkavy of the Village Voice published a glowing profile of DuMond, portraying Clinton's unwillingness to parole DuMond as evidence of his heartlessness. Of Dumont's castration, Harkavy wrote that it was "another Clinton saga of genitalia that fell into the wrong hands."

It was under this cacophony of suspicion aimed at the Clintons that Huckabee chose to act. According to a 2002 piece by Murray S. Waas of the Arkansas Times, Huckabee took extraordinary measures in fighting to release DuMond.

"It was a process marked by deviation from accepted parole practice and direct personal lobbying by the governor, in an apparently illegal and unrecorded closed-door meeting with the parole board," Waas wrote.

One board member claimed that Huckabee flatly stated that DuMond got a "raw deal." Another board member said she signed DuMond's parole papers "because the governor wanted DuMond paroled."

DuMond was paroled in 1997 and  released in 1999. The delay was the result of a relocation issue; states like Texas and Florida were asked to take DuMond as a resident, but they refused. Eventually, he was allowed to settle back down in Arkansas.

Which is where DuMond promptly raped and killed at least one woman, probably two.

In 2000, Carol Shields was found raped and suffocated to death in her apartment. A year later, another woman named Sara Andrasek was killed in the same way. Shields's bra had been cut from her body, which is exactly what Stevens described DuMond doing to her in 1984.

DuMond was suspected of killing both women and convicted of Shields' murder in 2003, and died in prison in 2005.

"There are families who are truly, understandably and reasonably, grief-stricken," Huckabee said in 2007, after his run for presidency dragged this case back into the light. "And for people to now politicize these deaths and to try to make a political case out of it rather than to simply understand that a system failed and that we ought to extend our grief and heartfelt sorrow to these families, I just regret politics is reduced to that."

It's a gross bit of hypocrisy from Huckabee, considering that he was the one who politicized this case. He was the one who got caught up in the Clinton conspiracy theory machine and he who laid pressure on the parole board to let DuMond go, to please the right wing nuts that believe the Clintons are criminal masterminds. He is the one who, so caught up in rumors of the Clintons' supposed evildoing, ignored letters from another woman who accused DuMond of rape in the 70s, though her case never went to trial.

"I was raised to take a person at their word, so I believed him when he said he was sorry," this woman wrote to Huckabee. "Of course, I didn't realize he is also a master at deceiving people."

Of course, the right-wing Clinton-haters were easy marks for DuMond's deceptions. It's easy to bamboozle people who want to believe.