No matter how well-intentioned, this kind of comedy only really works in a world where opportunity itself is equal 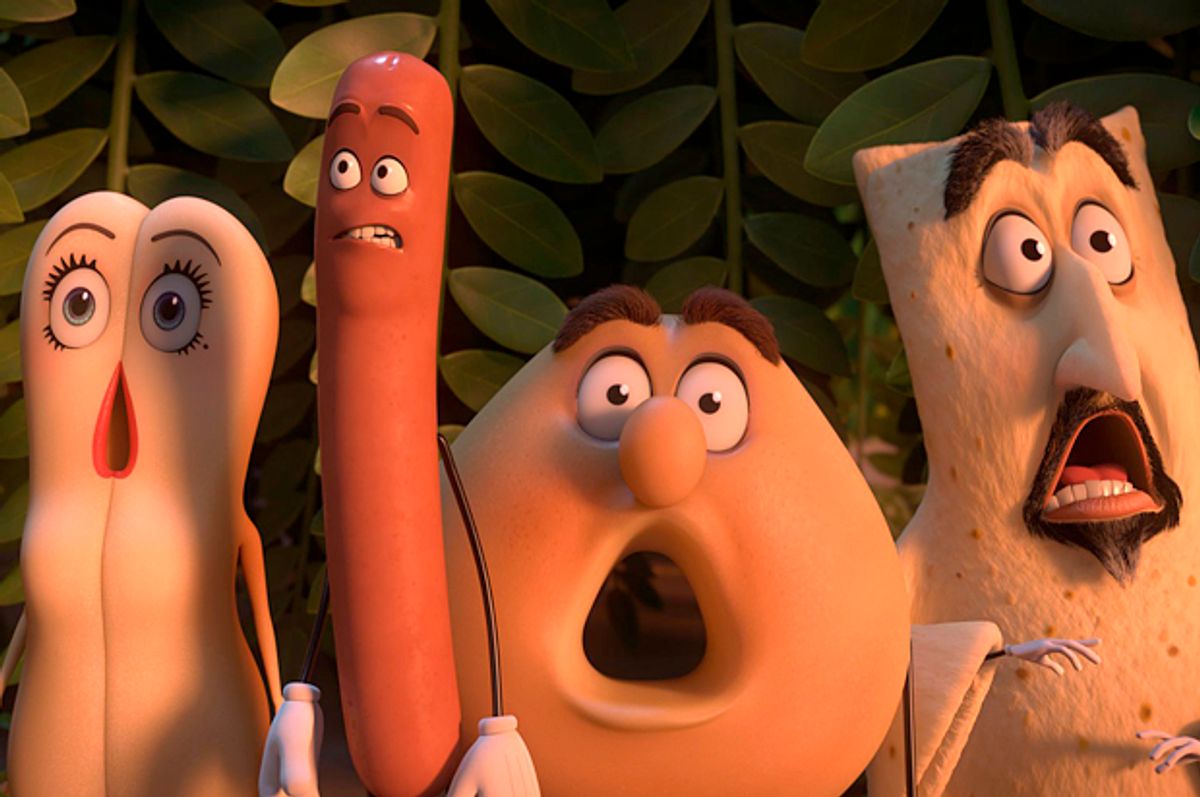 “Sausage Party” is the kind of movie that dares you to get offended.

Directed by Conrad Vernon (“Shrek 2”) and Greg Tiernan (“Thomas and Friends”), the film is gleefully, proudly ribald. The film exists in a “Toy Story”-like universe in which anthropomorphic food items dream of being selected by human shoppers to journey to what they call “The Great Beyond.” Their interest in crossing over, however, is not purely religious. A hot dog, voiced by Seth Rogen (“The Interview”), hopes to get raptured along with his girlfriend, a voluptuous bun brought to life by Kristen Wiig (“Bridesmaids”). In so doing, the two plan to get Biblical. This quest will end in a pansexual food orgy.

“Sausage Party” is so raunchy and foul-mouthed it practically puts “Bad Santa” to shame, fully earning its hard-R rating. In its first half hour, screenwriters Rogen, Evan Goldberg, Ariel Shaffir, and Kyle Hunter unleash a blitzkrieg of expletives on the audience, the hundreds of F-bombs a testament to the filmmakers’ belief that more is more. At one point, a used condom cries out in agony, having seen things no fragile rubber should. Meanwhile, the film’s villain (Nick Kroll) is an actual douche.

If it’s no-holds-barred commitment to tastelessness is impressive, “Sausage Party” is mired by unseemly racial politics, which led to widespread criticism from Twitter users over the weekend.

Wm. Steven Humphrey, the film critic for Portland Mercury, called it “dumb and racist.” “Unrelenting puns are the go-to jokes in this script,” he writes, “and each food or drink product is assigned a personality based on race: A flatbread is given a stereotypical Middle Eastern makeover, while his enemy, a bagel, is a Jew with a heavy, Woody Allen-esque accent. Interestingly, neither actor voicing these characters is Middle Eastern (David Krumholtz) or Jewish (Edward Norton).”

Humphrey also pointed to Firewater, a Native American chief played by Bill Hader, who is distressingly reminiscent of the redface caricatures in “Peter Pan.” Like the Indian Chief in the Disney feature, he speaks in “grunts and uses sign language.”

The fact that the character is named after a brand of liquor adds another layer of distastefulness to the enterprise. Alcoholism is a major epidemic in Native communities, as more than one in 10 of deaths are related to alcohol abuse. As Centers for Disease Control and Prevention report, that’s more than three times the national average. These high rates of dependency, which includes an increased likelihood for drug use, contributes to astronomically high rates of suicide among First Nation youth. Calling the only Native character “Firewater” is, to put it lightly, crossing a line.

To add to the mix, we also have a date-rapist tequila bottle with a Cheech Marin-esque drawl (also Hader), a lesbian taco who lusts after hot lady buns (Salma Hayek), and Mr. Grits (Craig Robinson), who needs little introduction.

Believe it or not, it could have been worse. As Rogen and Goldberg recalled in a BuzzFeed interview, Robinson’s character was originally called “Uncle Tom’s Rice” and spoke in “an unmistakable plantation patois.” The pair changed it following early test screenings with audiences, as well as some harsh feedback from an audience member at SXSW. She asked if the writers, all of whom are white, consulted people of color when creating these overt racial caricatures. “Oh, the movie very much stereotypes every single cultural group,” Rogen explained, a light chuckle underscoring the actor’s clear discomfort with the callout.

There, it seems, is the rub. In the vein of the Trey Parker-Matt Stone efforts “South Park: Bigger, Longer, and Uncut” and “Team America: World Police,” “Sausage Party” positions itself as an equal-opportunity offender. It makes fun of everyone—whether that’s women, black people, Jews, Arabs, Latinos, and even gays. In the film, fruit are, well, you probably guessed already.

For that kind of humor to be effective, equal opportunity offensiveness has to operate in a world where opportunity itself is equal. As Lindy West suggested in a 2012 essay for Jezebel, the problem is that “all people are not in equal positions of power,” which is especially true in Hollywood, an industry where white men remain overrepresented at the expense of everyone else. A 2015 report from the Director’s Guild of America found that 82.4 percent of films were directed by Caucasian males.

It would be tempting to say that little has changed in the film industry since 1953, when “Peter Pan” was released, but a 2014 survey from Columbia University found that things had actually gotten worse over that timespan—at least for Latinos.

It’s telling then that no Latino has won the Best Actor Oscar since 1950, when José Ferrer nabbed the trophy for playing the title character “Cyrano de Bergerac.” To date, a Latina has never taken home a Best Actress award—and only three women have ever been nominated for the honor.

One of those three was Salma Hayek, who was nominated in 2002 for playing the Mexican artist Frida Kahlo in Julie Taymor’s “Frida.” Hayek, who got her start in telenovelas, has spoken at length about her struggles in the film industry as a woman of color. In a 2016 interview with U.K.’s The Telegraph, she joked that she couldn’t even get hired to play the “lead prostitute” in a major film. Hayek might, however, be considered for a supporting role, as one of the background members of the brothel.

“I had things said to me that you would not believe,” the 49-year-old actress recalled. A studio executive once informed Hayek, who is the daughter of a Mexican opera singer and an oilman, that she would be a much bigger star had she been born in the United States. He allegedly told her, “The moment you open your mouth, you remind everyone of their maid.”

If the executive explained that she’d be relegated to playing housekeepers and sex objects her entire career, Hayek found that out the hard way when she was tapped by an unnamed director to be the lead in his science-fiction film. The studio forced him to drop Hayek, arguing that the concept wouldn’t sell. “A Mexican in space?” he was allegedly asked by execs. The actress, though, has had a hard time getting any role—even the thankless task of playing Adam Sandler’s hapless wife. When the comedian wanted her for “Grown Ups,” Sandler reportedly had to fight to get her cast.

It’s depressing that “Sausage Party” will be one of the few chances mainstream audiences have to see Hayek onscreen, and she’s playing a taco—basically a walking vagina. A report from the USC Annenberg School found that despite the underrepresentation of Latinas in film, they were the most likely group to be sexualized onscreen.

“Sausage Party”—which is, at its best, a potent parable about belief—appears to have been made with good intentions. Throughout the film’s decade-long process of getting made, Rogen and Goldberg consulted friends to make sure that their equal-opportunity offensiveness wasn’t just plain offensive. Jerrod Carmichael, who appeared in “Neighbors,” told BuzzFeed that Goldberg would come to him to vet the movie’s more problematic content. “Is this racist?” Goldberg inquired on more than one occasion.

In an industry where people of color continue to be stereotyped and shut out, it seems that if Goldberg had to ask, he already knew the answer.