Bros in the heart of darkness: Jonah Hill and Miles Teller's "War Dogs" is a scathing indictment of Dick Cheney's America 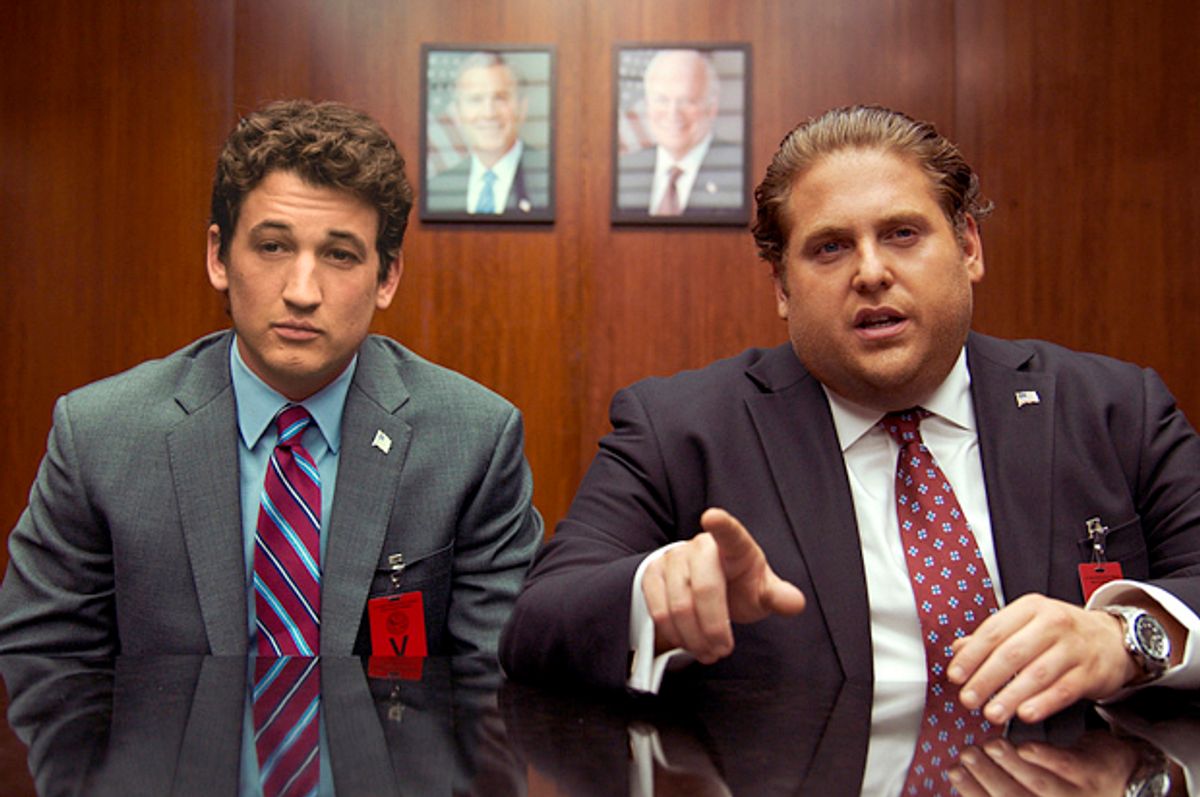 “War Dogs” kind of sneaks up on the viewer, which is a weird thing to say about a movie that stars Jonah Hill and Miles Teller as the slimiest characters of their entire careers and was directed by Todd Phillips, the guy who made the “Hangover” trilogy. Not only is “War Dogs” a surprisingly well-told tale in the classic American rags-to-riches-to-rags mode. It’s also a mordant morality fable with a genuine heart of darkness. (Plus, it has one hell of a soundtrack, matching its moods to an array of classic rock and hip-hop tunes in the Martin Scorsese vein.) The film may lure in its audience by promising a bro-tastic comedy about two ordinary dudes livin’ the dream, but under its obnoxious Porsche hood it’s got a lot more in common with “The Big Short” and “The Wolf of Wall Street” and “American Hustle.”

“War Dogs” takes place in the last decade, when the ill-fated wars in Iraq and Afghanistan, coupled with the piecemeal privatization of the military procurement process, produced a level of waste and corruption that was extraordinary even by Pentagon standards. But it’s not at all a stretch to view this mostly true story about a couple of middle-class washouts from Miami Beach who became international arms dealers as a tale about the creation of Donald Trump’s America and an economy of graft, greed and cynicism that hasn’t made anything useful for 35 years.

Phillips and his co-writers (Stephen Chin and Jason Smilovic) have taken some liberties with the real-life story of David Packouz (Teller) and Efraim Diveroli (Hill). But the craziest part of the movie is pretty much true. A pair of South Florida buddies in their mid-20s with no particular qualifications stumbled upon an open secret around the year 2005: The United States military would buy arms from anybody — as in literally anybody. Packouz and Diveroli made millions by bidding on various small-scale contracts that big defense firms didn’t notice or want and then filled them by buying outdated weapons equipment from Asia or Eastern Europe on the internet and shipping it to U.S. forces in the Middle East. Most of their transactions were not technically illegal, but their process definitely wasn’t ethical or efficient. It was a stupid method for supplying a stupid war.

I’m not sure how much the fictionalized details matter. I can find no evidence, for example, that Packouz and Diveroli personally drove a truckload of handguns 500 miles across Jordan and Iraq. On the other hand, they really did win a $300 million contract to arm the Afghan military and tried to fill it by repackaging millions of rounds of AK-47 ammunition from China, which had been stored for decades in warehouses in Albania. (American companies cannot legally import or sell Chinese-made arms.)

As is the case in the other three films I mentioned above, the underlying story about the fundamental dysfunction of American society and the U.S. economy is the bedrock, but the characters and episodes used to illustrate that story have been juiced up somewhat. Among other things, Teller’s character in the film is a composite of the real David Packouz and a third partner in the arms business, Alex Podrizki. Diveroli’s financial backer wasn’t a devout Jewish dry-cleaning entrepreneur (Kevin Pollak in the movie) but a Mormon businessman from Utah.

As a Miami New Times article makes clear, “War Dogs” is itself an instrument in the ongoing feud between Diveroli — the unquestioned mastermind behind the entire scheme — and his former partners, who allege he defrauded them. (Officially, the film is based on a Rolling Stone article by Guy Lawson, who later wrote a book about the case.) None of that matters to the audience; what viewers see is Jonah Hill playing Diveroli as a rotund, coke-snorting Mephistopheles with a genuinely disturbing laugh. On the surface, Teller’s Packouz is a likable if rootless innocent seduced by a charismatic old pal who returns to town with a flashy wardrobe, a fast car and wads of cash. But it’s not that simple: As is the case for every story of a con man and his mark — including the tale of America and capitalism — people believe what they want to believe.

Any normal and decent person would immediately perceive that Diveroli was a sleazebag and that his ingenious plans to sell outdated Cold War weaponry to his government was not likely to end well. But “War Dogs” is a story about a place and a time where all values of decency and moral judgment have been subordinated to the market. Even though Teller’s character is presented as the movie’s protagonist, a well-meaning guy anchored by his adoring Latina wife (Ana de Armas) and their infant daughter, Packouz surrenders to mendacity and corruption far too easily. He’s a young American indoctrinated to believe that entrepreneurial success requires vicious amorality. And who can say he’s wrong? Where most movies of this kind would show the hero redeemed, humbled and domesticated at the end, Phillips leaves Packouz dangling from a moral precipice at the final fadeout.

“God bless Dick Cheney’s America!” shouts Diveroli during one especially implausible adventure, and that feels like the topic sentence of “War Dogs.” Specifically, this refers to the dynamics of the second term of George W. Bush's presidency when the grossly inflated no-bid military contracts engineered by Vice President Dick Cheney and his cronies had become controversial. That produced the bizarre reverse-eBay marketplace that Diveroli exploited — one where anyone with a computer and a few operable brain cells could bid on military contracts.

But the Cheney-ness of America goes well beyond the grotesque levels of corruption enabled by his political party (Republican) that claimed to represent fiscal restraint. If the process of political nihilism that led from the right-wing backlash in the late 1960s to the arrival of candidate Donald Trump in 2016 was well underway by the Bush-Cheney administration, the wars in Iraq and Afghanistan nonetheless marked a crucial turning point. Maybe the real Efraim Diveroli is a sociopath and maybe the real David Packouz is a sucker. But whoever they are, they were shaped by a nation where reality no longer exists or at any rate no longer matters. These two guys get someone killed in this movie, and that probably happened in the real world, too. Did they care about that? I’m not sure; it depends what's meant. But probably they didn't care nearly enough.

When Diveroli lays out his business plan for Packouz in a Miami diner, the latter protests that he and his wife have marched in anti-war protests. “Dude, I’m against the war, too.  I fucking hate Bush!” Diveroli tells him. He doesn’t put it this way, but this is the “postmodern condition,” where reality is just a story people tell themselves, with no objective external coefficient. Climate change or the Middle East wars or immigration or “radical Islamic terrorism” are just idea balloons floating across the landscape; people hitch themselves to the ones they like and pop the others. Selling people in distant countries the means to kill one another is a sketchy thing to do perhaps, but so is downloading a hack for Angry Birds.

This is the second week in a row when a mainstream Hollywood comedy channels philosophical debates of the 20th century. (Last week it was “Sausage Party,” in some respects an existentialist inquiry into the nature of morality without religion, featuring horny hot dogs.) Maybe that reflects the nature of liberal-arts education in the '80s and '90s. And maybe it reflects the extent to which darker thinkers of yesteryear, from Sartre and Adorno to Foucault, foresaw the construction of today's world. As for Todd Phillips, who made two blissfully brilliant dude comedies in the early 2000s (“Old School” and “Road Trip”) — well, I genuinely don’t know what to make of the guy. Is “War Dogs” his mea culpa for the satanic bargain that produced three “Hangover” movies and made him wealthier than a couple of internet arms dealers could ever dream of being?