Liz Cheney's non-profit nonsense: The strange case of the Alliance for a Stronger America 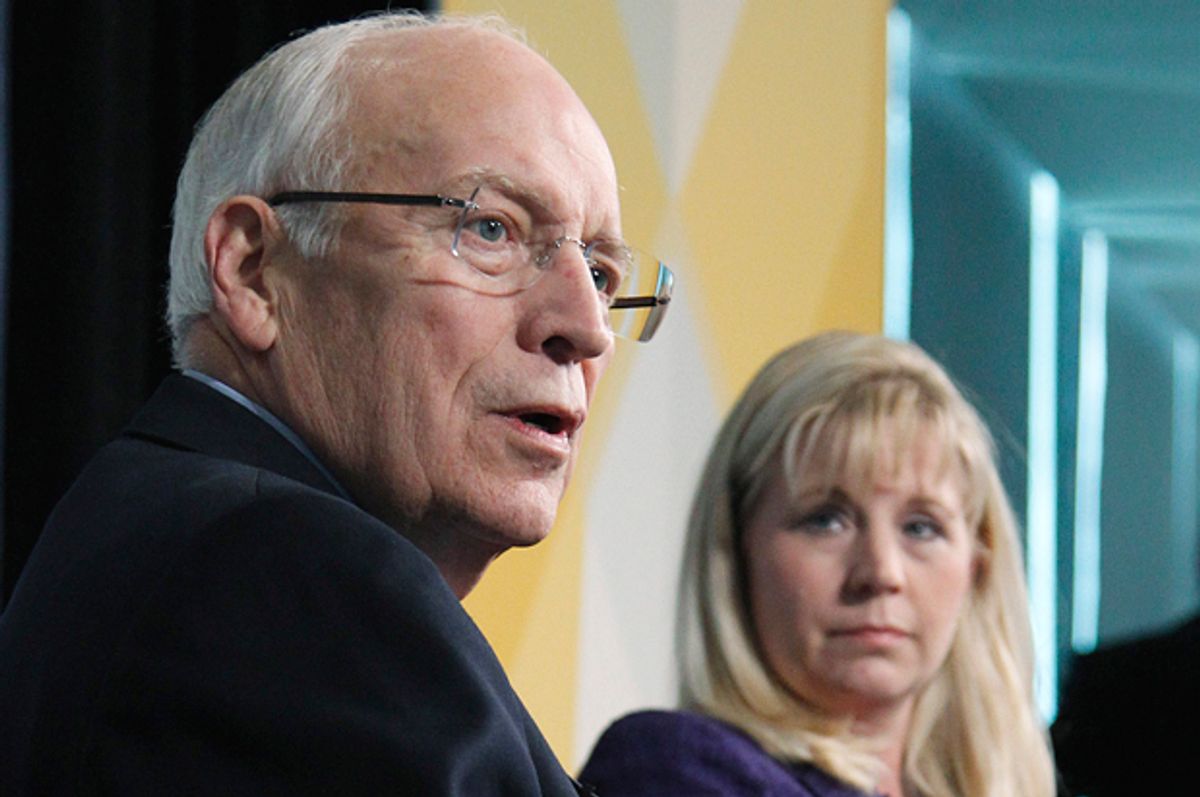 Liz Cheney, daughter of Dick, is running for Congress in Wyoming. She’s the favored candidate in today’s Republican primary for the state’s at-large congressional district, and assuming she wins, she’ll be a lock to replace retiring Rep. Cynthia Lummis. Winning the seat would be a measure of redemption for Cheney, who ran an ill-advised and hilariously shambolic campaign to unseat Wyoming Sen. Mike Enzi in 2014. As it stands, chances are excellent that January 2017 will mark the end of eight happy years of a Cheney-free federal government.

And Liz Cheney is very much her father’s daughter: neocon to the core and a vocal supporter of the disastrous foreign policy choices that were the defining failures of the Bush-Cheney administration. Dick and Liz even teamed up in June 2014 to launch their own national security non-profit, the Alliance for a Strong America, to “explain the indispensable role America and American power must play in the world in order to defeat the broad array of threats we face today.” Cheney and her father did the media rounds to promote their new group and explain the role they envisioned for it. “We really want to be a center of gravity,” Liz Cheney told Casper Star-Tribune in 2014, “a place where people can come to get information to help them make a case and help make sure people recognize at the end of the day, our security relies on American strength and power around the world.”

As a candidate for Congress, Cheney promotes her involvement with the Alliance as one of her achievements. Her campaign website boasts that “she is the co-founder of the Alliance for a Strong America, a non-profit organization based in Wyoming and focused on educating voters about the importance of American leadership and strength.”

That sounds pretty impressive. The only hitch in all this is that the Alliance for a Strong America doesn’t appear to do anything. At all.

The group’s website hasn’t been updated since March 2015, and even then its primary contribution to the national security debate was reposting anti-Obama (or pro-Cheney) articles written for other websites. The Alliance’s Facebook page hasn’t posted any new content for about ten months. Its Twitter account has been dormant for nearly two years, as has its YouTube page. There have been no significant mentions of the group in any press coverage for almost as long, except for a few stray articles noting that Liz Cheney founded the group with her father.

But the group still exists on paper, at least. It’s still filing annual reports with the Wyoming secretary of state – its most recent report, filed on March 31 of this year, lists Liz Cheney as the group’s director. (Cheney told the press in January that she’d resigned her position with the Alliance.)

Getting in touch with anyone involved with the group, however, is exceedingly difficult. The Alliance for a Strong America was founded as a 501 (c)4 advocacy group, so I figured I’d ask for its 990 disclosure forms to get a sense of what activities, if any, the group has been up to. Those forms aren’t available online, so I tried shooting an email to the Alliance’s press contact address, but no one answered. So I tried emailing the contact person listed on its most recent annual report only to have my message bounce back. I called the phone number listed, which belongs to a law firm in the Virginia suburbs of DC that provides legal counsel both to Cheney’s campaign and the Alliance, and was told they’d pass my questions along to the campaign staff (even though I was trying to get in touch with the non-profit).

So as best as I can tell, this national security non-profit that congressional candidate Liz Cheney founded with her former vice president father, and boasts of on her campaign website, doesn’t actually do anything and hasn’t done anything of substance really ever.

That’s strange enough. What’s even weirder is that this has happened before with the Cheneys. In 2009, Liz Cheney buddied up with some of her neoconservative pals to launch Keep America Safe, a national security non-profit that was ostensibly geared towards promoting hawkish foreign policy views but, in practice, was more about “publicizing the activities of Liz Cheney.” The group lurched along until June 2013, when nearly every trace of Keep America Safe was expunged from the internet right as buzz for Cheney’s failed Senate bid started to mount.

Whatever is going on with the Alliance for a Stronger America, a Cheney victory in tonight’s primary will likely extinguish whatever life it still retains – when you have a seat in the House of Representatives, you don’t need to use a sham, dark-money group to get your message out.