The worst natural disaster since Hurricane Sandy is happening right now. So why is the media downplaying it? 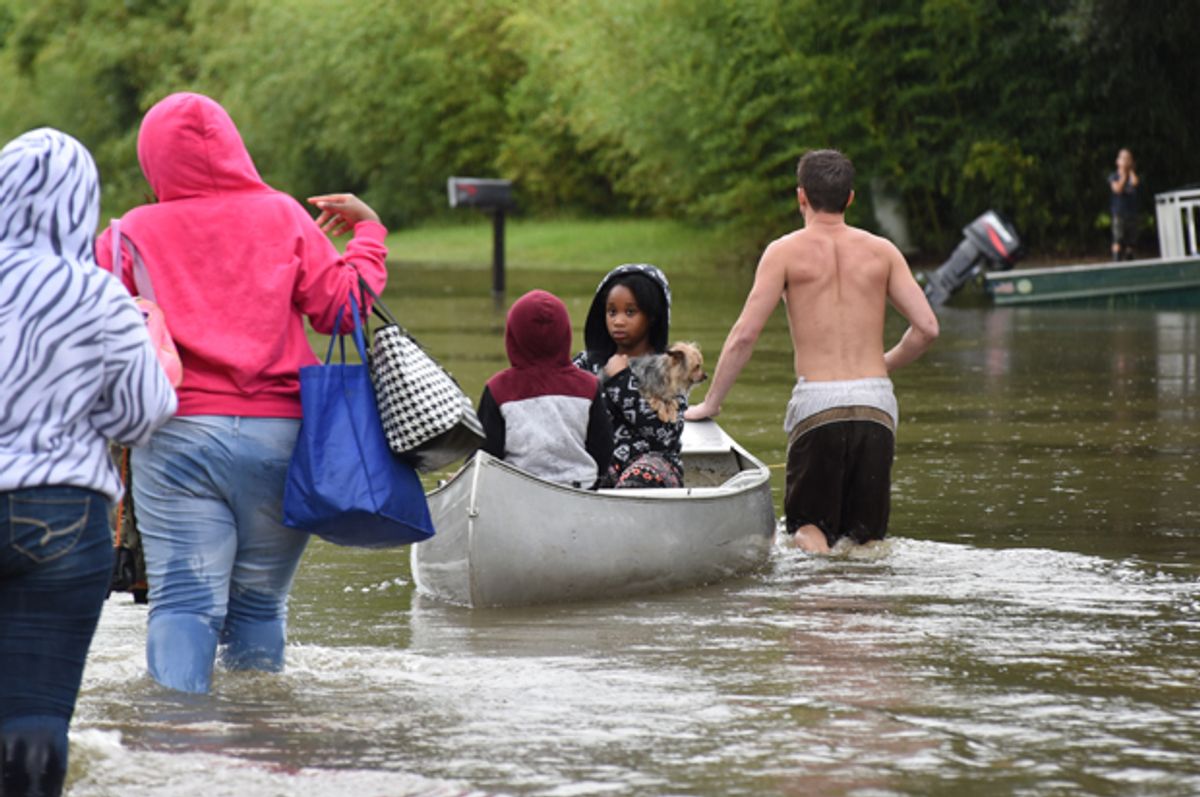 A young girl silently looks back at her family after being rescued from floodwaters that overtook Comite Drive and the surrounding neighborhoods in Central on Saturday. (The Advocate/Caroline Ourso)
--

If you don't live in or around Louisiana, you may not know that. And it's not your fault. Cable news has mostly ignored it. Sure, there's been coverage, but not as much you'd expect given the scale of the suffering. As Rod Dreher noted on his blog, a screenshot of CNN's home page over the weekend was conspicuously silent on this story. Among other stupidities, Adele's admission that she can't dance was deemed more newsworthy than a drowning American state.

To recap, parts of Southern and Central Louisiana absorbed two feet of rain in less than three days last week (For perspective, that's basically a Seattle rainy season's worth of rain). This was an unprecedented weather event. Areas with no history of flooding were deluged, leaving many without the protections of flood insurance. Baton Rouge, a major city in the region, was utterly devastated. Motorists were stranded on interstates. Whole neighborhoods were washed away. Parents were separated from children. Tens of thousands of people were rendered homeless. Major roads and highways were destroyed. In Denham Springs, an adjacent town, 90 percent of homes were decimated by flood waters. The figures are scarcely better in the surrounding parishes.

The aerial footage is apocalyptic.

All told, something like 20,000 Louisianans have been displaced, and over 10,000 are taking refuge in makeshift shelters. Seven people have died. Twelve parishes have been declared federal disaster zones. These numbers will rise in the coming days. The rain has subsided, but the water has not. There's nowhere for it to go as the rivers remain high and thus cannot take runoff from the tributaries.

This is already the worst natural disaster since Hurricane Sandy in 2012, and it's far from over.

In Louisiana, there's a gnawing sense that the national media seems wholly uninterested in this disaster. One listens in vain for a mention of the floods amid the breathless coverage of Donald Trump and Hillary Clinton's email testimony. I monitored the news over the weekend and was disturbed by the indifference. The historic floods felt like an afterthought, a throwaway segment sandwiched between Buick commercials.

Sadly, this is not surprising. There is no such thing as television news in this country. There are networks that peddle entertainment under the guise of news. Networks care about narratives, stories they can fit into familiar boxes and bundle for audiences. If a suspicious package was left at a mall in Toledo on Sunday, cable news would've covered it with greater care than they did Louisiana this weekend. Why? Because it's Islamic terrorism, and that's scary and an obvious ratings boon. Hurricane Katrina received non-stop coverage, but that was about race and class and privilege and a famous American city – human suffering was merely incidental. It's not that such stories aren't deserving of coverage. The issue is how comparatively little attention a story like this receives, a story of devastating consequence, and, clearly, a story that doesn't fit neatly into pre-established media narratives. It's just regular people living out their Sisyphean nightmares in places no one cares about.

I lived in Louisiana nearly half of my life. I know the people there. They're a strong, spirited lot. They have a way of singing and dancing around pain. They'll close ranks and deal with the challenges ahead. But more people should know about their struggle. That so many don't is itself a tragedy, and the national media is largely to blame. They appear to be coming around to the horrors they neglected, a good thing to be sure, but shame on them for taking so long.