No compromises, no regrets — Larry Wilmore and the price of "Keeping it 100" 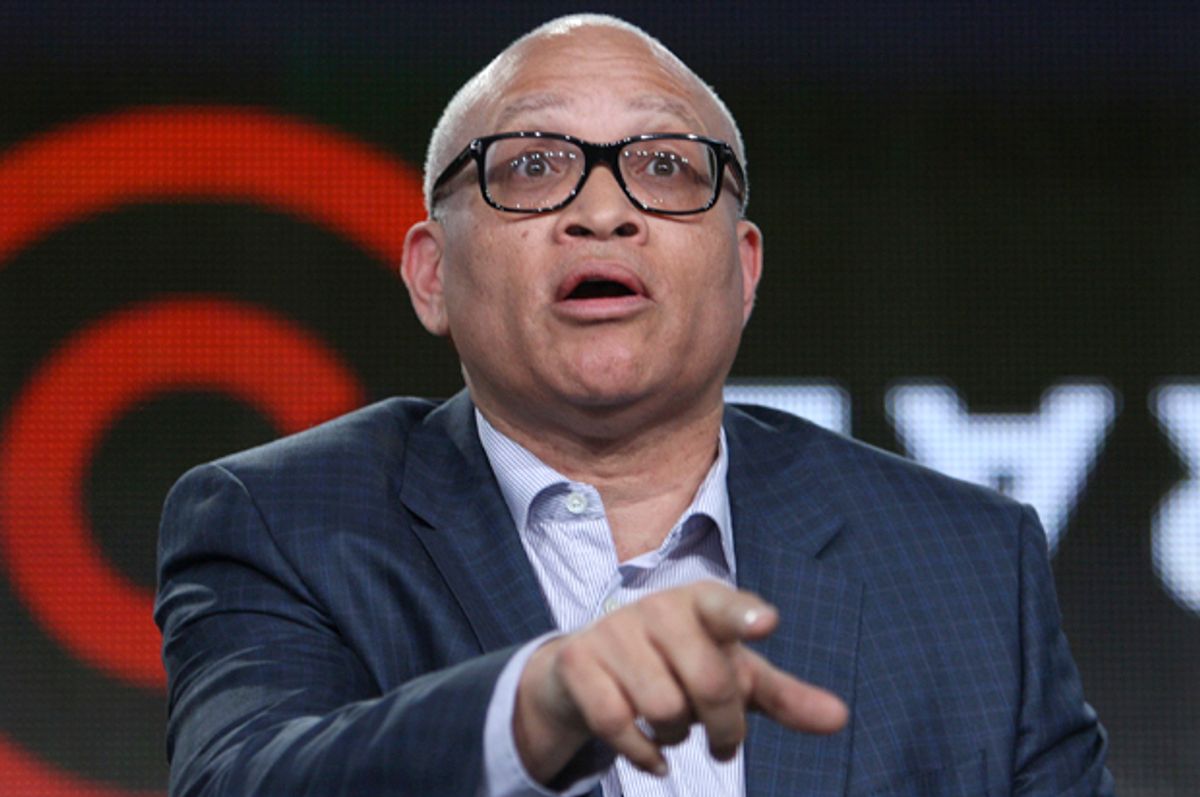 Though the two series could not differ more in tone, news of Comedy Central’s cancellation of “The Nightly Show with Larry Wilmore” brought to mind one of my favorite moments from “Key & Peele.” During one of its freewheeling opening segments, when hosts Keegan-Michael Key and Jordan Peele would lightly riff on whatever they pleased, they discussed the differences between their young viewers and their older fans.

Sixty-something black viewers, according to Key, sounded something like this: “I’m enjoying the program, young man.... But just remember: you ain’t on thin ice, brother, but you on ice.”

What "Key & Peele"’s hypothetical older fan referred to was the show’s sly commentary on racism, achieved without specifically making the sketch series about race. “Chappelle’s Show” did the same thing years ago for its first two seasons, making it a pop culture phenomenon and Dave Chappelle into a legend among comedians.

But “Key & Peele” and “Chappelle’s Show” were based on specific entertainment industry personalities, with the purpose of spinning comedy out of universally-relatable scenarios. Not only that, the stars of both shows ended them on their own terms.

“The Nightly Show,” in contrast, had a different mandate from the start, evident in the fact that it was originally titled “The Minority Report.” It was created by Jon Stewart to filter distinct and frequently intersectional viewpoints informed by race, class and gender into a late night talk show format.

Knowing this, African American viewers of a certain age, and with a long memory, may have guessed that Comedy Central’s latest unblackening would come around sooner or later. Perhaps not 12 weeks before the Presidential election -- that’s particularly surprising, given the precarious status of the rest of network’s faux-news block right now. But anyone who watched “The Nightly Show” had to know that Wilmore couldn’t maintain the show’s socio-politically fearless viewpoint indefinitely.

In fairness, “The Nightly Show”’s cancellation had far less to do with the show’s high melanin quotient than colorblind Nielsen ratings data. Wilmore inherited the timeslot from “The Colbert Report,” which enjoyed an average audience of 1.7 million viewers before Stephen Colbert departed to take over for David Letterman at CBS.

After that, viewership for the first year of “The Nightly Show” fell to an average of 922,000 viewers. In 2016, the year-to-date average has hovered somewhere around 776,000 viewers per night.

One can easily list the reasons for this, starting with the fact that “The Nightly Show”’s ratings were never quite as robust following Stewart’s departure from “The Daily Show,” which gave the show a strong lead-in when it launched in January 2015, but has been experiencing its own set of ratings woes since Trevor Noah took over as host.

Both Noah and Wilmore had to contend with withering in the shadows of giants. But Wilmore’s unique challenge was to follow Colbert’s larger-than-life, right-skewering trickster — the goofball counterbalance to Stewart, the liberal viewer’s deeply rankled, brutally honest best friend.

If Comedy Central had conducted a chemistry test with Stewart and Colbert’s dynamic in mind, Colbert’s successor would have similarly offset Noah’s weaknesses. What they got in Wilmore, however, was a modern version of Ellis Haizlip with a bit of Tavis Smiley mixed in — an affable, well-informed figure doing his ablest to find punchlines within a never ending parade of stories about the police shootings of unarmed black men, the erosion of civil rights on a federal level and, among other items on the lighter menu of the world’s horrors, the unforgettable sliminess of Bill Cosby.

It’s not as if Wilmore wasn’t doing the job for which he was hired. In tapping Wilmore, previously known to Comedy Central viewers the Senior Black Correspondent for “The Daily Show with Jon Stewart,” Stewart was sending a message to the industry.

Under Stewart’s regime, “The Daily Show” achieved new ratings heights and became a go-to destination for politically-inclined news junkies. But it was also overwhelmingly Caucasian and male in its writers room, even if it gave us a cast of alums that included the fabulous Samantha Bee (who has gone on to carry on Stewart’s legacy as the host of TBS’s “Full Frontal with Samantha Bee”), Aasif Mandvi, Wyatt Cenac and Jessica Williams (who is developing her own show at Comedy Central), as well as Wilmore.

Building “The Nightly Show” around Wilmore, then, was Stewart’s way of highlighting viewpoints that aren’t typically represented in mainstream media. Wilmore didn’t shoulder that task alone: He made Robin Thede, an African American woman, the show’s head writer for 159 episodes. He elevated the profiles of brash, intellectual stand-up comedians Mike Yard and Rory Albanese, introduced audiences to Ricky Velez, and gave ample screen time to a variety of women of color, notably Holly Walker, Franchesca Ramsey and Grace Parra.

All of these contributors helped Wilmore deeply mine uncomfortable topics that other late night talk show hosts would gingerly touch upon -- if they did so at all -- before moving on to easy comedy veins. It’s simple for comedians to feast upon the ever-increasing number of gaffes committed by Donald Trump; he’s an orange Julius Caesar who gives all comers ample opportunity to punch up.

It is much, much more difficult to utilize the late night comedy format to call attention to absurdist acts of institutional bigotry and discrimination, police brutality, voter disenfranchisement and a wide array of other civil rights issues concerning not only African Americans, but the LGBTQ community, women, immigrants and refugees.

Wilmore used “The Nightly Show” forum to taking longer looks at relevant social topics, such as “The Nightly Show” episodes focusing on black fatherhood, or the systematic barriers black women face in the arenas of dating, employment and education. He also followed the Black Lives Matter movement closely as it developed and expanded, doing so consistently and without apology. The show’s catchphrase, “Keeping it 100,” became its credo — and possibly its downfall.

“The Nightly Show”’s laser focus on these topics likely led to its inability to attract and maintain audience levels on par with “The Daily Show” and “The Colbert Report.” The typical viewer doesn’t enthusiastically gravitate toward discussions about racism, sexism and homophobia. Certainly most late-night watchers aren’t comfortable absorbing those topics right before nodding off, even when they’re treated with a lighter touch.

Other structural aspects of “The Nightly Show” also got in the way of its success. The roundtable format, patterned after Bill Maher’s series, didn’t effectively gel until quite recently. Though some guests spun topics into rich conversation around that table, the segment was just as likely just to be a multicar pile-up of opinions that didn’t form into a cohesive discussion.

Nor did Wilmore’s political analysis effectively serve as a counterbalance to the largely centric and safe Trevor Noah. Instead, his takes on larger issue often felt like a retread – a smarter retread, delivered with a note of hard poignancy where a punchline should have been before throwing to commercial, but a retread nevertheless.

Television needs “The Nightly Show”’s courageousness at this moment in history, but far more late night viewers are flocking to watch “The Tonight Show with Jimmy Fallon.” Younger viewers, too, are gravitating in higher numbers to “The Daily Show” and Chris Hardwick’s “@midnight.” Ultimately the whims and tastes of the 18-to-34-year-old demographic are what drive Comedy Central’s business decisions, and that’s why “@midnight” will slide into “The Nightly Show’s” timeslot after August 18.

Even accounting for its weaknesses, there is no doubt that viewers and Comedy Central will be losing an important voice when “The Nightly Show” airs its final episode Thursday night. But this is far from the last we’ll be seeing of Wilmore, who co-created and serves as an executive producer on Issa Rae’s upcoming HBO comedy “Insecure.” Wilmore's work on “The Nightly Show” also meant putting his role as executive producer of ABC’s Emmy-nominated “Black-ish” on the backburner after helping to usher it into existence. It would be wonderful to see him contribute directly to upcoming episodes.

Better yet, perhaps Wilmore will get a gig on a channel better suited to his unflinching sensibilities, much in the way former FXX host W. Kamau Bell has done with the excellent “United Shades of America.” Both he and Wilmore have proven themselves to be vital facilitators in the tough conversations that need to be had. They were also rarities on the late night landscape, the only African American talk show hosts in a game overwhelmingly stocked with white guys.

For the time being, though, we wouldn’t blame Wilmore for stepping behind the camera to take a creative breather. To quote another observation made by “Key & Peele”: one of the worst places to be a black man is at a party where there’s only white people. “It’s just way too much pressure to provide all of the fun,” said Key.