Salon's social bootcamp: Our mutual friend isn't invited to her wedding? And how soon is too soon to call him Doctor? 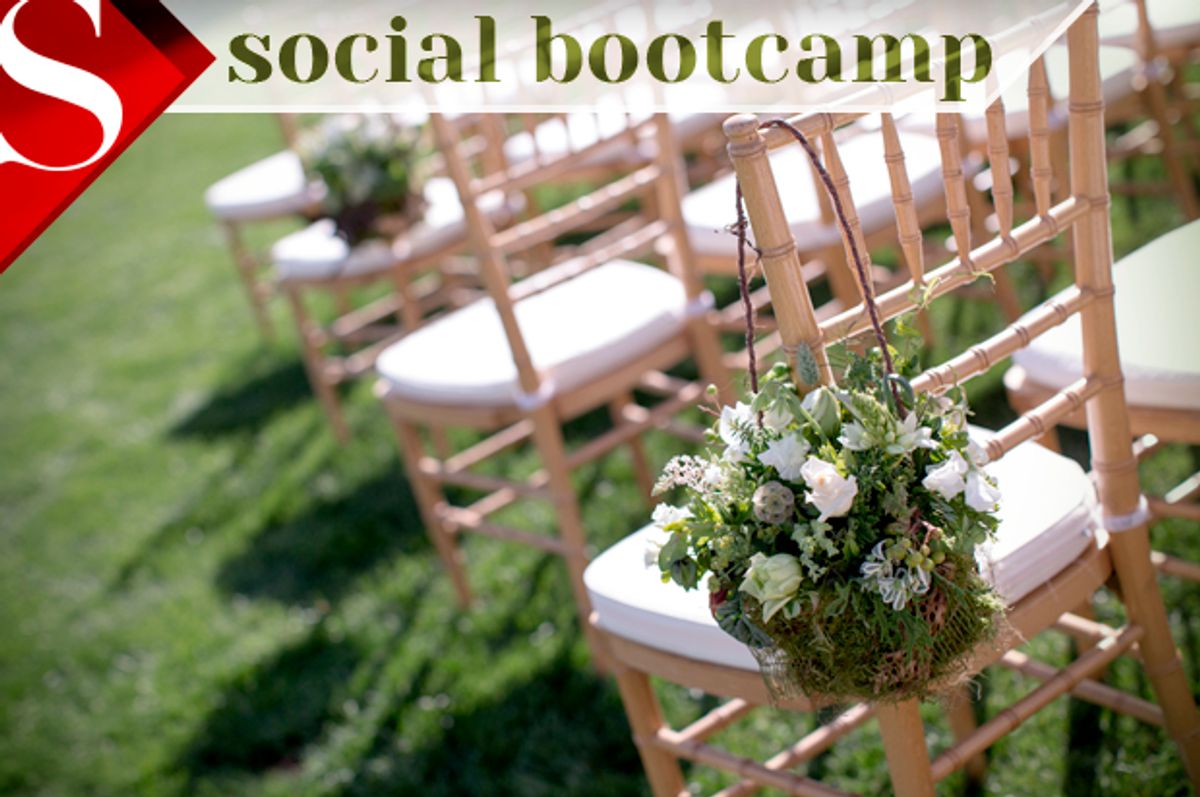 Welcome to Salon's Social Bootcamp. Fancy is the pen name of Kirsten Schofield, a writer who spends her spare time considering modern etiquette, manners, and social mores. If you have a technical (which fork do I use?) or theoretical (how shall I assess the unspoken rules of conduct at my new pilates studio?) question, direct them to advice@salon.com and she’ll do her best to shepherd you in the direction of correct behavior.

I am getting married shortly. My intended is finishing his medical degree in December. We’re getting married in January, but mailing the invitations in November. Would it be considered presumptuous or in bad taste for us to list him as Dr. Name Lastname on the invitation if he isn't officially a doctor until later?

Ah, wedding invitation wording! The bread and butter of the etiquette advice columnist’s work! Weddings are confusing because they have their own set of rules that only apply to them, so unless this is your third or fourth wedding, you end up flying blind.

Medical school is tough and man, is it long. Your fiancé knows what his grades leading up to this point have been, and he probably has a pretty good idea of what his grades may be in the very last days of the semester. If he has historically done well enough that flunking out of school at the eleventh hour isn’t on the table, he’s probably going to be okay.

He probably also has to take the boards still. I looked up the pass rates on these, and it seems like the overwhelming majority of people do, in fact, succeed in becoming board-certified physicians the first time they take the test.  If he falls in this camp, go for it. He’ll be a doctor on the day he gets married, so if it feels safe, no reason to pretend like that was ever in question. Plus, who doesn’t love to celebrate milestones for long periods of time? Not me! You’re talking to a woman who had four parties to commemorate finishing a particularly challenging math class in college with a passing grade.  Becoming a doctor is no small task, and seeing his name on his wedding invitation with his new title is likely to be an exciting moment for him as he embarks on two gigantic, lifelong commitments.

If he really is cutting it incredibly close with his grades and with the licensing exam or if you’re extremely risk averse, err on the side of caution and word your invitations with “Mr.” as his title. Let it be an embarrassment that goes unnamed if he’s unsuccessful in finishing school and an achievement to be celebrated alongside your marriage in the event that he is.  Also, please pass along his name to me privately so that I can avoid becoming his patient in the future. Best wishes for a happy marriage, and my sincere congratulations to your fiancé on the completion of his medical degree!

Yours in sickness and in health,

I have two friends (J and M) who I met while we all lived together in university. Over the years, I have remained very close friends with J, and good — but not incredibly close — friends with M. J recently visited the city both M and I live in, but did not see M. While talking about growing apart from people, J mentioned probably not inviting M to her upcoming wedding.

After she left, I saw M and she implied that she was upset that J came to town and saw me, and other friends, but not her.

Should I say anything to J? My impulse is to stay out of it entirely, but I still feel weird knowing that M clearly does not think of them as having grown apart.

Weddings and funerals are the most important and fraught events to which we as human beings choose to subject ourselves. The single-use aspect of these events is both a blessing and a curse — on the one hand, you have to invite your mom’s coworker you haven’t ever met, but on the other, you get to have everyone you love (or like fairly well) assemble in one place. These two events also have the option of being as private or as public as a person or family chooses: it’s a rare moment where you get to call your own social shot and no one can fault you for it. Dinner and dancing for 300? Great. Parents and siblings at the courthouse? Marvelous. The size and scope of it is up to you, and it isn’t open for discussion. Memorize and come to believe the following: you should never, ever assume you’ll be invited to someone’s wedding or funeral, nor should you be offended if you’re excluded.

My advice to you is to stay out of this. I, Fancy, have been in this position before, and I know it’s awkward, but you stand to gain nothing by allowing yourself to become the go-between. If M asks you about it, play dumb. If she presses you, play dumber.  Don’t tell J that M has been asking. Don’t tell M that you received an invitation to J’s wedding. Just keep your mouth shut. If pressed by either party, tell them to take it up with each other. It’s up to J to hold the line on who she is or isn’t inviting to her nuptials, and it’s up to M to realize that she and J have grown apart.

It’s going to feel bad for you, sure, because the realization you aren’t all aboard The Good Ship Buddylove anymore frankly sucks, but no action of yours will alter its course. Good luck, Third Wheel.

Yours in rough seas,