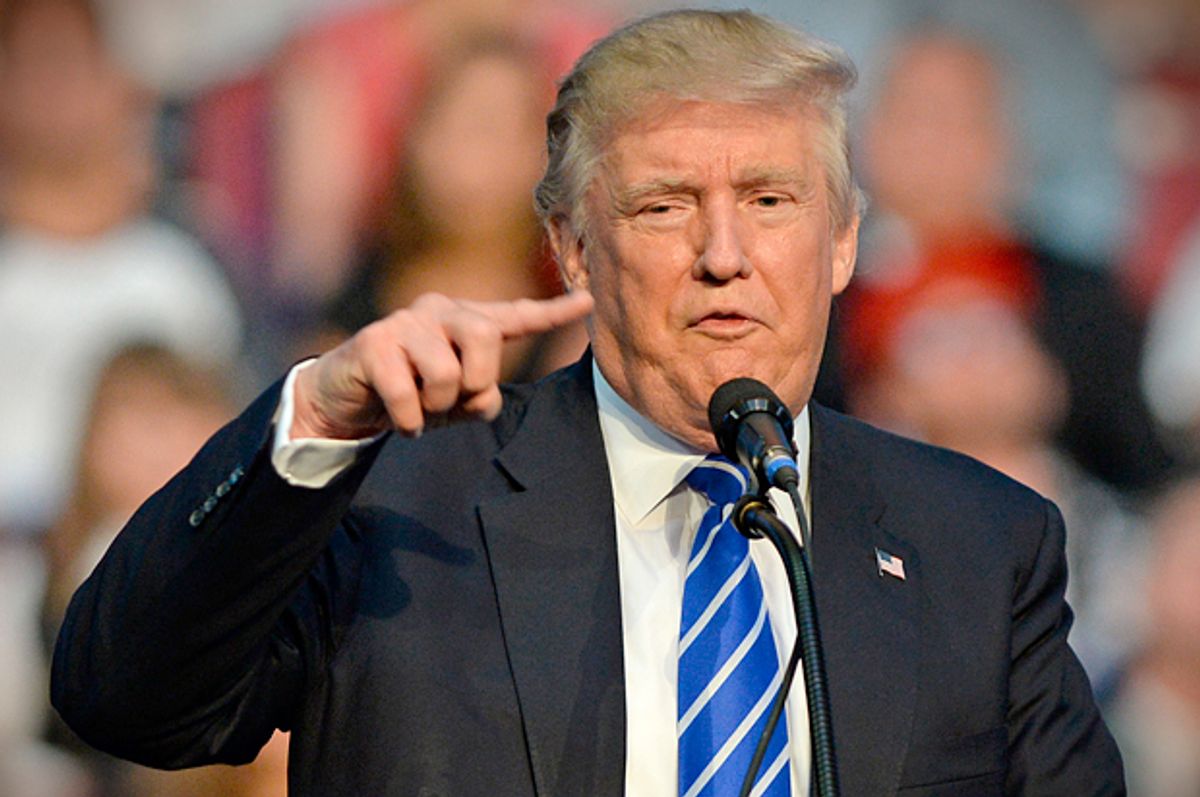 Late last week, Public Policy Polling dropped the results of its latest poll, with quite a few shocking-but-not-shocking results. Among supporters of Donald Trump in North Carolina, 48 percent blamed President Obama for the combat death of Humayun Khan, even though the Muslim-American soldier was killed in 2004 when Obama was a state senator from Illinois who had spoken out against the war. 36 percent, by the way, aren't sure whether Obama was to blame.

Likewise, 47 percent of Trump supporters claimed that they, too, watched nonexistent Fox News B-roll footage of $400 million being unloaded from an airplane in Iran, as Trump famously claimed to have seen. Worse, though unsurprisingly, 41 percent agree that Hillary Clinton is literally the Devil. As if that wasn't horrendous enough, 40 percent -- two out of every five Trump voters believe that ACORN still exists and is therefore plotting to rig the 2016 election in favor of Hillary Clinton. To repeat: ACORN doesn't exist, except in the twisted noggins of Trump's people.

Perhaps they missed the news. Shortly after President Obama's inauguration, a prankster named James O'Keefe released a series of fraudulent videos alleging to show how the community organizing group ACORN was engaged in voter fraud. The videos were aired practically around the clock on Fox News and throughout the conservative entertainment complex, and eventually members of Congress seized upon the controversy in order to push for the de-funding of ACORN. The problem? The videos were fake. Indeed, fact-checkers up and down the internet thoroughly debunked the videos, but it was too little too late. The lie had already become the truth inside the Fox News bubble, so congressional Republicans successfully blocked funding for ACORN and, in the process, bankrupted the organization, which filed for Chapter 7 liquidation in 2010.

The Republicans, however, continued to demonize the group as if it still existed by voting on further legislation to de-fund the group after it was already dead. Then, throughout the 2012 election, the GOP engaged in not-so-whispery whisper campaigns about ACORN tampering with that year's election as well. No wonder Trump supporters believe what they believe. They've been osmotically absorbing falsehoods for the better part of a decade.

Over the weekend, the Trump campaign (if one can call it a legitimate "campaign") rolled out a sign-up page in order to muster and deploy a goon-squad who will apparently monitor polling places on Election Day as a means of stopping "crooked Hillary from rigging this election." The Washington Post reported:

Anyone who fills out the form is added to a list of people who will be used to staff as many polling places as possible. Monitors will report any irregularities they observe to the strike force of lawyers, who, according to Evans, would be able to judge what was and was not a problem.

“I hope you people can sort of not just vote on the eighth [but] go around and look and watch other polling places and make sure that it’s 100 percent fine,” Trump told supporters in Altoona, Pa., on Friday. “We’re going to watch Pennsylvania. Go down to certain areas and watch and study, make sure other people don’t come in and vote five times.”

It's unclear what Trump's goons will achieve since they won't be allowed to electioneer inside polling places. Mainly, Trump's call-to-action is the newest prong in his defeatist plan to delegitimize the would-be Clinton presidency by laying the groundwork for a fraudulently achieved victory.

One thing's for sure: in addition to preemptively insisting without evidence that Hillary will try to rig the election, Trump is giving his people a blank check to intimidate voters any way they see fit, beginning with shouting incoherent platitudes at Hillary voters — disrupting what would've otherwise been an orderly process in most cases. We can also count on the fact that Trump's people will target predominantly minority precincts due to the dual ACORN and Black Panther myths. With past as prologue, it wouldn't be unfair to predict episodes of violence breaking out on Election Day due to deranged white male Trump bros who realize, paraphrasing Elizabeth Warren, they're about to lose badly to a girl.

So, let's review. Trump needs thuggish poll watchers to serve as potentially illegal bulwarks against fraud that doesn't exist — fraud that's allegedly perpetrated by an organization, ACORN, that also doesn't exist. Put another way, Trump's goons will defy the law in an attempt to thwart nonexistent voter fraud by nonexistent ACORN so a woman who they believe is the Devil, an entity that doesn't exist, won't be elected. Get that? This is only one of literally hundreds of examples illustrating Trump's berserker campaign, and it's only August.